Home Cultural A Journey of Tea 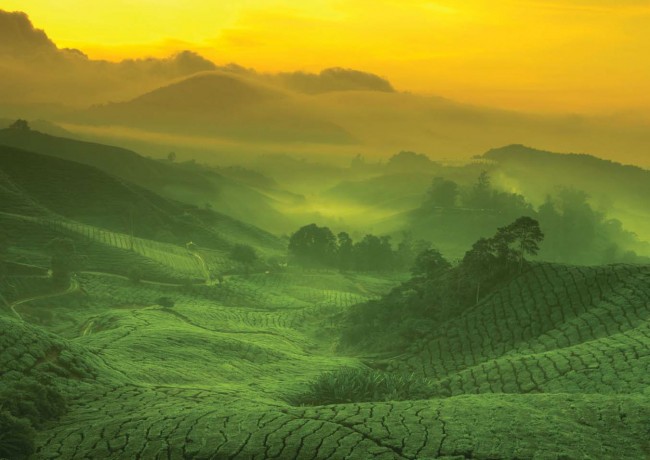 The production of tea leaves and the drinking of tea has a long history in China. The camellia sinensis plant species which yields tea was first cultivated there 4000 years ago. In Europe, Britain has the largest tea-drinking population, consuming an annual average of 2.1kg of tea leaves per capita. Tea is offered everywhere in Britain, from the smallest café to the most luxurious hotel. The typical British tea is red tea, most often consumed with milk and sometimes sugar. Tea and tea-related culture was originated from China.

According to Chinese legend, wild tea leaves were said to have fallen into the boiling water pot of Emperor Shennong (2737 B.C.), known as the Emperor of the Five Grains, and this began the practice of drinking tea. Shennong was a legendary ruler who taught the ancient Chinese practices of agriculture and the use of herbal drugs. “Tea” is pronounced “cha” in China and also in several other Asian countries. The word “tea”, used in western countries, derives from “te” of the Xiamen dialect, which originated in Southern Fujian Province.

During the Han Dynasty (206 B.C. – 220 A.D.), tea was used as medicine. The use of tea as a beverage consumed for pleasure on social occasions dates back to the Tang Dynasty (618–907 A.D.). This tradition has developed through the centuries to be a refined, elegant, and intricate ritual.

At the beginning of the 17th century, Dutch and Portuguese traders brought tea leaves to Europe. At that time, tea leaves were a rare luxury and highly priced. In the middle of the 17th century, Queen Catherine of Braganza (1662-1685), wife of King Charles Stuart II, introduced the ritual of tea drinking to the British court. Very soon, the women of high society started to serve tea to their guests. Along with the tea, of course, the “china” used for serving the tea was also imported from China.

With the expansion of transportation both by land and sea, tea became more readily available, and tea eventually replaced beer as the most consumed beverage in Britain. The East India Trading Company established tea farms in India and that was the time the British acquired the taste for Indian black tea. Tea leaves
were transported by large wooden ships called Clippers. The most well-known, the Cutty Sark, is still exhibited in a dry dock in Greenwich, in southeast London. With the opening of the Suez Canal into the Mediterranean Sea in 1869, and the invention of steam boats, the Tea Clippers became a thing of the past.

Founded in 1707, Fortnum & Mason of Piccadilly, became the major tea retailer in London. In 1871, Thomas Lipton in Glasgow, Scotland, opened his first tea shop and established the Lipton tea brand.

There are three basic kinds of tea: oolong tea, black tea and green tea. Currently, the most popular teas in the UK are: PG Tips, Tetley and Typhoo.

Tea drinking is a major aspect of British life. This is illustrated by young British children’s love of tea-related nursery rhymes, such as “Polly put the kettle on” and “I’m a little teapot!” Tea also features in modern pop songs, for example, in ”Lovely Rita”, the well-known Beatles song: “Lovely Rita, meter maid, / May I enquire discreetly, / When are you free to take some tea with me?” “Englishman in New York” by Sting begins with, “I don’t drink coffee / I take tea my dear.” In the UK’s TV series East Enders, whenever a critical situation arises a character is seen pouring a cup of tea. When interviewed by a TV program host, singer Boy George said, “Sex? I’d rather have a cup of tea.”

Tea is rooted in both Chinese and British tradition, over which wonderful conversations and friendships begin and flourish.