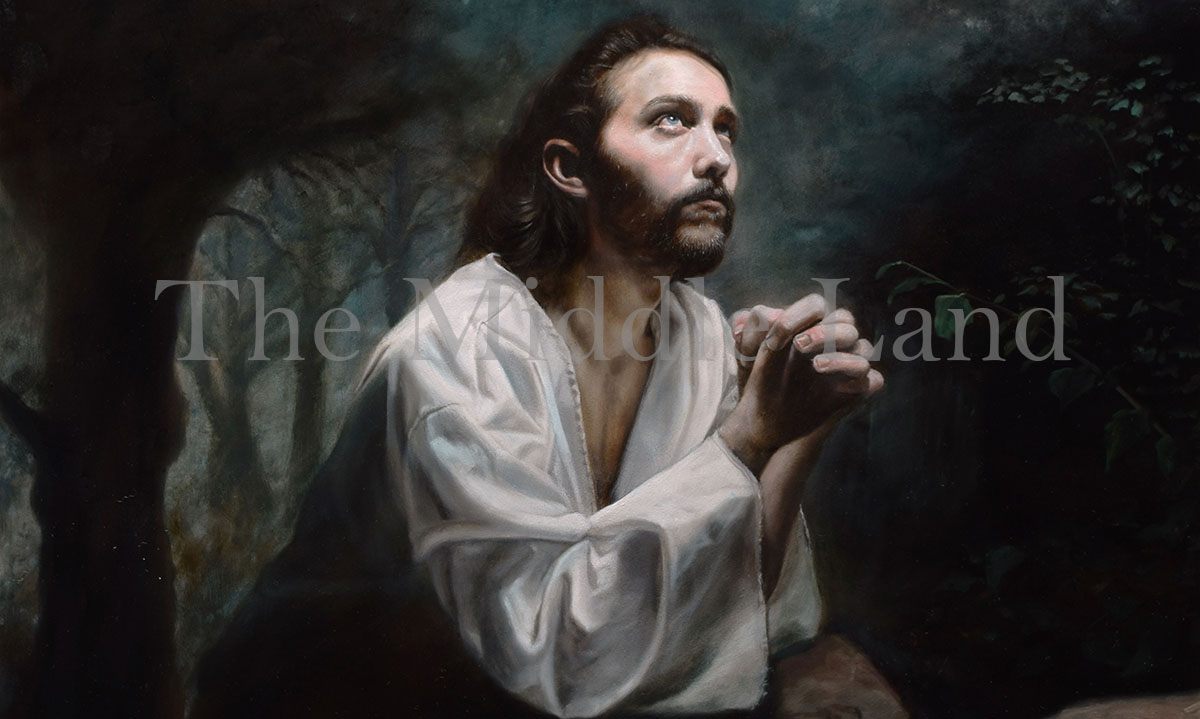 Eric Armusik is passionate about depicting complex and dramatic narratives to celebrate the joy and sadness of human experience. Agony in the Garden is really about Jesus, his passion and his suffering.
By Lillian Zheng May 28, 2021 7:14 am PST
Facebook
Twitter
SHARE
Facebook
Twitter

There were many miracles that occurred during Jesus’ earthly time. To remember, his disciples painted images on caves, walls, wood and canvas. From the Annunciation to the Crucifixion, the picture of his childhood with his mother has been one of the most celebrated artistic subjects.

Today, we see such artworks in museums and heritage sites. However, those ancient masterpieces tend to leave 21st-century viewers with little to relate within today’s modern existence. 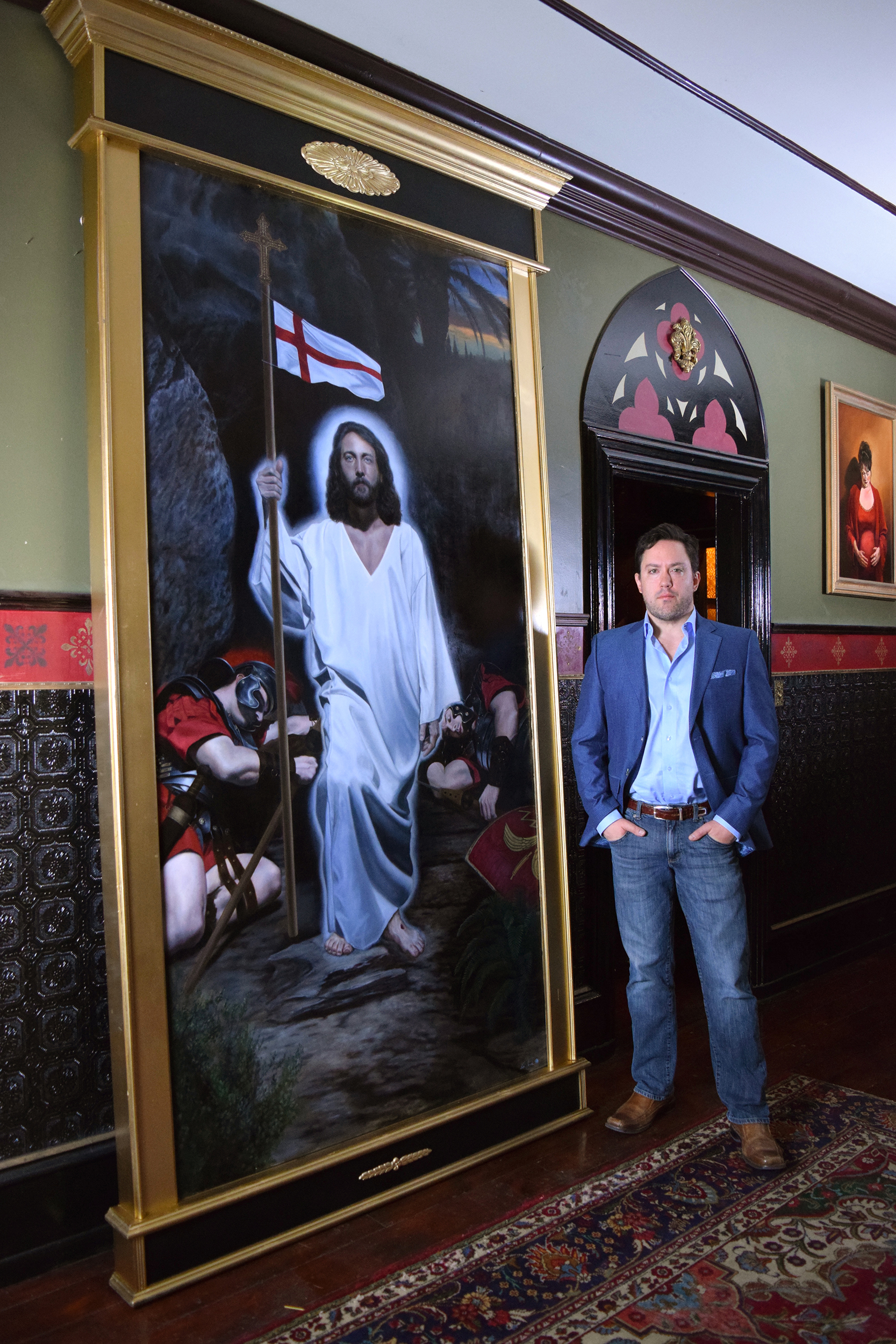 Listening to an hour-long introduction audio or reading museum brochures, one might still only learn that these are important museum pieces to be treasured. But the question of how to truly appreciate them still exists.

Fortunately, there are modern day artists that seek to make that connection.

Eric Armusik, for example, depicts a remarkable presence of humanity through Jesus communicating with God and choosing to suffer for all of mankind. Armusik was able to capture that very unique moment through his epic painting, Agony in the Garden. He paints a divine son, Jesus, in his full submission to God, while preparing to make his emotional final sacrifice in human form.

Jesus’ last conversation with God, before the Crucifixion takes place, is, in fact, one of the core moments of Christianity, and should perhaps be the most celebrated among Christian art. Jesus’ ultimate suffering, and his willful decision to do so laid the fundamental path for Christianity; without which, the whole Christendom would not likely exist.

There are few surviving paintings of Agony in the Garden. One notable work is that by Giovanni Bellini. Completed around 1455 -1465, the painting was beautifully done in its time, with Renaissance details, beautiful color, and wide landscape. A dozen figures, including Jesus and his three disciples, along with the approaching soldiers, were purposely arranged to bring us to the final hours of Christ’s time on earth. The painting took on a great deal of metaphor through its sceneries, plants, objects, villages, sky, etc., but one can only admire the back of Jesus under his cloth.

For Armusik, the depiction and understanding of Jesus during this crucial time could not be left up to metaphor. As he puts it, “If I knew that my mission was going to die tomorrow horribly, to be tortured to death; if that’s what I was thinking, how afraid would I be, what were my emotions to be at the moment?”

Created in 2016, Armusik’s work doesn’t reference any of the paintings in the past or present, not even the storylines and figures, which have been painted so many times. A self-taught oil painter, Armusik was determined to bring the story to life and make it more understandable for us today. “I don’t want to create art that is unapproachable.” Armusik noted.

Many masterpieces take years of concentration and single-minded effort to complete, but some amazing works are done by relying on sheer inspiration. Armusik doesn’t like over-idealizing the subject as others do but instead chooses to follow his inspiration with the idea of sacrifice. 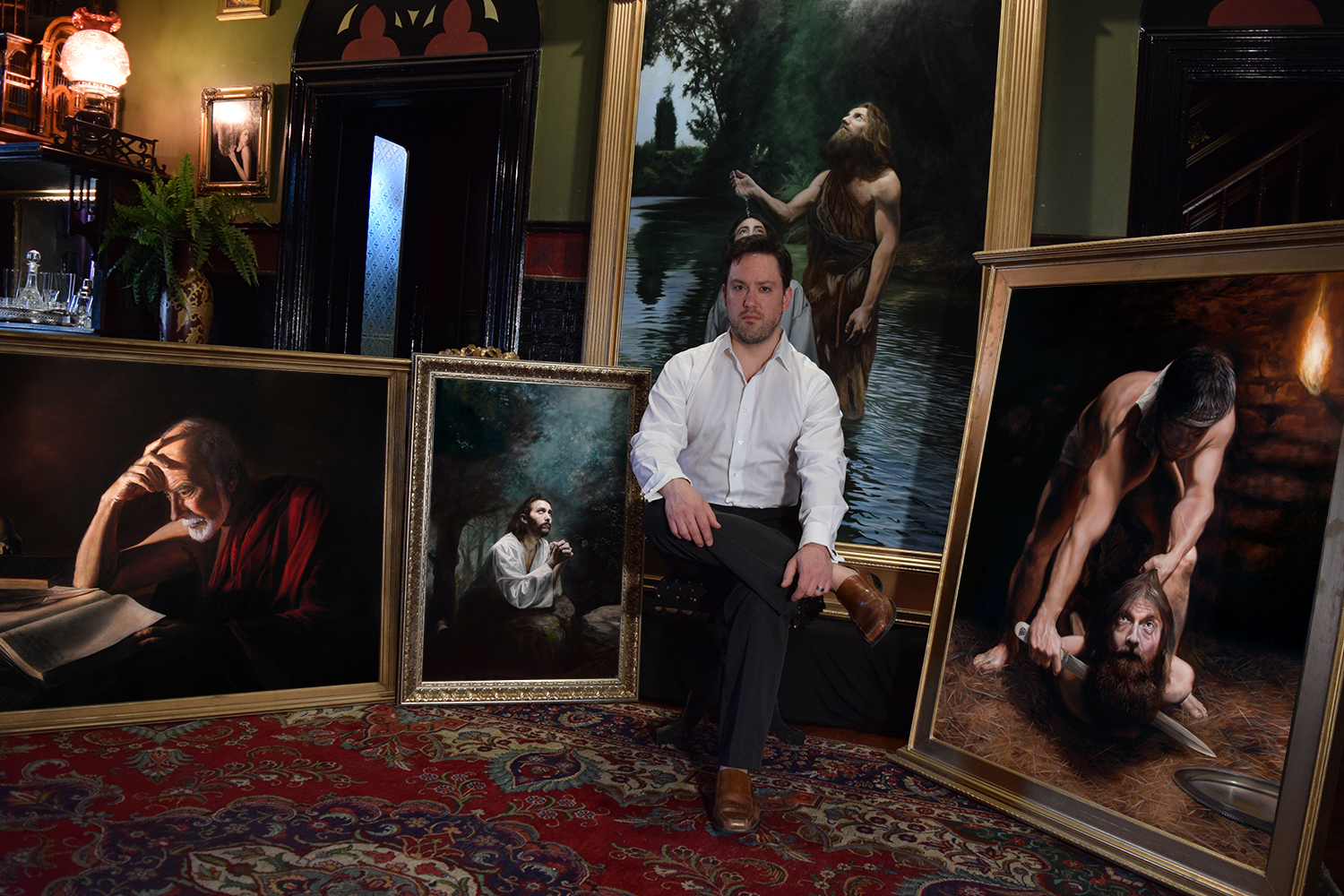 For Armusik, whether it is historical figures like Jesus or Ghandi or military figures who became noteworthy for their enormous bravery, they all represent something profound. “There is a universal communication,” Armusik contends, “something very beautiful. Sacrifice is a beautiful thing.”

In 1991, a then 20 year-old Armusik first entered art school, wanting to learn classical fine arts. However, in his first days, it was strongly suggested that he should seek an outlet for his creativity in ‘modern’ trends.

While Armusik didn’t receive classical art training at school, he eventually had an opportunity to spend a semester in Italy. He was able to visit with many Renaissance masters’ works and learned great deal. That trip reconfirmed his pursuit of true classical skill, and the arts of Renaissance. 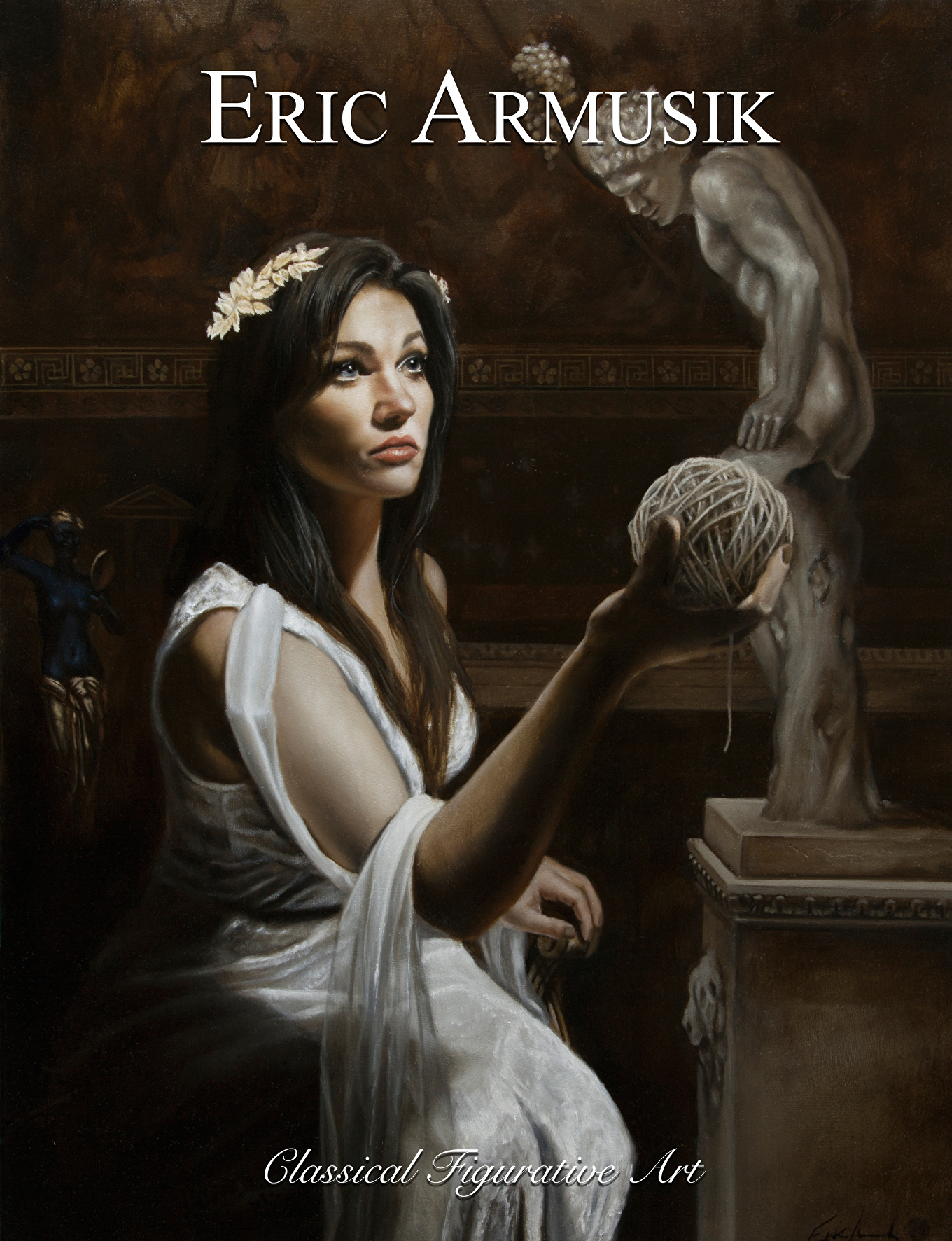 “If people don’t like traditional arts, why do they go to Louvre, Italy.” noted Armusik. “I’ve seen responses to my paintings over the last 25 years, it shouldn’t be surprising that people are drawn to tradition.”

After graduating from art school in 1995, Armusik set himself on the path to becoming a professional oil painter. To survive, he took design jobs during the day, and painted from 8pm to 2am, constantly practicing and creating classical style art. That 4 hour sleep nights lasted for quite some years, while raising a family of five. The trying life of an artist led to continual growth for Armusik, and allowed him to become a productive and unique painter.

By the time Armusik quit his design job, he was making more money through painting, his true passion, than from computer design. Today, he receives commissions from all over the country, and works diligently to make each customer happy, and never miss a deadline. Though, there were constant challenges by being a professional artist, for Armusik, his work is a source of continual gratitude. “It doesn’t matter if it is a good day, or bad day,” he declares, “being able to create is a blessing.”

To create his work, Agony in the Garden, Armusik hired a model to act out in front of him, so he could examine that last hour’s emotion with a deeper sense of humanity. “Jesus was still a human being,” Armusik stated, “a half human being here with us on earth. He is experiencing these hardships, at that moment, even as the most perfect person, he had doubts, he was worried, he was afraid. He was looking for that inner courage.”

In about a month, employing ancient techniques, and with a heightened spiritua perception, Armusik was able to depict Jesus in flesh and blood figure on earth. His face in a glowing tone turned toward us, his hands together in prayer. Jesus has no halo but adorns a simple white cloth, surrounded by an unknown landscape and darkness.

This historical moment has been depicted in many past works. With Bellini and other artists – Jesus’ sleeping disciples, including Judah, who betrayed Jesus and led roman solders to arrest him, were all detailed in their paintings. If the title, Agnoy of the Garden is really about Jesus, his passion and his suffering; and if the old masters’ paintings were aimed at reminding people about their relationship with God, Armusik’s painting is certainly about reconnecting our soul with the divine.

Among his most unique details, and most unconventional, is the painting of Jesus’ crystal clear eyes as they meet with the divine light of his prayer. In the darkness, he is shrouded with divine light, receiving his inner courage, strength, and resolve to fulfill his mission. This emotional highpoint connects Jesus with his father, God; and at the same time, connects us with Jesus.

Armusik is seemingly one of the first artists to capture this perpetual moment of human struggle, epitomized through Jesus, in his search for the courage and solemn ability to overcome such great tribulation, to choose the harder path, and ultimately be able to walk on the righteous journey.

Armusik’s painting has received a worldwide recognition. People of different faiths, backgrounds, and education have written to him and expressed their appreciation for his understandable and emotionally accessible depiction of Christ.

Thousands of years ago, Jesus made a difficult choice. Today, Armusik uses his artistry to celebrate that moment, and convey to the world that each of us is capable, with a single resolute thought, of making our own difficult choices, embodying heroism, and even connecting with the divine.