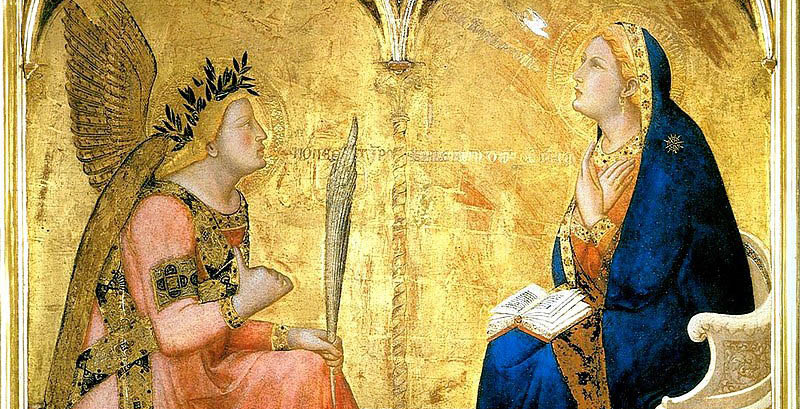 After the departure of Simone Martini to Avignon in 1336, Ambrogio established a workshop in Siena. His elder brother was the painter Pietro Lorenzetti. They were the first Sienese to adopt the dramatic quality of the Tuscan sculptor Giovanni Pisano and the naturalistic approach of the Florentine painter Giotto. In their experiments with three-dimensional, spatial arrangements, the brothers, particularly Ambrogio, foreshadowed the art of the Renaissance. Ambrogio, more realistic, inventive, and influential than Pietro, is best known for the fresco cycles Good Government and Bad Government (1338-39, Palazzo Publico, Siena), remarkable for their depiction of character and of the Sienese scene. He also painted Presentation in the Temple (1342, Uffizi, Florence) and Annunciation (1344, Pinacoteca, Siena). His work includes also the altarpiece Madonna and Child with Saints (1320, Santa Maria Della Pieve, Arezzo), dramatic frescoes in the lower Church of San Francisco in Assisi, and the Birth of the Virgin (C. 1342, Opera del Duomo, Siena).

The peaceful and gently lyrical temperament of Ambrogio Lorenzetti is in complete contrast to bis brother’s fiery and often intensely dramatic spirit. Vasari did not realize that the two were related, and wrote of Ambrogio that bis manners “were. .. more those of a gentleman and philosopher than those of an artist,” and he speaks about his love of literature and bis intellectual acumen, qualities that enabled him to turn bis hand both to sacred painting and to historical, allegorical and other “profane” themes, to pick up hints from classical antiquity and from the fabled Orient, to be a cosmographer and cartographer, and above all to bring profundity and boldness of ideas to bis work, and to revolutionize accepted notions of iconography.[1]

The Annunciation (1344). In this late and highly finished work Ambrogio abandons his usual earthy depiction of realistic and human detail in favour of emphasizing the almost Gothic elegance of the two characters. They face each other across a floor that is, however, painted in rigorous perspective. The signed and dated painting was executed in 1344 for the City Council of Siena.The Annunciation is one of the five signed and dated works of Lorenzetti, the last in chronological order, and therefore a valid reference point for the dating of the remaining works attributed to this artist. Ambrogio Lorenzetti’s Annunciation (…) has been justly acclaimed by contemporary scholars as one of his finest creations. It has also received a fair amount of criticism. In particular, scholars have faulted the heaviness of the figures, the awkwardness of Gabriel’s gesture, and his diminutive extended wings, which have been roundly condemned as a crude restoration.[6]

Allegory and Effects of Good and Bad Government

The Allegory of Good and Bad Government is a series of three fresco panels painted by Ambrogio Lorenzetti between February 1338 and May 1339. The paintings are located in Siena’s Palazzo Pubblico—specifically in the Sala dei Nove (“Salon of Nine”), the council hall of the Republic of Siena’s nine executive magistrates, elected officials who performed executive functions (and judicial ones in secular matters). The paintings have been construed as being “designed to remind the Nine [magistrates] of just how much was at stake as they made their decisions”.Considered Lorenzetti’s “undisputed masterpiece”,
the series consists of six different scenes (the titles are all modern conveniences)

The Allegory of Good Government carries a strong social message of the value of the stable republican government of Siena. It combines elements of secular life with references to the importance of religion in the city at the time. While classified as medieval or proto (pre)-renaissance art, these paintings show a transition in thought and an evolution in theme from earlier religious art.

The Allegory of Good Government depicts the personification of Justice as a woman. She gestures to the scales of balance, held by the personifcation of Wisdom floating over her throne. On the viewer’s left, a convicted criminal is beheaded; on the right, figures receive the rewards of justice. At Justice’s feet, the personification of Virtue, also, unusually for the time, portrayed as a female figure, passes virtue among twenty four faithfully rendered and recognizable images of prominent male citizens of Siena. The men face towards the largest figure in the image, a judge located in the center right. The judge is surrounded by additional personifications including Peace, who is represented as a fashionable, white-clad contemporary female figure with elaborate blonde hair. (Then as now, blonde hair was fashionable and seldom entirely natural; it was not the dominant natural hair color for Italian women from this region, and it was common for women to lighten their hair by streaking it with urine and heating it in the sun.)

The allegory carries a strong social message of the value of the stable republican government of Siena. It combines elements of secular life with references to the importance of religion in the city at the time. The figure of Justice resembles the figure of Mary, Queen of Heaven, the patron saint of Siena, on a throne. The Judge reflects the tradition in the Christian Last Judgment to have God or Christ judging the saved on the left; the damned on the right. While classified as medieval or proto (pre)-renaissance art, these paintings show a transition in thought and an evolution in theme from earlier religious art.

Flanking the Allegory are two other paintings on perpendicular walls: Effects of Good Government and Effects of Bad Government. Both these frescoes depict a recognizable view of Siena and its countryside.

In the allegorical representation of Good Government, the prosperous townspeople are trading and dancing in the streets. Beyond the city walls is a lush countryside in which crops are harvested.

In the allegory of Bad Government, crime is rampant and diseased citizens roam a crumbling city. The countryside suffers from drought.

Allegory of the Good Government, fresco in the Palazzo Pubblico, Siena

Ambrogio Lorenzetti frescoed the side walls of the Council Room (Sala dei Nove) of the City Hall, the Palazzo Pubblico, of Siena. The subject of the frescoes are the Good and Bad Government and their effects on the life of the cities and villages.
The Allegory of the Good Government is situated on the smaller wall opposite to the windows. The composition is built up from three horizontal bands. In the foreground the figures of contemporary Siena are represented. Behind them, on a stage, there are allegoric figures in two groups, representing the Good Government. The two groups are connected by the procession of the councillors. The upper band indicates the heavenly sphere with the floating bodyless ghosts of the virtues.

The enthroned man on the right side of the middle band represents the city of Siena and embodies the Good Government. Around his head the four letters C S C V (Commune Saenorum Civitatis Virginis) explain his identity. At his feet the two plating children are the sons of Remus, Ascius and Senius, the founders of Siena according to the Roman legends. On both sides of Siena the virtues of Good Government are represented by six crowned, stately female figures: Peace, Fortitude and Prudence on the left, Magnanimity, Temperance and Justice on the right. On the far left of the fresco the figure of Justice is repeated as she is balancing the scales held by Wisdom.

The Effect of the Good Goverment is situated on the longer wall of the room. This panoramic fresco represents several scenes indicating the life of Siena and its environment in the 14th century. This detail shows the centre of the city. In the middle the dancing young women probably represent the nine Muses. There are several genre like scenes in the picture (shops, chatting men, riders, working men on the roof etc.)

On the wall opposite the Effect of Good Government and to the left of the Good Government Ambrogio painted another fresco called Bad Government and the Effects of Bad Government on the City Life, which uses the same forms and compositional devices as the other frescoes in the room, but inverts them. The malevolent-looking figure representing Bad Government, pointedly labeled as Tyranny, is enthroned and stares hieratically out at the observer.. Neither male nor female, it is fanged, cross-eyed, and porcine, clearly bloated with corruption. In place of the cardinal virtues, personifications of Avarice, Pride, and Vainglory fly over its head. Tyranny is flanked by clearly labeled seated figures representing Cruelty, Treason, and Fraud at the left, and Frenzy, Divisiveness, and War at the right. A bound figure representing Justice lies at its feet. The city to its left is falling into ruin, robbers roam the streets, and, in the foreground, a group of ruffians drags a woman by her hair. Even in its now ruinous condition the image conveys a dire warning.

In the hilly countryside the only activities are ones of death and destruction, setting fire to isolated houses and whole villages. The countryside is bare and barren, the trees bear no fruit and no one is cultivating the land.
The Allegory of the Bad Goverment is situated on the wall opposite to Allegory of Good Government. At the centre of the dais sits Tyrannia, with the appearence of a demon, with horns and fangs. The figure of Tyranny has flowing woman’s hair, a cloak with gold embroidery and precious stones, a gold cup in her hand and a goat, the traditional symbol of lust, at her feet. Below is the vanquised Justitia: the scales are broken and scattered around her on the ground. Around Tyranny’s throne are gathered the Vices.

The Museum of Sacred Art, organised within the museum complex of San Pietro all’Orto in Massa Marittima, houses one of the most well-known Italian paintings from the Middle Ages: the Maestà by Ambrogio Lorenzetti, one of the greatest interpreters of 14th-century Sienese painting. Ambrogio Lorenzetti followed the examples of the Maestà representations by both Duccio and Simone Martini.

This masterpiece was created during the mature years of the painter, who united a vibrant feeling of maternal love with customary medieval symbols, particularly in the pose of the Madonna, who is about to seal her deep bond to the Child with a kiss. The Madonna is seated on an original throne composed of the outspread wings of two angels. The throne is set on the last of three steps, upon which are sitting personifications of the three theological virtues. The figures represent: Faith in white, Hope in green and Charity in red.