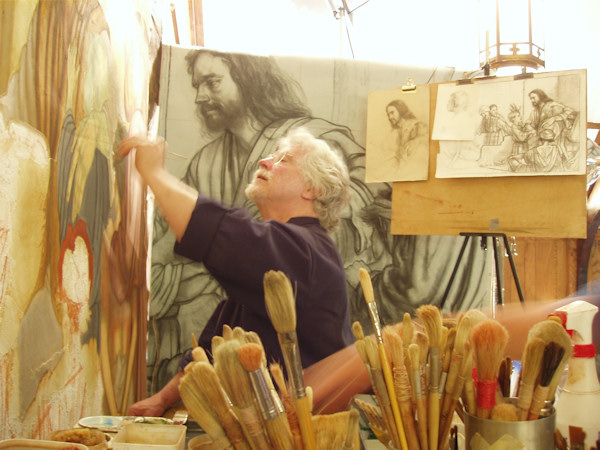 Master Ben Long, the renowned Renaissance skilled artist, has achieved a lifetime of accomplishments in oil painting and fresco around the world. He is one of a few living artists who directly apprenticed under the world-famous Italian Maestro Pietro Annigonsi, who reconnected modern-day painting with 500-year-old Italian renaissance techniques.
By Lillian Zheng, Ben Long March 30, 2020 10:41 am PST
Facebook
Twitter
SHARE
Facebook
Twitter

When Ben Long landed in Florence, Italy in August 1969, he found himself in a half-empty Renaissance town, where most locals had left for a traditional holiday to escape the sweltering heat, and he was mainly confronted by the sluggish ebb and flow of tourists. This voyage seemed to Ben Long, at the time, to be his final serious effort to commit to his fate to be an artist and find a true Maestro.

Four years earlier, 20-year-old Ben Long, dressed in his “Sunday best,” showed up at the door of the famous American artist, Edward Hopper, in Washington Square New York City on a bright Sunday afternoon – after church and dinner time – in the high hopes of introducing himself. A lady in a bathrobe opened the door, her expression quickly transforming from pleasant curiosity to sheer anger at his greeting, and said to this awkward stranger, “How dare you come to the home of a famous artist unannounced!” He caught a glimpse of Edward Hopper, old, frail, lying on the couch behind the bathrobed lady before she slammed the door. That day, a lesson was indeed learned.

Raised surrounded by fine painting, Ben Long was nurtured with a deep love for the Fine Arts of the Old Masters, in which most instruction seemed to have nearly disappeared in the United States, and was certainly difficult to find for a boy from North Carolina. In the last year of University, he discovered that good training could still be found at the Art Students League, the same art institution his grandfather, a very fine artist, had attended in 1911. Long went to The League and studied Anatomy and Drawing with the great teacher, Robert Beverly Hale, and studied painting with his first Maestro, Frank Mason. That time, a bit over a year, was a blessing for him.

And then the Vietnam War muscled into his life.

The choice was to be drafted into the Army or enlist himself. The Marine Corps had a combat art program that offered the possibility for Long to continue to follow his passion; so he became a Marine. He stayed in Vietnam for two and a half years as an infantry officer, and finally during the last six months, he served as a combat artist. With this last extension to remain in war, he was allowed a thirty-day leave. Long chose to go to Florence, Italy to seek out Maestro Pietro Annigoni, the world-famous artist, who had painted the Iconic Portrait of Queen Elizabeth II, an image displayed in every English embassy and consulate.

Ben Long had until the end of August 1969 to find and be properly announced to Maestro Pietro Annigoni. Exploring Florence, he found a sympathetic gallery owner who knew Annigoni and set up an appointment for Long just two days before he had to depart.

He met the Maestro, who asked to see the drawings done during the war, then said, although he no longer took on students, he would be willing to help him when he got out of the Marines. The Maestro said a warm good-bye and, with a twinkle, recommended that he should be careful and stay alive. The Maestro’s opened a door for Ben Long, and his life was forever changed.

Maestro Pietro Annigoni had a passionate, deep belief in the beauty of masterly drawing and painting, certainly more classical than academic, and definitely not of the open rebellion of 20th Century modernism. Surrounded by the great art of the Italian Renaissance, Maestro Annigoni had the powerful spiritual influences that inspired his own prodigious drive and great success. Maestro Annigoni was an artist, Ben Long felt, who had the wise gifts that might reveal a true direction into Fine Art. On the 1st of April, 1970 he began drawing Anatomical casts in Annigoni’s studio attic.

After a year of intensive drawing and the study of studio methods and materials, with much self-instruction into the craft of painting, Ben Long became fully involved in the art of fresco, working closely with the Maestro, who began a decade of steady large fresco commissions in Italy and the U.S. He became for the next seven years, “garzone”, or apprentice, along with Nando Bernardini, and later, Ugo Ugolini, the main Italian assistants. When the frescos were being made it was full-time daily work, for months at a time on each project. With this grueling schedule, one learned the subtleties of the craft.

On normal studio days, when the Maestro worked on other things, the schedule was 8:30 am to 1:00 pm six days per week. The afternoons were for the Maestro to work alone, and for Ben Long to do his own art in his studio, focusing on mainly learning to paint in oils. On Sundays, the Maestro would go out for the day and do oil landscape sketches, and Ben Long would happily go join the Maestro, to paint and closely watch his teacher. This was the true instruction, as in the studio, or at the fresco wall; to watch this great artists’ skill, his spirit, his attitude, his sincerity, fully embracing the mysterious meaning of being an artist.

One afternoon in 1978, two Italian monks knocked on Ben Long’s studio door. They were from the Abbey of Monte Cassino, founded in the early 6th Century by Saint Benedict. The Abbey had been bombed and left in rubble during World War II. Now it was completely and amazingly restored, except for the lost frescos. The monks asked him if he would consider a fresco commission to paint three walls in one of the chapels of the Basilica. Long of course, asked if they had first inquired after Maestro Annigoni. The monks said they were sent by the Masestro, who would in fact, do a large fresco later for the Abbey. So Long, accepted, sight unseen, no questions asked, and shortly after the visit, traveled down to Monte Cassino, to meet the Abbot, one of the twelve surviving monks of the WWII bombing, and to understand what would be expected in respect of their ways and the fresco needs. They were delighted that being an Episcopalian, Ben Long believed in Christ, and although not a Catholic, he was a step closer to being accepted by the monks. They left full creative control to the artist, who selected the Chapel of Saint John the Baptist, a sympathetic subject to all concerned.

Utilizing the skills and knowledge gained through his invaluable apprenticeship, Ben Long established his own creative process to produce some significant frescos in the world-famous Abbey that signaled a remarkable conclusion to his studies with his great Maestro, with whom a strong bond was forever formed.

The Maestro’s strong dictum: “If one can draw then why not draw all the time?”, is Love, in the flow of art. This always made clear sense to Ben Long, not as another person’s idea, but a nearly unspoken deep belief in both art and life.

For Ben Long, drawing is the forging engine of art, that leads to many methods of creativity. Long also believes that even if an artist is well trained, the artist must patiently and tenaciously trudge along in search to recapture, through the myriad diversions of art, that simple powerful moment of awe and wonder, that open his or her heart. To find that grace gives one the freedom of great art, beyond ambition, ego, or reward. To become a true artist, beyond all the hard work in a sacred and profound gift.