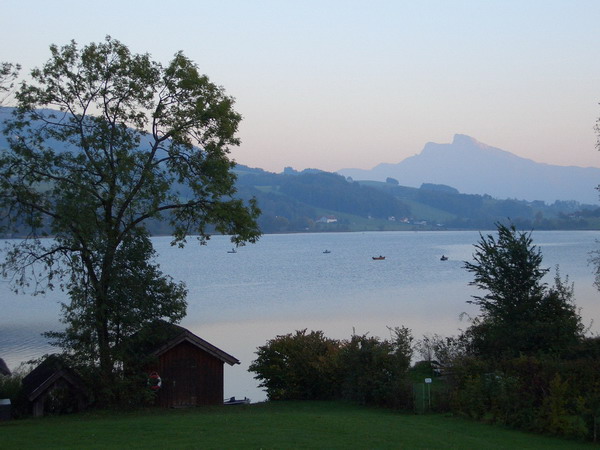 I received an opportunity to travel to Austria’s countryside for a work trip. The place that welcomed me was Irrsee, a lake 30 kilometers outside of Salzburg, Austria. At 1:14 PM on the 17th of October, I boarded the train Railjet 166 at Vienna’s Wien Westbahnhof railway station. The train headed for Zurich, Switzerland, a journey of 856 kilometers in total. My destination was the train’s third stop, Salzburg, 317 kilometers from Vienna, and I would be arriving after a journey of about two hours and forty-five minutes. It was plenty of time to watch houses and roads of Austria fly pass me, as if I was accelerating to enter another world.

The lodge I had chosen to stay in was Hotel Dorferwirt, an elegant white building with centuries of history with an unobstructed view of Lake Irrsee. It was built in 1550, the time when China was under the Ming Dynasty (1368-1644). It must be lonely for a hotel like Dorferwirt to spend 461 secluded years, 461 years of watching the same sunrise and sunset over the same lake, by the same hill, and under the same sky, day after day, year after year. The building has a lively spirit in it, I could see that, but she shows her animated and joyous side to the travelers arriving at her door while leaving the side of endless loneliness to herself. When I stopped before the building and engulfed myself in her sphere of quietness, I could only think of Sassoon’s famous quote, “In me the tiger sniffs the rose.”

When evening arrived, a few wooden boats slowly returning to dock, their bows slicing gently through the water. Some boats remained in the middle of the lake, rocking against the calm waves and as stubborn as children unwilling to return home from a playground. Maybe the people inside were having the time of their lives! If someone could play a tune of guqin to accompany the boats, I would be living in the European version of “Nightly Boat through Evening Song” (渔舟唱晚 Yu Zhou Chang Wan), letting the stream of music flow through the bay, sparkling it. Yu Zhou Chang Wan is a classic Chinese music, which depicts the atmosphere of someone playing the soothing tune with a guqin while a boat leaves the dock.

I sighed at that thought. Sometimes we can’t ask for too much.

At night, what entered my ears was not only the wind passing through trees and making the leaves rustle, but also the faint beats of a tireless musician playing drums. Despite it being almost twelve, the drum beats followed the rhythm of grievance, and one could listen to the beats for a long time without getting tired. The musician must be the victim of a disappointed love, I thought. I wanted to say to him that your music is marvelous, brother, but still get some sleep; what is ours is ours, and what is not will never be, then why bother trying?

As soon as morning arrived, I went out for a walk along a trail to explore the hills around. My quiet surroundings reminded me of my hometown: it was a place that has visited my dreams at night many times, a place that overlooks an ocean like the hotel overlooking the lake. I sniffed, but could not feel the moist, cool, sea-side air. Memory was a thin layer of mist, flying by before my eyes without a sound. When I wanted to reach out my hand to touch it, to feel my past, nothing was left among my fingers, not a single trace of the past. I sighed again, quickening my steps up a hill to enjoy the rising sun. The sun, as if sensing my regret, shedding its warmth and lights around me, to the land, the trees, the grasses, and the soil with its compassionate understanding.