Home Cultural Bin Chun: The First Man from the East to the West 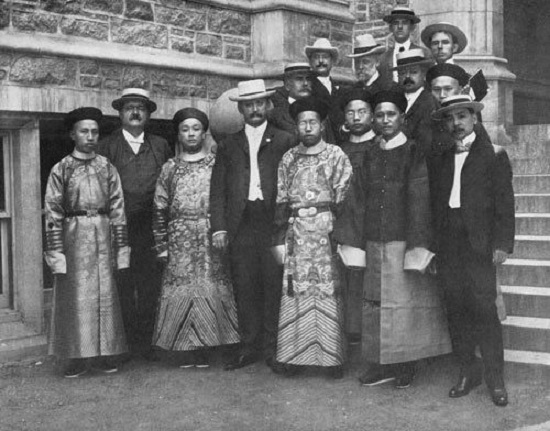 In 1860 the failure of the Second Opium War brought a complete end to China’s closed-door policy. The Qing government had to admit that the “heavenly dynasty” and other countries were equal, and at the same time recognized the advancement of Western military technology.  At this point, the Qing government’s attitude towards dealing with the so-called foreigners changed significantly. In many officials’ view, long-term and frequent exchanges with Western countries were inevitable, and it would be difficult to adopt a closed-door policy. However, the majority of them did not abandon the view held that China was a big country of “heavenly dynasty” and that the Chinese system and culture were better than others.  They were, however, very impressed by powerful foreign ships and armament, and therefore, advocated an introduction of Western military equipment, the establishment of military industries and military reform in order to make the country strong. Those officials – began the so-called “Westernization”, and included high ranking officials in the central government such as Yi Xin and Wen Xiang as well as border province governors such as Zeng Guofan, Li Hongchang and Zuo Zongtang. The view of Westernization was even accepted, to some degree, by the supreme ruler of the Qing Dynasty, Empress Dowager Cixi.

The previous foreign policy of “using one barbarian to control the other” was then replaced with “learning technology from the West to control the West”. Started in 1861, under the auspices of Yi Xin, a “Westernization Movement” involved in the fields of diplomacy, finance, education and the military was carried out inside China.  It was mainly an introduction of Western industrial machinery, science and technology. It also, established local military and civilian industry, developed modern transportation and communication facilities, and established the army with Western military equipment. First, the Qing government established the Prime Minister Office to deal with “Foreign Affairs” (Diplomatic Affairs) which included relations with the West and founding modern industrial process, etc. Yi Xin was appointed as the Prime Minister.  With the development of foreign relations, the Qing government also urgently needed to understand the situation in Western countries and send out its envoys.

In the spring of 1866, Hart, an Englishman serving as Inspector General of Customs of the then Chinese government, applied for six-months – leave to return home to get married. He suggested that China send a delegation to go with him to tour around Western countries to learn the political situation and customs of those countries. The purpose of obtaining reference – of domestic development – was strongly supported by Yi Xin. However, the issue of candidates comprising the delegates could not be settled for a while, because many people were afraid to go abroad.  At that time, a man named Bin Chun expressed his willingness to travel. He was 63 years old at that time.

Little is known about the life of Bin Chun as there was no record about him in the “History of Qing Dynasty”.  It is only known that he was an official outside the capital who later became a Chinese language teacher of Hart and was responsible for archives in the Prime Minister’s Office. After being in contact with Westerners for a few years, he gradually became interested in Western affairs and was willing to travel abroad to broaden his experience. When Bin Chun’s family and friends heard of his decision, they were very worried.  Someone discouraged him by quoting a phrase of “cloud & wind with dangerous waves” and reminding him about Su Wu’s detention carried out by Huns. But none of these things seemed to deter Bin Chun from his decision.

Soon after, five people including Bin Chun, three students from Tongwen Hall and his son who was responsible for caring for him, formed the first Chinese delegation sent abroad.  They followed Hart  with the important task of “recording in detail with drawings and explanation, everything they came across including the related topography, culture and customs to bring back to China as a token of proof”.  It can be said that Bin Chun was the “first person from the East to

Soon after, five people including Bin Chun, three students from Tongwen Hall and his son who was responsible for caring for him, formed the first Chinese delegation sent abroad.  They followed Hart  with the important task of “recording in detail with drawings and explanation, everything they came across including the related topography, culture and customs to bring back to China as a token of proof”.  It can be said that Bin Chun was the “first person from the East to the West” who was sent by the Chinese government to study Europe.  However, he was not an envoy.

Let us look at a few selected notes by Bin Chun. When he saw bikes in the streets of Paris, Bin Chun wrote: “people on the streets used a machine with only two wheels and a short axis.  They sat above the axis and their feet treaded a mechanism which made the wheels rotate automatically.  It was used as a vehicle. There was also a machine with only one wheel and an axis.  People used their two feet on each end of the shaft to move the machine.  Its running speed seemed like a Horse.”  Reading this people cannot help smiling. Bin Chun gave a very vivid account of a train “the vehicle in front as the steamer appliance, burning carboniferous, watering the wheels. At the back of the vehicle, there was a giant hook. 30-40 of carriages linked together. Different numbers of people, men and women, sit inside each carriage which looked like a house divided into three rooms and each room had a door.   After entering a room, it was found there were two Kangs (translator’s notes: a kang is a bed built with bricks), one on each side.  Inside a room, people could sit, lie down, eat, stand up, look around, or do anything they like.  Lower quality rooms were used as cargo containers. The worse ones were used to keep camels and horses. The train started to move after rattling three times. It was slow at the beginning but after a few miles, it was as fast as a running horse. Outside the train, houses, trees, hills and crossroads, were quickly passed by and could not be watched intently. “

Bin Chun recorded Western European portrait photography: “Western photography method, it intakes shadow into the mirror and prints images on paper by using drugs, a thousand copies all look very much like the same.” “Recently photographed in Paris, pictures were sold but negatives was kept, and people were queuing to buy them.  It was also said that the cost of a picture was fifteen silver coins.”  When he visited Germany and met with friends, the host and guests gave “camera pictures” to each other as gifts.

For the difference in Chinese and Western courtesies, Bin Chun also noticed that “When meeting, the Westerners shook hands to greet each other.  They sometimes kissed each other regardless of sex.” He also noticed the difference between Chinese and foreign handshaking and was very emotional about it: “Ladies are not scared of their soft hands being held by big men.  Shaking hands is considered as etiquette. “He – hoped that nobody would think -he was making improper advances to a woman by taking hold of her hand, because in western countries shaking hands is different from holding hands and does not signify any special affection between the two people”

When Bin Chun and other Qing officials met with foreign heads of state, they all shook hands with a bow to greet each other.  This kind of overseas experience had some invisible impact in changing greeting format from traditional kneel-down greeting.

Bin Chun appreciated very much what he saw and heard. For example, when he met Queen Victoria in London, the Queen asked his feelings, he replied: “Having been here for ten days I have seen that houses in London are very well built and the household appliances are well-manufactured.   They are more advanced than those in China, just as your system of government and administration is now more progressive and efficient than the Chinese counterpart”

The travel notes by “The First Man from the East to the West”, Bin Chun, has, for the first time, let the Chinese people understand European customs and the development of science and technology from multiple angles. His contribution is that he opened a window for the then Chinese people to understand the Western world.

It seems he was reinforcing the fact that shaking hands in western society was simply a normal greeting, and that he hoped nobody would read anything more into his taking hold of a woman’s hand.