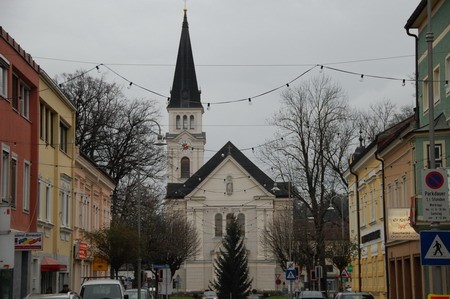 “Silent night, holy night! / All is calm, all is bright,/ Round you Virgin Mother and Child . . . .” This familiar Christmas carol is heard in every corner of the world on Christmas Eve and sung in all churches on Christmas in celebration of Jesus’ birth.

This world-famous Christmas carol, Silent Night (Stille Nacht), was brought to the world at St. Nicholas parish church in Oberndorf bei Salzburg, a small town in the Austrian state of Salzburg, also the hometown of Mozart. Having been around for 190 years, Silent Night was originally a poem written in 1816 by a young priest named Joseph Mohr.  Franz Xaver Gruber, a friend of Joseph Mohr’s, later composed the melody for the poem Silent Night. On Dec. 24, 1818 the carol was first performed at St. Nikolas parish church, accompanied by the guitar.

About 18 km north of the City of Salzburg, Oberndorf is situated on the river Salzach in the Flachgau district. Surrounded by greenery and lush mountains, River Salzach served as a canal in Medieval Europe that connected Western Europe with Eastern Europe east of Vienna. Once a vital part of the salt trade in the Middle Ages, Salzburg was a bustling and prosperous city. The parish church sits on the hill downtown in close proximity to the river bank. On the opposite of the river bank is the state of Bavaria, Germany.

With the passing of time and changes in climate, Salzburg was often been flooded, with River Salzach overflowing its banks. In 1901, the former St. Nikolas parish church was torn down and a house of prayer was constructed on the original site as a reminder of the birthplace of the Christmas carol, Silent Night. A new St. Nikolas church was reconstructed downtown 1.5 km away from its original site. Since the reconstruction in 1937, the Christmas Mass ceremony has been performed here.

Salzburg is swarming with worldwide tourists, particularly around Christmas, who hope to take a look at the birthplace of the Christmas carol. Over the weekends in December leading up to the Christmas Eve, each Austrian chapel holds a caroling session during which a play on the creation of the carol will be presented. Accompanied by the guitar, the authentic Silent Night takes center stage.