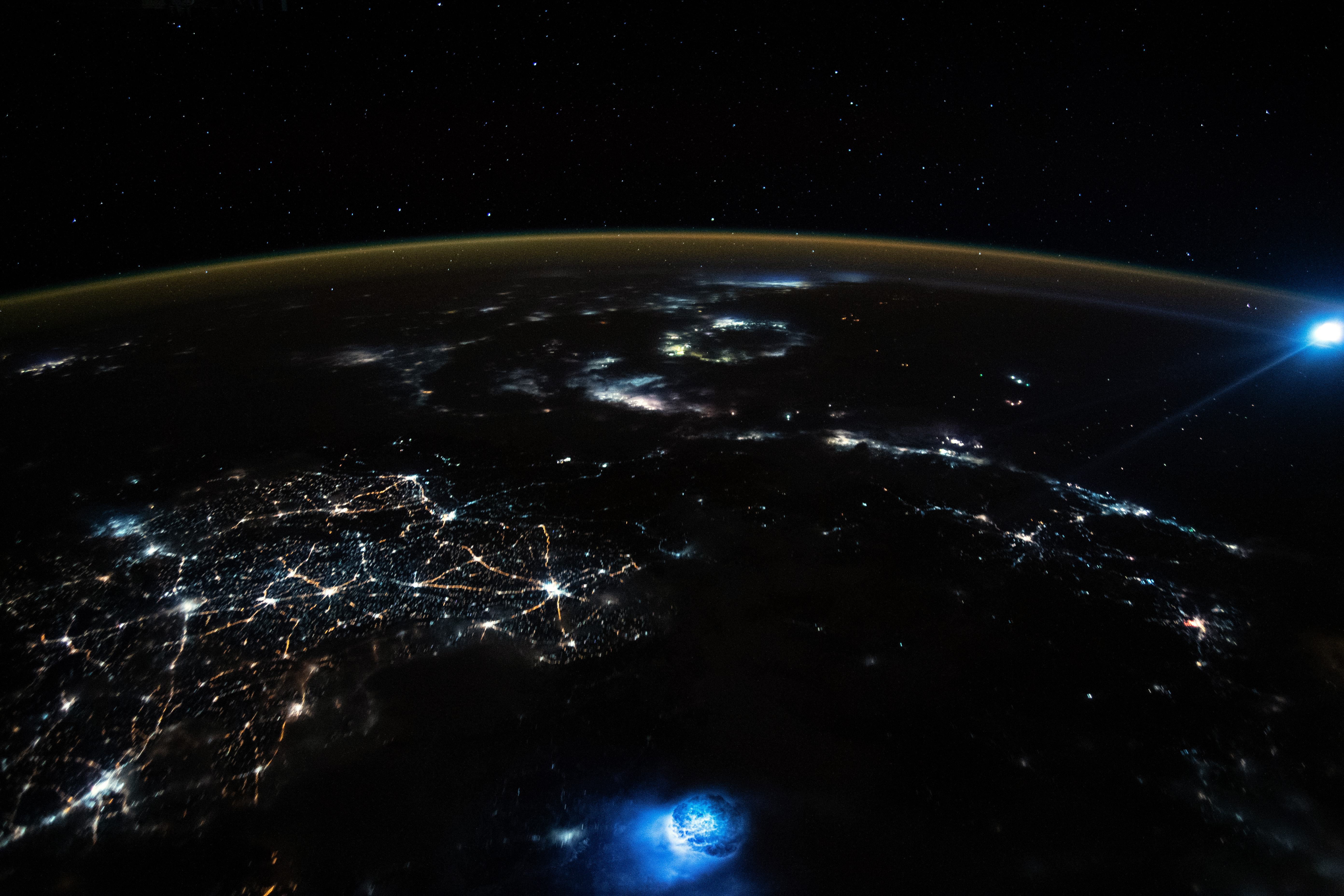 An astronaut onboard the International Space Station (ISS) has snapped a peculiar image of Earth from space that contains two bizarre blue blobs of light glimmering in our planet’s atmosphere. The dazzling pair may look otherworldly. But in reality, they are the result of two unrelated natural phenomena that just happened to occur at the same time.

The image was captured last year by an unnamed member of the Expedition 66 crew as the ISS passed over the South China Sea. The photo was released online Oct. 9 by NASA’s Earth Observatory.

The first blob of light, which is visible at the bottom of the image, is a massive lightning strike somewhere in the Gulf of Thailand. Lightning strikes are typically hard to see from the ISS, as they’re usually covered by clouds. But this particular strike occurred next to a large, circular gap in the top of the clouds, which caused the lightning to illuminate the surrounding walls of the cloudy caldera-like structure, creating a striking luminous ring.

The second blue blob, which can be seen in the top right of the image, is the result of warped light from the moon. The orientation of Earth’s natural satellite in relation to the ISS means the light it reflects back from the sun passes straight through the planet’s atmosphere, which transforms it into a bright blue blob with a fuzzy halo. This effect is caused by some of the moonlight scattering off tiny particles in Earth’s atmosphere, according to Earth Observatory.

Different colors of visible light have different wavelengths, which affects their interaction with atmospheric particles. Blue light has the shortest wavelength and is therefore the most likely to scatter, which caused the moon to turn blue in this image. The same effect also explains why the sky appears blue during the daytime: because blue wavelengths of sunlight scatter the most and become more visible to the human eye, according to NASA(opens in new tab).

Also visible in the photo is a glowing web of artificial lights coming from Thailand. The other prominent sources of light pollution in the image are emitted from Vietnam and Hainan Island, the southernmost region of China, though these light sources are largely obscured by clouds. The orange halo parallel to the curvature of the Earth is the edge of the atmosphere, which is commonly known as “Earth’s limb” when viewed from space, according to Earth Observatory. (Source:livescience.com)