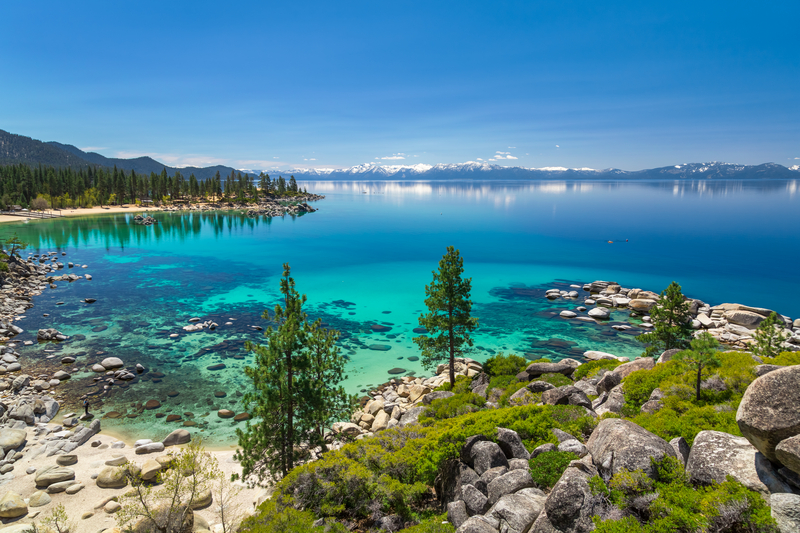 California is home to not only sunshine and beaches. Among the Californian trees, valleys, and mountains, rests more than 3,000 lakes. Some, like Lake Almanor and Lake Shasta, located in northeastern California, are artificial and act as reservoirs, but still possess natural beauty.  However, for those preferring natural lakes as destinations for camping, hiking, or boating, California also has a wide range of choices to offer. Below are a few of the best options for your next Californian outdoor adventure.

Situated on the easternmost side of California and in the picturesque Sierra Nevada Mountains, Mono Lake is a saline lake with over a million years of history. The lake’s water is almost three times saltier than ocean water, and a swim in the lake will offer a soft, floaty feeling that one  may also encounter at the Dead Sea. In addition, rising from the water surface are formations of limestone columns. These columns were formed completely naturally from the mixture of calcium in the underwater springs and the carbonate in the salt-rich lake water. Mono Lake also acts as  a retreat for wildlife. Those who are avid animal lovers, and especially bird watchers, will greatly enjoy the scenery here.  One to two million birds of 300 species come to Mono Lake to feed and rest, including Wilson’s Phalarope, California Gull, Snowy Plover, Sandpipers, and many more.

Goose Lake straddles the California-Oregon border, with the majority of the lake located in California’s Modoc County and a portion in Oregon’s Lake County. As part of the Modoc National Forest, wildlife such as mule deers and long-billed curlew can be found mulling around the water, while the lake itself is home to the beautiful redband trout. The stunning surrounding  forest makes the lake an ideal location for camping. For those interested in its history, Goose Lake witnessed the California Gold Rush, as the lake is right next to Fandango Pass, the route 19th century westward-settlers used to enter California and search for gold.

As one of the oldest natural lakes in North America, Clear Lake’s history dates back to the early Pleistocene, yielding a history dating as far back as 3 million years ago. Some call Clear Lake the “Bass Capital of the West,” since the lake supports a large population of fish, ranging from bass to crappie to catfish. Half a million years of sediments has given  the lake plenty of nutrients to allow plant life to flourish, thus keeping the fish population nourished and intact. Many merchants and guides at the lake provide fishing and boating equipment and support for those interested in adding these activities to their camping or hiking while visiting Clear Lake.

Clear Lake received its name from settlers in the late 19th century, who were fascinated by the clean air of the area. This part of California averages more than 250 days of clear sky in a year, and the lake water remains around a pleasant 76 degrees Fahrenheit  during the summer. The pleasant natural environment and weather makes Clear Lake a desirable retreat.

Like Goose Lake, Lake Tahoe also falls on one of California’s borders, with Nevada sharing a small portion of the lake. Located at  an altitude of more than 6,200 ft, Lake Tahoe is the largest alpine lake in North America. The lake has a majestic shoreline of 72 miles and has a surface area of 191 square miles. Besides having an expansive fish population, one can watch North American beavers build water dams near Lake Tahoe as well.

Because of the high altitude, the snow-covered mountains around Lake Tahoe provide great slopes for skiing. February is considered the best time to ski at Lake Tahoe, and there are more than 12 ski resorts located near the lake. Besides skiing, the lake’s clear water and dense trees make the local area suitable for boating, cycling, hiking, and many other outdoor mountain activities.

Being the smallest lake on this list—with only a surface area of 2.5 acres— Lake Helen is rested deep in the Lassen Volcanic National Park and has an altitude of more than 8,000 ft. The lake’s high elevation makes melted snow the main water inlet, categorizing it as a glacial lake. As a result, tourists can easily see the lakebed through the blue and clear water. What is even more magical is that during the winter, the lake is frozen. Lake Helen does not have many established recreation sites or buildings around it, which means  tourists will have to hike all the way to the lake and return to their cars on the same day. But it is the atmosphere of inhabiting  a completely isolated  glacial world that makes Lake Helen a worthy hiking destination.