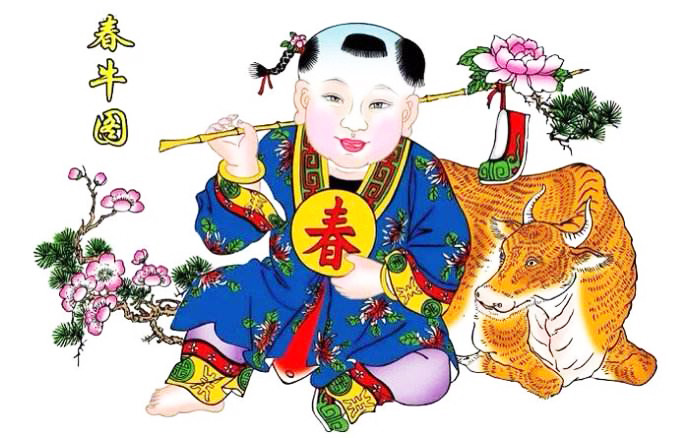 New Year’s Eve was a rare relaxing day for Emperor during the Northern Song Dynasty (960–1127). The Palace would hold a grand “Big Nuo” celebration to welcome gods and expel evil spirits. People wore different masks and paraded along the streets. At midnight, the sound of firecrackers from the Palace could be heard.

At midnight, people would begin to set off firecrackers to dispel ghosts and monsters. Since the invention of gunpowder during the Song Dynasty, firecrackers developed into paper tubes bundling gunpowder or hemp stems wrapping gunpowder that were compiled into strings to be fired together. They were known as compiled guns, and have been popular since. Chinese people long for the New Year filled with the sound of firecrackers.

After setting off firecrackers, people would return home to pay their respects to Heaven and Earth Gods along with their ancestors. Adults also gave children the New Year lucky money. Everyone would sit around to chat and play games throughout the night.

In the early morning of New Year’s Day, people would begin what was known as the “New Year Visits”. As for some high-ranking officials and noble lords, if they had too many neighbors, relatives and friends to greet door to door, they would send their servants with name cards, which were called “flying posts”, similar to today’s greeting cards.

Decorated tents were set up in the main streets of Kaifeng (the capital city during the Song Dynasty) where jewelry, clothes, shoes, cosmetics, flowers and toys were sold. Also, singing, dancing and acrobatic performances were held during the New Year street fair. People dressed in their new clothes to play and shop along the busy streets of the capital.

On this day, a grand morning meeting would be held in the Palace, where the Emperor would receive greetings from ministers and foreign envoys. Envoys from Liao, Western Xia, Korea, Uighur, Dali, Dashi and other countries traveled up to the Palace to pay respects and offerings. The Emperor of the Song Dynasty would reward the envoys with great treasures and useful country management books. After the morning meeting, envoys from different countries would tour and join in the festivities in the capital city.

The Lantern Festival is celebrated on the 15th day of the first month in the Chinese calendar. The night of the fifteenth is the first full moon of the New Year. During the festival days, tents would be set up in Kaifeng, where performances would be held with singing and dancing, as well as magic shows demonstrating feats of supernormal abilities.

On the first day of the Lantern Festival, the Emperor would visit the Xuande Building, where he would watch the folk customs through a curtain. A stage was also specially set up downstairs with armed Imperial Guards standing on both sides, where artists from the imperial music office performed song and dance, as well as drama.

On 16th of the first month, after breakfast, the Emperor would once again visit Xuande Building and meet people. After the departure of the emperor, all the official families would visit Xiangguo Temple. A music tent was set up in front of the main hall of the monastery, where artists performed music to spread compassion. During the New Year period, all monasteries in the city of Kaifeng would open for worshipping and burning incense for Buddhas, and the must-visit place for every family.

Uniquely designed lanterns in each horse shop, fragrant herbal medicine shop, tea house and tavern, often attracted passerbys to stop and admire them. In addition to enjoying the display of the lanterns, visitors could also enjoy a variety of food in the streets.

By 18th of the first month, all lanterns would have been removed, and the happy noise and excitement would not reappear until the following New Year.

Traces of customs from thousands of years ago can still be seen today, and the Chinese New Year remains a grand festival that stirs much anticipation around the world.