Home Cultural Art The Elegant Pottery Made in China Centuries Ago 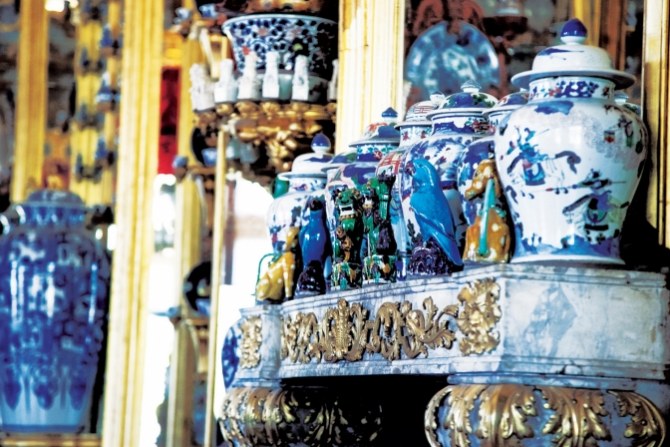 Rarely do modern people know the elegant crafts made in China centuries ago, before the communist era -1949. The pottery preserved by the German royal family serves as silent evidence of China’s past glory.

In English, China (the country) and china (ceramics), except the country is capitalized. One possible explanation is that when the elegant porcelain-ware from China was first seen in Europe, people cried out in admiration and saw it as representative of the country of its origin.

Pottery can be divided into earthenware and china. Earthenware emerged much earlier than china, and the production processes and raw materials differ between the two.

China is one of the earliest countries in the world to produce and use earthenware. Archaeologists have discovered earthenware dating back to ten thousand years in China. Even then, they were common daily essentials that one could not do without.

Clay is the raw material for earthenware. It is mixed with water and molded into shape. After drying, it is heated between 700-800 degrees Celsius. Some of the earliest earthenware included terracotta, gray pottery, and black pottery. Simple decorative designs were drawn on some of those earlier pieces.

Tang (618–907AD) tri-color glazed pottery is a type of low temperature glazed earthenware. It is a misconception that only three colors were used. Many colors were used but yellow, brown, and green were the main colors. Tang tri-color glazed potteries were mainly used in burials. They were brittle and easily damaged by water, and thus were not practical for everyday use.

Tang tri-color glazed potteries were mostly made into imitations of people, animals, and everyday tools. People and animal figurines buried with the dead were vividly colored, warriors were muscular, and ladies were graceful. Camel and horse figurines account for the largest number of the animals.

Why camels and horses? It is probably because they were the most valuable animals during those times. They were used for transportation, carried warriors across the battlefield, and helped farmers with soil tillage.

Tang glazed pottery-making reached its peak during the early- and mid-Tang dynasty. Production gradually declined with the weakening of the Tang imperial court. Its technology led the way for the advancement of pottery and porcelain making in later dynasties in China and other regions such as Persia, Arabia, New Rome, and Nara (Japan).

Fahua pottery from the Ming dynasty (1368–1644) is also low-temperature, glazed earthenware that was popular in the southern part of Shanxi. The methods of decorating Fahua pottery came from the Shanxi mural-painting method. A bag filled with clay was used like a piping bag to outline designs, the designs were then filled in with yellow, green and purple colored glaze. The pottery was fired at a low temperature. The Fahua potteries made in Shanxi were mostly small items such as flower vases, incense burners, and animals. Jingdezhen, a pottery center in Jiangxi, also made Fahua pottery around that time. However, it differed from Shanxi Fahua pottery. Jingdezhen used unfired porcelain, whereas Shanxi Fahua used pottery, and the firing temperatures were different. The base colors of the Fahua made at Jingdezhen were yellow and green, whereas Shanxi Fahua used purple and peacock green.

Exquisite and beautiful china represents a peak in the development of China’s pottery. This piece of Song dynasty (960–1279) china might have been a common item in every household, while today it is a priceless treasure. It’s a pity that Chinese people have lost most of their ancestral treasures and craftsmanship.

China, or porcelain, is made by molding china clay into desired shapes, glazed and fired at 1200 Celsius. You can hear a clear metallic sound if you tap a piece of china.

Porcelain was first made by craftsmen in Zhejiang province during the Eastern Han dynasty (25-220AD). Those first china had a blue tint. Black glazed porcelain was also successfully made around that time.

Compared with earthenware, porcelain is sturdier and more pleasing to the eye. Porcelain is far cheaper to make than bronze ware. The raw material could be found almost anywhere in China. Thus, porcelain became popular around that time and was used for everyday household purposes.

In the Wei-Jin (220-420AD) and Nan-Bei Chao (420-589AD) periods, the Yueyao ceramic kiln in Zhejiang province achieved the manufacture of very high-quality china. Its pieces had a signature blue tint.

White glazed china later appeared in northern China. This was the start of the popular phrase in describing Chinese porcelain: “Southern blue and Northern white”.

Along with tea and silk, china was exported to foreign countries through the Silk Road.

“Yuan Qinghua” porcelain was mainly made in Jingdezhen, Jiangxi province. Kilns in Zhejiang province and Yunnan province also made it.

Yuan Qinghua porcelain is relatively thicker, heavier and larger in size compared with other types of china. It was commonly seen as large bottles, jars, bowls, and dishes made in Tang or Song style.

The Qing dynasty took over the country in 1644. Porcelains decorated with enamel were signature pieces of this era.

Enamel-decorated porcelains have been used in the imperial court since the Emperor Kangxi (1661-1723) era. “Enamel” was handiwork made from copper, it was brought to China in the 13th century from Arabia. Chinese craftsmen incorporated enamel-making skills into Chinese porcelain. On the inside of enamel-decorated china, there is a layer of white glaze; on the outside, it is painted with flowers in rich colors of yellow, green, red, purple, etc.

China has a long history of pottery-making. Pieces from each era have their own characteristics. So what is your favorite style of pottery?