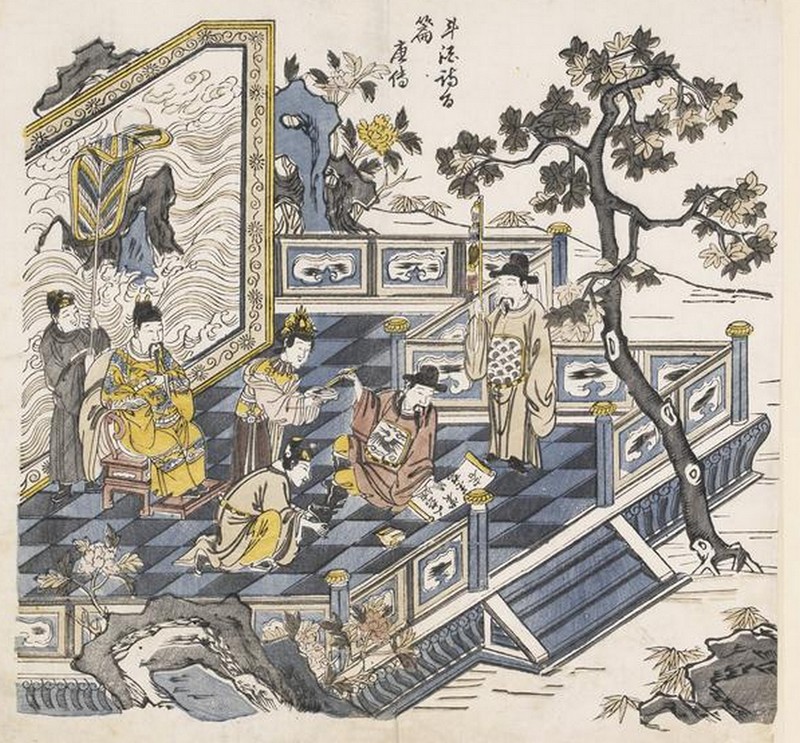 Isn’t it appropriate to use a flowery metaphor to describe poetry? If so, poetry from China’s Tang Dynasty (618 – 907) deserves the richest of descriptions. After all, the time of Tang was considered a Golden Age for Chinese poetry.

The Dynasty was renowned as a period of great progress and innovation; it was said to portray the highest expression of cosmopolitan culture throughout society.

Tang poetry has inspired poets through today. Perhaps the vital essence of the Dynasty transfers to the reader’s heart through the poets’ very words. This alone, makes Tang poetry valuable in modern times: It can awaken a busy mind to the virtue of stillness.

While not many doctors will prescribe “stillness” as a medicine, it isn’t difficult to recognize that stillness is the counter-formula to the world’s dizzying pace.

During the Tang Dynasty, poetry was interwoven throughout society. Scholars were required to read and recite it. Poems covered subjects such as harmony with nature, friendship, and relationships with oneself and society—even politics.

It is essential however to realize that when Tang poets reference politics, it in no way refers to a system like we have on our Earth today—particularly that of contemporary China.

Tang society was much more virtuous in comparison. For this reason, life under Tang leadership resulted in societal stability and harmony unlike we have today.

Emperor Tang Taizong was known to care deeply for his people, to exude tolerance, and was open to criticism from others. In contemporary China, the opposite is true, as the Communist Party rules through force; and criticism, even when it is constructive, can invite persecution.

Such a government exudes a total disregard for humanity, Earth and the heavens, creating an environment of fear and mistrust among the people—this is a state far, far away from the Tang Dynasty and much in need of a cultural revival.

Modern man is fortunate though, as much of Tang poetry has survived till today—like a precious stone, it has been treasured and passed down from one generation to another.

Hence, in a world desperately in need of peace and stillness, Tang poetry is just like an ornament of pure gold; it reveals its beauty only to those who slow down and take the time to read it.

It is not surprising that two of the most famous Chinese poets were products of the Tang Dynasty. In fact, Li Bai and Du Fu were not just poets, but were also friends.

Li Bai, also known as Li Po, spent much of his life wandering. He is perhaps one of the most famous Chinese wine drinkers of all time. In fact, legend has it that Li Bai drowned while sitting in a boat, drunk, trying to seize the moon’s reflection from the water. According to the Poetry Foundation, “his poetry is known for its clear imagery and conversational tone. His work influenced a number of 20th-century poets, including Ezra Pound and James Wright.”

The sense of peace, simplicity, and nature’s willingness to be a companion are apparent in the first four lines from Drinking Alone with the Moon:

“From a pot of wine among the flowers

I drank alone. There was no one with me—

Till, raising my cup, I asked the bright moon

To bring me my shadow and make us three.”

Du Fu, also known as Tu Fu, was considered to be both a poet and a historian, as he recorded his own life and what he observed around him, including experiences of poverty and war. He was known to adhere strictly to the Confucian ways of life.

While Du Fu and Li Bai were only together for part of their lives, Du Fu expressed a sense of remembrance and true friendship in his first lines of Seeing Li Bai in a Dream II:

“This cloud, that has drifted all day through the sky,

Three nights now I have dreamed of you—

As tender, intimate and real as though I were awake.”

Reading Tang Poetry is refreshing as taking a walk alone in a quiet wood.

What would happen throughout society if reading Tang poems became common practice once again?—if reciting Tang poetry was a daily practice, considered as important a study as economics or medicine.

Furthermore, what kind of transformation would be possible if China’s mainstream placed a high value on studying Tang poetry?

What kind of magic would happen if the China’s leaders spent their free time reading Li Bai and Du Fu?

The article was first published on December 18, 2018