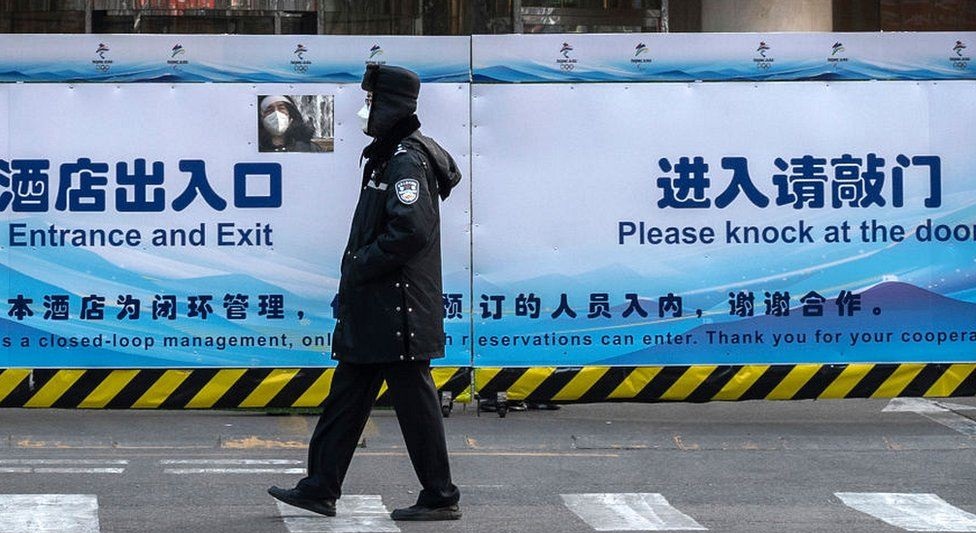 China implemented a “closed loop” strategy to prevent contact with the public. The system began with the travel arrangements for all participants. Rather than being allowed their own choice of travel, all participants arrived in China via charter planes. (Photo:BBC.com)
By Maxwell Shirhall February 6, 2022 12:50 am PST
Facebook
Twitter
SHARE
Facebook
Twitter

Amid the beginning of the 2022 Winter Olympics in Beijing, China faces the largest breach of its borders since the start of the Covid-19 pandemic in 2019. China has been criticized for a lack of transparency and accountability with respect to the origins of the Covid-19 virus in Wuhan and the progression of the virus throughout the country over the last two years. The Communist government has refuted all international speculations and done everything in their power to censor information. Its heavily controlled media and fearful citizens has resulted in nearly no leaks of information as to what exactly is going on within the vast country with nearly 1.5 billion people.

With the Olympic Games on the horizon, growing fear among Chinese citizens to speak out against the government has resulted in a very foggy picture of just what exactly has been going on behind China’s curtain.

The lack of transparency about the coronavirus, a cover up of a female athlete’s sexual assault allegations, acts of genocide upon Muslim minorities and brutal persecution of 100 million of Falun Gong meditators has resulted in a great deal of anger around the world. So much so, that many countries have chosen to “diplomatically” boycott the games. To do so, the participating countries will not be sending official representatives to the Games opening ceremonies, as is tradition.

The Chinese government is facing accusations of forced birth control and sterilization, wrongful imprisonment, detainment of as many as one million Uighurs other minorities in Xinjiang. Despite the accusations made by the Uighur Tribunal and numerous witnesses, China has repeatedly denied the allegations. Regardless of their repeated assurances that there’s no cause for concern, the Chinese government is unwilling to allow an independent international investigation to be conducted in Xinjiang.

The longest running cause of global rage concerning China’s lack of transparency, however, pertains to the coronavirus. Over the past two years, China’s willingness to share their data relating to Covid has been minimal. Many U.S. Congressmen and top doctors from around the world have accused the country of denial, underreporting of cases, destruction of data, and obstruction of international investigations. With the Chinese government making claims of a zero Covid tolerance and staking their legitimacy on their ability to eradicate the virus, China has gone to greater lengths than anywhere else in the world to prevent the spread. Drones have been used to track the public, quarantine centers isolate the infected for several weeks at a time, and the country’s borders have been effectively sealed. They’ve even gone so far as to lockdown entire cities to control the spread, as was seen in Wuhan and Xian. Yet, despite their vast efforts, the country’s failure to exterminate Covid-19 with their zero-Covid-tolerance policy has been exposed by the Olympic Games.

On February 2nd, 55 new covid cases were confirmed among Olympic Games-personnel by the medical expert panel. The 29 cases from new airport arrivals and the 26 that have tested positive from within the “closed loop” China has implemented tallied up to the Winter Games highest single day count so far. Since January 23rd, the 610,000 tests conducted have revealed 287 infections among Games-related personnel.

The chair of the Beijing 2022 medical expert panel, Dr. Brian McCloskey, stated “The numbers are very small” and “We are confident that the system will work. But we are not relaxed. We keep all measures in place.”

China implemented a “closed loop” strategy to prevent contact with the public. The system began with the travel arrangements for all participants. Rather than being allowed their own choice of travel, all participants arrived in China via charter planes. Within their “closed loop” daily testing is conducted, as well as strictly enforced indoor Covid policies.

Despite the systems put in place, the coronavirus continues to defy attempts be contained. Known actions of the past, as well as alleged recent atrocities, have shown the Chinese Communist Party’s desire to alter the world’s perception of them by limiting the flow of information in and out of the country. The demonstrated lack of reliability on China’s reports makes it likely that the number of infections among the athletes and Olympic staff will never truly be known to the public.

The Olympics in China has been known to be used a Communist-control tool. The participants will experience a communist style management of the Olympics, one that has only been emboldened by the pandemic restrictions. The world athletes’ Beijing performance will surely assist to elevate Xi Jinping’s power over the country to greater heights.