When mentioning Austria, people tend to think of the music capital Vienna, or the Alps skiing towns, with beautiful scenery of lakes and mountains. A few music enthusiasts may also think of Salzburg, Mozart’s hometown where the film “The Sound of Music” was shot.

However, a lesser aspect of Austria, one that is loved by the local people, is the Austrian coffee culture. In Austria, Vienna coffee culture (wiener Kaffeekultur) is the most famous, also known as the Vienna Café culture. Vienna’s Cafés are located at the center of the city. In the past 20 years, it has not only been the favorite of local Viennese, but has also been one of the most popular tourist sites from all over the world.

Cafés in Vienna can be traced back to more than 300 years ago. The Viennese said they seized the remaining coffee beans when the Turkish failed to lay siege to Vienna in 1683. But in fact, it was a spy that worked at the palace who opened the first café in Vienna in 1685.

In 1683, Turkey attacked Vienna a second time. Austrian Emperor Leopold I and the King of Poland Augustus II signed a military alliance. The Austrian and Polish coalition forces smashed the Turkish attack. The Turkish army fled and left on the battlefield, around the walls of Vienna, large amounts of weapons and ammunition, along with hundreds of large pockets filled with mysterious brown beans. The Viennese did not know what to do with these little beans. A polish spy who infiltrated into Turkish once tasted black drink boiled from these beans in the city of Constantinople. The Turkish called it “Kahve,” which is now called coffee. As a form of remuneration, the Polish (??) got all the coffee seized on the battlefield and opened the first Café in Vienna.

But at the beginning, business at Cafés were not good. Viennese still preferred tea. Later, the businessman changed the formula and added milk to the coffee. The effect was surprisingly good. It was very popular in the 1780s. This was the beginning of “Melange” coffee. It is still one of the most popular coffee drinks in Vienna, with thick cream (Schlagobers) added at 50 cents more. 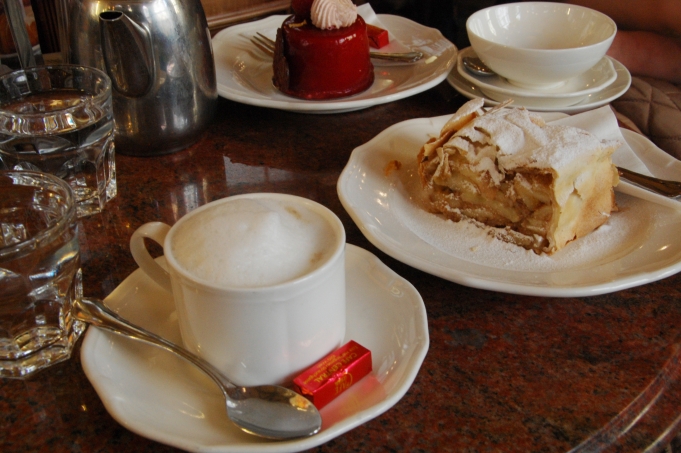 Vienna’s most famous café, Café Central in Vienna’s “Melange” coffee and apple pie, and Mother’s Day cake for Mother’s DayVienna Cafés have their unique coffee culture, with a 300-year-old history that is different from other parts of the world. Cafés provide a warm atmosphere. Dark red plush benches under marble or wooden tables, with mirrors reflecting gentle lights. Decorations in some Cafés are designed to be very luxurious and spectacular, a little worn out in dimmed light, giving the Cafés a most welcoming atmosphere. 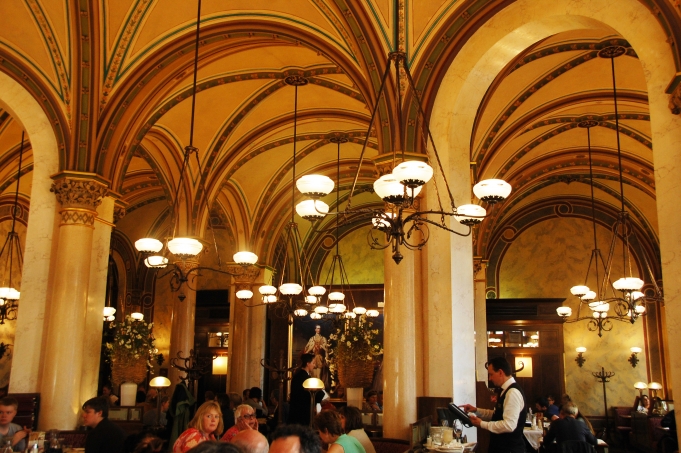 Cafés are also places for tourists far away from home, local people who like to be solitary occasionally or those who gather with friends to chat during weekends. In the past, famous poets, playwrights, artists, musicians and diplomats met at Cafés. Some say that Cafés served as the cradles of many Austrian poems, scripts and novels. It might be an exaggerations, but music masters Mozart, Beethoven, Schubert, and “Strauss Dynasty” all visited Cafés regularly and wrote their work there.

Some writers around 1900 were named as Café writers. They not only exchanged experiences in Cafés, but also completed their work there. One of them was Peter Altenberg. He even wrote on his business card Cafés that he frequently visited. His memorial sculpture is still in the most famouse café, Vienna Central Café.

Many Cafés in Vienna keep their original character. Staff members wear neat black suits and chefs wear white hats. Waitresses walk to each table with hand-made baked goods. Pastries are all made by fresh by the chefs and are still warm from the oven when served. There are a wide variety of items, with the most famous being apple pie and sachertorte.

No matter what kind of coffee you order, you will get a glass of water at the same time and a small piece of chocolate, probably to ease the strong coffee taste. Austrians take a few sips of coffee and a few sips of water. Vienna has good water, which is why coffee here taste mellow and sweet, different from anywhere in the world.

People who visit Cafés need to dress neatly. This is a tradition among the Austrian locals. Every big city has Cafés of over one hundred years of history. Furniture in cafés are also antiques, with special colors, special materials and noble atmosphere. Some cafés have oil paintings of the founder and local landscape, while some have pianos, and invite various artists to play.

At the Cafés there are also newspapers, pictorials and magazines to read. This has remained a major cultural characteristic of Cafés in Vienna for nearly a hundred years. Guests sitting in an old café, eating breakfast, reading the newspaper, talking in low volume, hearing sounds of coffee cups touching coffee plates; this scene has continued for over one hundred years.