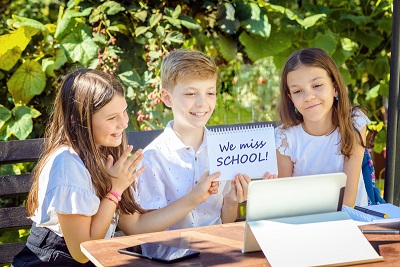 The pandemic that has unleashed COVID 19 to the world has not only had a significant impact on physical health but most damagingly to people’s mental health.

Social distancing, confinement by countries and communities have nothing to do with the life we are accustomed to.

That man is a social being by nature, was already said by the philosopher Aristotle more than three centuries before the birth of Christ, and that a pandemic has never been fought by isolating people, can be discovered only by taking a few minutes to read history.

However, around the world the subject of “back to schools” generates constant debate.

Children and adolescents have undoubtedly been the most affected in all this new world.

The price of school closures (which at the height of the lockdowns due to the pandemic affected 90% of students worldwide and deprived more than a third of children of legal age from access to education) has been devastating.

According to a report by UNICEF, the number of children out of school is projected to increase by 24 million, a level that has not been recorded in human history.

Children’s ability to read, write, and perform basic math facts has deteriorated, and the skills they need to get ahead in the 21st century economy have diminished.

In the words of the executive director of UNICEF, Henrietta Fore, “children cannot afford another year without school.”

The report is very interesting and worrying. You can find the specific data in the following link https://www.unicef.org/press-releases/children-cannot-afford-another-year-school-disruption

Undoubtedly, we are all concerned about the education of our children, but it is not only about math and biology. The government-driven social distancing that the closing of schools has produced and continues to produce creates generational defects that go much further.

Confinement causes difficult resolution situations in children and adolescents that increase frustration and alter emotions. All of this can lead to high levels of anxiety.

What are the symptoms to take into account to know if our children are going through high anxiety processes?

On the other hand, their bodies have also been hit hard by distance education. Evidence suggests that when children are out of school, they are physically less active.

Children also spend much more time in front of the computer screen, the console or the television, they follow irregular sleep patterns, and they tend to eat less favorable diets to their health. This can lead to weight gain and even a loss of cardiorespiratory capacity.

These negative health effects can be even worse if children are confined to their homes without being able to carry out any type of outdoor activity or interact with friends of their same age. Not to mention the adolescents for whom their reference group is fundamental, it is the one that forms them and gives them identity at such a complicated age.

If we refer to countries with high levels of poverty, the issue is even more complex.

A large number of the school population attends school not only for education but rather for a plate of food, which is often the only one they have for the day.

The closure of schools has contributed to increasing hunger, poverty and homelessness rates. And we cannot talk about education if we do not have a good diet, because it is proven that our brain does not perform or respond in the same way without proper nutrition.

What if we think of those children who live in conditions of abuse and violence? Do we really believe that sending them home by closing schools is protecting them? The school is the place where we usually become aware of these situations that activate social workers to be able to help those who are victims.

In my country, Argentina, the first thing to open were the Casinos, then soccer, bars, restaurants and tourist sites, but it is still debated whether children can go back to school or not. It seems there are protocols for everything to make money except education.

It occurs to me that in this case and in many others, it is a country pattern. In poor countries it is better to have an illiterate population that does not think than one that questions decisions.

The reality is that the opening of schools is still being debated by politicians and leaders throughout the world.

We can work, we can travel, we can sell, and we can buy. In one word, we can make money. But the obstacles are endless when we try to talk about EDUCATION.