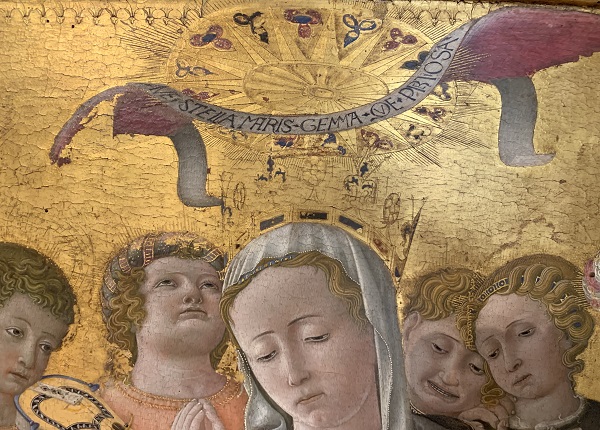 Domenico di Bartolo (c. 1400/1404 – 1445/1447) was an Italian painter of the Sienese School. He was born in Asciano. According to Vasari, he was a nephew of Taddeo di Bartolo. He was born in Asciano. In the early 1400s, the Sienese artist most influenced by the new Florentine style of painting was Domenico di Bartolo. He was, in fact, the only Sienese painter of his day to receive commissions from Florentine clients. Domenico di Bartolo was employed by Vecchietta in the masterpiece fresco The Care of the Sick in the Pellegrinaio (Pilgrim’s Hall) of the Ospedale di Santa Maria della Scala in Siena. It portrays wealthy donors visiting the hospital to men washing the ill, and a fatty friar hearing confession.

He painted one of the most beautiful panels of the Early Renaissance, the Madonna dell’ Umiltà. It is signed and dated 1433 and is one of the earliest truly Masaccesque paintings for which we have a firm date. Domenico di Bartolo must have had some important experiences in Florence in the 1420s, because his Virgin of Humility of 1433 reveals close connections with the art of Donatello, Masaccio, Luca della Robbia, and Filippo Lippi.

Domenico di Bartolo’s major surviving achievement is his participation in a series of frescoes in the Pellegrinaio, the hall for pilgrims at Siena’s Hospital of Santa Maria della Scala. The Frescoes have unusual secular subjects, which deal with the charitable, civic, and medical activities of the hospital. The Gothic vaulting of the room determined the arched openings. The settings are sometimes the rooms of the hospital itself. In their naturalism and their wealth of imagery drawn from contemporary life, these frescoes provide remarkable insight into Sienese activities.

In 1434, Domenico di Bartolo also painted a fresco panel of Emperor Sigismund Enthroned for the Siena Cathedral. He was the tutor of Piero della Francesca. Domenico died in Siena around 1445. 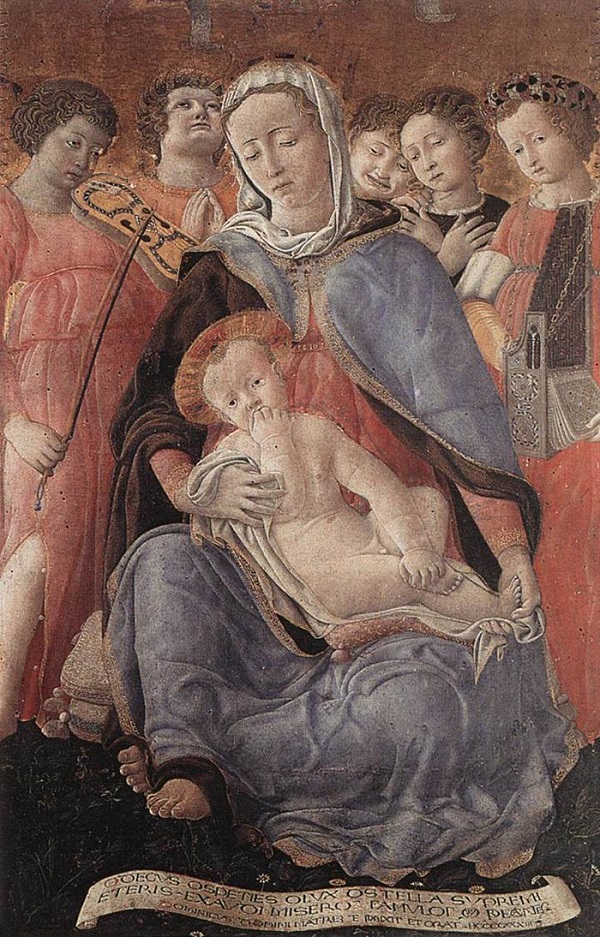 The impact of Masaccio’s new vision had a limited impact on Siena, since for the most part, Siena maintained a distinct stylistic tradition of its own. A Sienese artist who does seem to have been affected by Masaccio, perhaps mediated by the art of Filippo Lippi, is Domenico di Bartolo. His art is exemplified by this signed and dated work of 1433, which contains passages of trompe l’oeil including the banderole with writing on it. The grouping of the figures and the roundness of the faces, particularly the one of the angel who tilts his head sharply, are reminiscent of Filippo Lippi’s painting in Empoli.

Like the paintings of Fra Filippo Lippi of apparently the same years, the coherent and rational light of Masaccio is not full understood, but the massive figures and an interest in robust bodily proportions and in the nude provide a strong link to Masaccio. The motive of the Child sucking his fingers occurs in Masaccio’s Pisa Altarpiece.

Madonna of humility refers to artistic portrayals of the Virgin Mary which depict her as a Madonna sitting on the ground, or sitting upon a low cushion. She may be holding the Child Jesus in her lap.

The term Virgin of humility is also used to refer to this style of depiction.

Domenico di Bartolo’s Madonna of humility, painted in 1433, was described by art historian Andrew Ladis as one of the most innovative devotional images from the early Renaissance.

The formal symmetry of the strips below her feet and those hovering above her express the symbolic duality of her nature: an earthly woman, as well as a heavenly queen.

Despite the low seating position, the star and the gems as well as the halo signify her regal status. In this painting, which is at the Pinoteca Nazionale in Siena, Domenico does not use cast shadows as he does in other works such as the Madonna Enthroned.

Domenico di Bartolo’s fame is tied to the fresco cycle in the Pellegrinaio (pilgrims’ ward) of the hospital of Santa Maria della Scala in Siena (1440-1444), where he recounts the history and life of the hospital in an artistic language that ranges from International Gothic overtones to compositions showing a Flemish realism.

Many great Sienese artists worked for Santa Maria della Scala at some time, making it the city’s third important centre of art, together with the Duomo (cathedral) and the Palazzo Pubblico (Town Hall).

But the most prestigious example of Sienese art in the Santa Maria della Scala complex, is the Pellegrinaio ward or ‘pilgrims’ hospice’, built in the second half of the 14th century and decorated almost a century later with an important fresco cycle devoted to the history of the hospital. Artistic Treasures include a famous fresco cycle (now lost) with Histories of the Virgin, on the façade, by Simone Martini, Ambrogio and Pietro Lorenzetti (1335); the series of frescoes with the Stories of the Hospital in the Pellegrinaio Hall, by Domenico di Bartolo and Lorenzo Vecchietta.

Domenico di Bartolo’s frescoes have unusual secular subjects, which deal with the charitable, civic, and medical activities of the hospital. The Gothic vaulting of the room determined the arched openings. The settings are sometimes the rooms of the hospital itself. In their naturalism and their wealth of imagery drawn from contemporary life, these frescoes provide remarkable insight into Sienese activities.

In the six bays of the hall, two frescoes on the east wall (The Enlargement of the Hospital; Extension of Privileges by Celestine III), and four on the north wall (Feeding of the Poor; Raising and Marrying of Orphans; Reception of Pilgrims and Distribution of Alms; Caring for the Sick) were executed by Domenico di Bartolo.

In the Care of the Sick Domenico combines specific portraiture with a sensitive treatment of the nude figure. The unidealized bodies of the sick man being placed in bed and the wounded man being washed rank among the most naturalistic figures in Quattrocento painting.