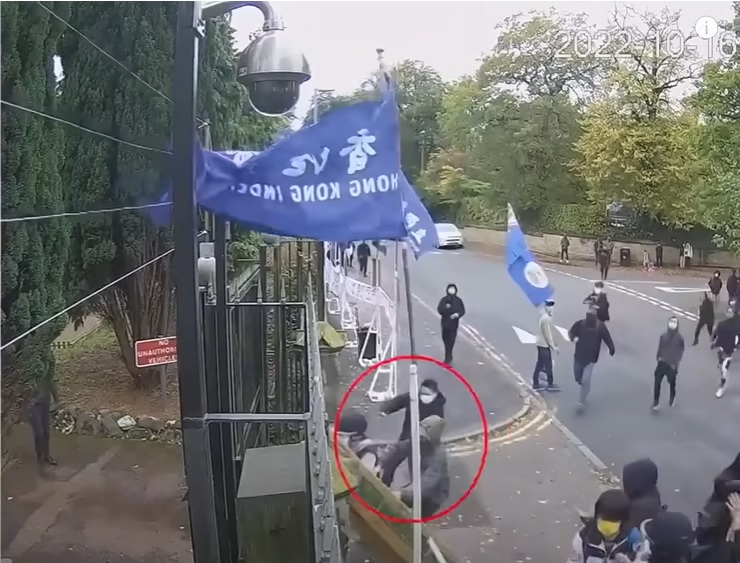 Amid all these diversions, another talking point for the British government arose when a group from the Chinese embassy in Manchester assaulted pro-democracy protestors from Hong Kong.

A Hong Kong pro-democracy group protested the Chinese Communist Party in front of the Chinese embassy in Manchester. Some of the protestors carried banners that made fun of Chinese President Xi Jinping.

A group of men exited the Chinese embassy after the demonstration. Some were wearing protective helmets and jackets. They began to remove the signs. The demonstration was followed by a large brawl.

One of the demonstrators was pulled inside the consulate by a member of the group and was hospitalized for the night. The captured footage shows one of the attackers assaulting the protester.

The police were then able to intervene and pull the individual outside the embassy into the street.

The day after the incident, the chair of the Foreign Affairs Select Committee, Alicia Kearns, invoked parliamentary privilege to accuse the Consul General of being a member of the attacking gang.

In her speech to the legislature, she stated:

“We cannot allow the CCP to import their beating of protestors, their silencing of free speech, and their  failure to allow time and time again protests on British soil.”

MPs are pressuring the British government to dismiss the Consul General if he is implicated in the demonstration.

When former British fighter pilots are offered lucrative private contracts by China to teach their pilots, the relationship between China and the United Kingdom seems to be somewhat fragile. The British government is attempting to amend the legislation to prevent the sale of British and NATO methods to China.

In response to the United Kingdom’s criticism, the Chinese Foreign Ministry Spokesperson said that the diplomats were only carrying out their duties.

After spending the night in the hospital after the event, Hong Kong protestor Bob Chan taped a statement saying he was taken inside the Chinese Consulate in Manchester and assaulted and kicked.

“I could not hold on for long and was eventually pulled into the grounds of the consulate. It was then my hair was pulled and I felt punches and kicks from several, several men.”

“I am hurt physically and mentally. I now have bruises on my eye, my head, my neck, and all over my back. Let me say again, so it is clear, I was dropped into the consulate. I did not attempt to enter the consulate.”

The spokesman Wang Wenbin delivered a robust reaction to the event and stressed that the Chinese government would not show any tolerance for such methods. He stated that they are optimistic that the UK will take steps to defend their consulate.

Politicians in the United Kingdom have condemned the apparent use of violence against demonstrators. During a media briefing, British Conservative MP Ian Duncan Smith stated:

“The government must say categorically, anybody involved in those scenes is not welcome here. If it’s the Consul themselves, they must go.”

He said the government must contact the ambassador and demand an apology in full, adding that such acts should never be tolerated on British soil.