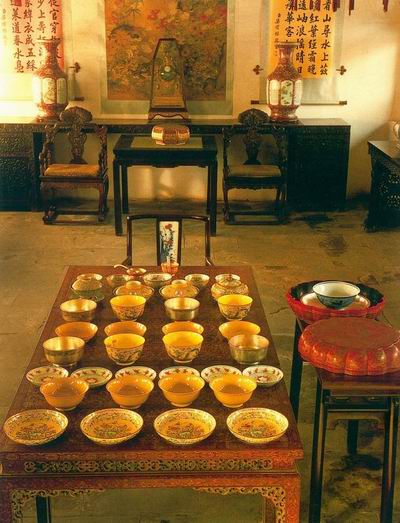 As a ruler of his empire, an emperor wore dragon robes, lived in golden palaces, and rode in carriages. Of course, an emperor’s daily diet must be delicate. How did an emperor have a meal? Was it like a meal in an ordinary family where all the members, young and old together, sat together at a dining table? What’s the Feast of Complete Manchu-Han Courses look like?

According to some old records, emperors of the Ming and Qing dynasties didn’t always have three meals a day. Some would have more than three meals, while some preferred to have fewer. For example, a Qing emperor usually had two meals a day, that is, breakfast and dinner.

When an emperor was enjoying his meal, besides eunuchs, there were others present, like the emperor’s favorite courtiers or sons, waiting for the emperor to grant them a plate of food. Feeling generous or mostly unable to finish a dish, the emperor would award a courtier the delicacy. Those who were granted the delicacy were supposed to stand at another table to consume it. Since the food was awarded by the emperor, one had to finish it and “marvel at its great favor” even if they were not hungry or fond of it.

The following lavish imperial cuisine was mentioned by Puyi, who was the last emperor of China, in his autobiography, from Emperor to Citizen.

There was terminology for the imperial diet. A meal was referred to as “shan,” eating a meal was “jin shan,” serving the dishes was “chuan shan,” and the kitchen was the “imperial kitchen.” Mealtimes were not fixed, totally at the behest of the emperor. As I said, “Serve the dishes,” the eunuch beside me would echo, “Serve the dishes,” to the eunuchs outside the front hall of The Hall of Mental Cultivation. Then the order would be repeated to the eunuchs outside the gate to The Hall of Mind Cultivation, who in turn passed it on to those in the imperial kitchen. As the echo was still lingering in the air, a line of attendants had walked out of the imperial kitchen. Dozens of neatly-dressed eunuchs were seen to carry seven dining tables and hold dozens of red lacquer boxes with the design of golden dragons, heading with great vigor toward the The Hall of Mind Cultivation. As the dishes were carried to the front hall, the eunuchs wearing sleeve protectors would take and put them at the rear hall of The Hall of Mind Cultivation. Usually there were two tables of dishes, while in winter there would be another table of hot pots, in addition to a table of various desserts, rice, congee and a small table of pickles.

A display of imperial luxury was a display of grand dishes. The standard imperial diet during the Qing Dynasty consisted of 120 dishes every meal on three big tables. Besides that, there were staple foods, desserts, and fruits. Later some emperors found it too extravagant and reduced 120 dishes to 64 dishes. During the Xianfeng Emperor’s reign (1850-1861), the number of dishes was reduced to 32. After the death of Xianfeng, Empress Xiao, a consort of the Xianfeng Emperor, tended to state affairs behind the bamboo curtain and further reduced the number of dishes to 24. After the death of Empress Xiao, Empress Dowager Cixi had dominant control over the late Qing Dynasty and re-started the display of imperial luxury by having over 100 dishes for a meal, which was estimated to cost at least 200 taels of silver.

Imperial luxury was still displayed in other ways. That is, on the edge of each plate were the names of the dish and its chef. This way, the quality of the dish could be guaranteed, and it was made easier to trace the origin of any food-related issues, like food poisoning. This method is also applied in high-end restaurants. Maybe it was inspired by the imperial court.

Imperial tableware has a dainty design, mostly made of gold and silver. Even ceramic dinnerware is of the highest quality. Of all dinnerware, gold bowls, plates and dishes best manifest imperial luxury. That’s why “gold bowls” are imperial favorites.

The Shunzhi Emperor (March 15, 1638 – February 5, 1661), the third emperor of the Qing dynasty from 1644 to 1661, deposed his consort Empress Xiao Huizhang for her living a life of absolute luxury. “When dining, she’d be fuming if one item of tableware was not made of gold.”

Apart from gold, a large proportion of tableware is made of silver. According to Imperial Kitchen Catalog of Gold, Silver and Jade Tableware, the recorded tableware on November 3, 1756 was as follows:

From the above list, we can see that most of the tableware is made of silver. For the imperial family, gold is to display luxury and elegance, while silver tableware has many practical functions.

Through the history, some emperors were died of food poisoning. The following is recorded in The Zizhi Tongjian (Comprehensive Mirror in Aid of Governance): Emperor Hui of Jin (259-307), Sima Zhong, “was poisoned after eating cookies, and died at the Xianyang Palace at noon.” Therefore, to guarantee food safety, two methods were applied. One was to have someone, usually a eunuch, taste the food before the emperor ate it. If the food was poisonous, the emperor could prevent himself from being poisoned. Furthemorer, the commonly used tool for detecting poison was made of silver.

In the past, a silver mark was attached to a utensil that contained food. When taking off the cover, a eunuch would put the silver mark into the soup to detect poison in the presence of the emperor. Puyi, the last emperor of China, confirmed, “A silver mark is attached to each plate or bowl, for the purpose of detecting poison.”

It is because if there is poison, a silver mark will turn black. It is scientifically proven that this method is the most simple and effective, since silver will be converted into black silver sulfide when it comes into contact with sulfide. In the past, frequently used poisons, like arsenic, often contained sulfide, so a silver device could effectively detect poison.