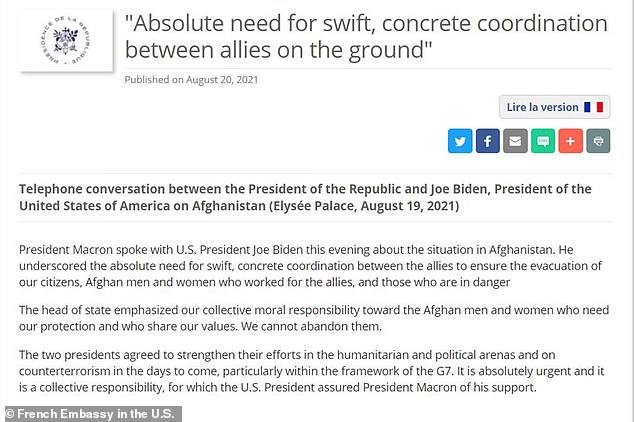 After the Taliban entered Kabul, the Afghan capital, on August 15th, 2021, the Afghan military has shown that they are no longer capable of stopping the Taliban’s advance alone. Because of Kabul’s access to Hamid Karzai International Airport, one of the key airfields connecting Afghanistan and other countries not under Taliban control, Western countries, such as the United States, United Kingdom, Germany, etc., have all dispatched troops to the airport to evacuate their citizens.

Tens of thousands of Afghan people without appropriate paperwork or clearance have congregated at the airport, hoping to get a seat on a plane before the deadline of the Western troops’ deployment.

The US military, the most influential Western force in Afghanistan, has a daily evacuation capacity of 9,000 people, yet, the evacuation has met with its capacity.

Other Western countries, such as Germany, have all participated in the evacuation, but their daily evacuation capacities are much lower than that of the United States military.

On August 20th, the French government released a telephone conversation readout between French President Emmanuel Macron and US President Joe Biden. In the French version of the readout, Macron said that evacuating the Afghan people is a “moral responsibility,” and “we cannot abandon them.”

But, in the White House version of the conversation readout, Macron’s main plea is left out. A brief description provided by the White House for the conversation also fails to include a part of plea, saying only “they lauded the tireless efforts of their personnel working closely together in Kabul on the evacuation of their citizens, the brave Afghans who have stood by us and our NATO partners, and other vulnerable Afghan nationals.”

“They underscored the importance of continued close coordination among allies and democratic partners in Afghanistan, including through multilateral fora, on the provision of humanitarian assistance and support for refugees. They welcomed the virtual G7 meeting next week to help coordinate these efforts and discuss a common approach.”

President Macron’s plea is reflected by how there are still countless Afghans stranded in Kabul, which, besides the airport, is mostly under the Taliban’s control. The 6,000 US troops currently stationed at Kabul international airport are the deciding force that keep the Taliban outside the airport. Other foreign troops, such as the 900 British troops, are not able to maintain the airport safety without the US troops. From this data, it is not difficult to infer that President Macros is pleading to President Biden to deploy more troops to Kabul. This plea for further military support is, according to The Guardian.

Amid the worsening situation, “no nation will be able to get everyone out,” admitted Ben Wallace, the Defense Secretary of the United Kingdom, according to Daily Mail.

One spark of hope is that both the US and UK have planned to set up evacuation centers (the US uses air bases while the British call their centers “processing hubs,” according to Wallace) in nearby countries such as Pakistan, Turkey, Qatar, Bahrain, etc., where Afghan refugees will be then flown to Europe or America.

The drawback of the US and UK’s plan is that the Afghan public seeking safety have to escape from Taliban and enter the nearby countries on their own. This is becoming difficult as Taliban fighters have occupied many sections of the Afghan border.

This could be viewed as an indirect response to the need for further evacuation capacity, the Secretary of Defense Lloyd Austin has activated the Civil Reserve Air Fleet (CRAF), a rarely-used plan that mobilizes civilian aircraft to aid in military evacuations, according to the Pentagon. The CRAF has only been activated twice before: during the Gulf War and the Iraq War.

As of August 22nd, eighteen civilian aircraft from airlines such as American Airlines, United Airlines, Delta Air Lines, etc., have been mobilized. Different from the military cargo planes that land directly in Kabul, these civilian aircraft will, as of now, not enter Kabul and are only used in transporting Afghan people from US bases near Afghanistan to the US or other locations around the world.

President Biden has not yet changed the August 31st deadline of complete US withdrawal from Afghanistan.