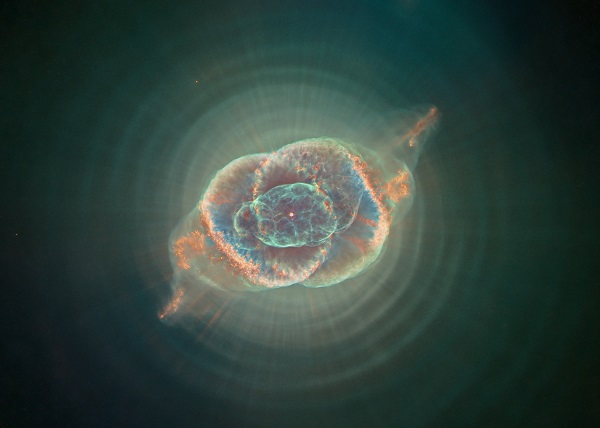 In the Universe everything has life, and the Universe itself is a great living being that observes within itself.

Two images of the alluring Cat’s Eye Nebula lies 3,000 light-years from Earth. The Cat’s Eye (NGC 6543) represents a brief, yet glorious, phase in the life of a sun-like star. This nebula’s dying central star may have produced the simple, outer pattern of dusty concentric shells by shrugging off outer layers in a series of regular convulsions. (Source: NASA)

The Helix Nebula (NGC 7293) obtained from Spitzer Space Telescope , which is a mere 700 light-years away in the constellation Aquarius. The two light-year diameter shroud of dust and gas around a central white dwarf has long been considered an excellent example of a planetary nebula, representing the final stages in the evolution of a sun-like star. (Source: NASA)

The Ring Nebula, as shown in this image. The outer shell of this planetary nebula looks surprisingly similar to the delicate petals of a camellia blossom. (A planetary nebula is a shell of material ejected from a dying star.) Located about 2,000 light years from Earth in the constellation Lyra, the Ring Nebula is also known as Messier Object 57 and NGC 6720. It is one of the best examples of a planetary nebula and a favorite target of amateur astronomers. (Source: NASA)

The planetary nebula IC 418, In this classic Hubble image, glows like a multifaceted jewel with enigmatic patterns. IC 418 lies about 2,000 light-years from Earth in the direction of the constellation Lepus. (Source: NASA)

The planetary nebula known as ESO 456-67, in the imagen, with set against a backdrop of bright stars, the rust-colored object lies in the constellation of Sagittarius (The Archer), in the southern sky. (Source: NASA)

The Hourglass Nebula (MyCn-18), is a tenuous cloud of gas formed by a Sun-like star undergoing ‘death tremors’ at the end of its life. The star had difficulty in getting enough fuel to keep up its nuclear furnace, and has now shed off some of its surface material in two directions. This nebula is some 8000 light-years away and was photographed by the joint NASA-ESA Hubble Space Telescope. (Source: ESA)