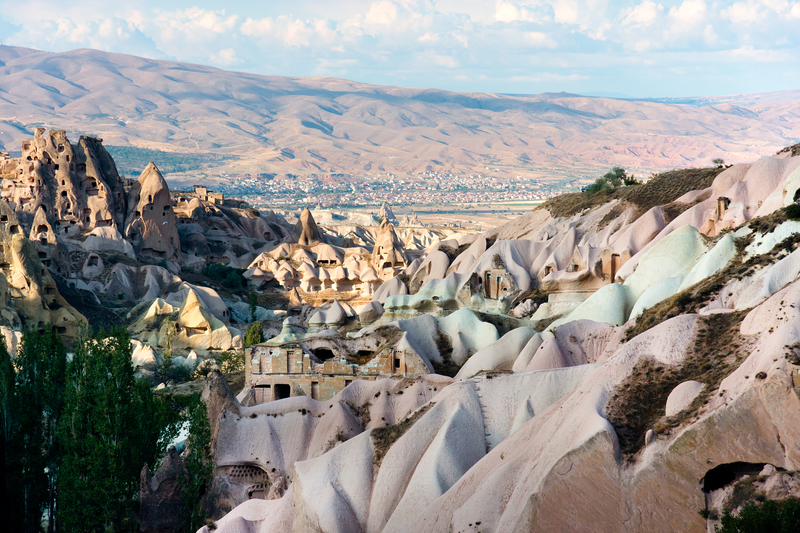 Welcome to the “fairy chimneys” of Cappadocia, Turkey. The beautiful sunset here casts its blue and pink light over the fantastical towers making one feel as if they are in the land of the fairies. These “fairy chimneys” were formed by volcanic ash compacted over millions of years. Cappadocia is an ancient area in Turkey, historically known as Anatolia.  They are comprised of 40 underground cities, of which six are currently open.

Innumerable groups of people have lived in the Cappadocia area over thousands of years. Records from the 19th century BCE attest to the existence of an Assyrian merchant colony that dwelled in the city of Kanesh located in Cappadocia.  Trading networks of the Old World which ran through Cappadocia included the Grand Trunk Road of India and the Incense Road of Arabia, which functioned during the times of Ancient Mesopotamia.

These major trade routes have run through Cappadocia for thousands of years. Villages in Cappadocia served as trading posts for merchants traveling to far off lands. These well-known routes made it easy for marauding attackers to plunder the villages and the merchants traveling them. Because of this, villagers endured never-ending wars, which threatened to wipe them out. To escape the raiders, villagers dug through the porous ground beneath them to create vast underground tunnels.

Villagers brought everything they needed to live underground, including their animals, food, and belongings. They dug rooms for food warehouses, housing, sanitation, wine and pottery production, and places of worship. Streams were diverted to underground wells for drinking water and to hydrate their livestock. Giant millstones were rolled across sections of tunnels to keep attackers out and, then conversely, used to trap attackers in other areas. As the population grew, more tunnels were dug, eventually creating eight levels of tunnels and rooms. The lowest of these tunnels are over 200 feet below ground.  These tunnels slowed down attackers so that only one man at a time could fit through them, making the tunnels easily defended by only a few men.

The repeated attacks over the centuries led to successive groups of people devising better and more ingenious methods of defense. Villages became cities, as did their respective underground cities. The cities connected underground to form the largest network of underground fortresses in the world, over 100 miles wide.

Successive civilizations used these tunnels to retreat into whenever they were threatened by outside intruders. For example, over 4000 years ago, Hittites escaped there and constructed hidden stashes of weapons and booby traps.  This real-life occurrence recalls images of Indiana Jones in Raiders of the Lost Ark trying to escape the enormous rolling ball and unmanned flights of arrows. In 400 BC, the Ispartan army used these underground cities to successfully hide from the Iranians. The Christians hid there from both the Arabians and the Romans. The Christians, as well as the other cultures, dug churches underground.

There are said to be hundreds of cave churches found in Cappadocia. Hittites, Phyrgians, Persians, Romans, Seljuks, and Ottomans have ruled this area.  These are just a few of the peoples who hid underground over the centuries. With each successive culture, more tunnels were dug deeper and further to fit their needs.

Derinkuyu is the largest and oldest underground city in Cappadocia.  Discovered in 1963, it is said to be 10,000 years old. There is some evidence that Derinkuyu was home to ancient paleolithic tribes 30,000 years ago. Eight levels have been cleared for archeological study and tours. According to Andrew Collins and Hugh Newman, leading experts of this area’s history, Derinkutu has 18 levels underground, with water well shafts going all the way down to its lowest level. These shafts also acted as ventilation shafts.  More shafts were dug horizontally to provide ventilation throughout the underground city. Together, these shafts created good air flow to all the levels. It is believed that 50,000 people lived underground in Derinkuyu at the same time.

Now that your interest in Cappadocia’s ancient fairyland is piqued, book your next vacation!  Besides the innumerable tours available, you can try these unique experiences.

Experience what it was like to live in a cave by renting a home or Airbnb, ensuring an unforgettable stay in the region. Whether it’s a fantasy land you are searching for or a phenomenal adventure into the past, Cappadocia is a must see.  Book your next vacation now. There’s something for everyone.

The Most Popular Underground Cities in Cappadocia – Guided Istanbul Tours May 12,2021