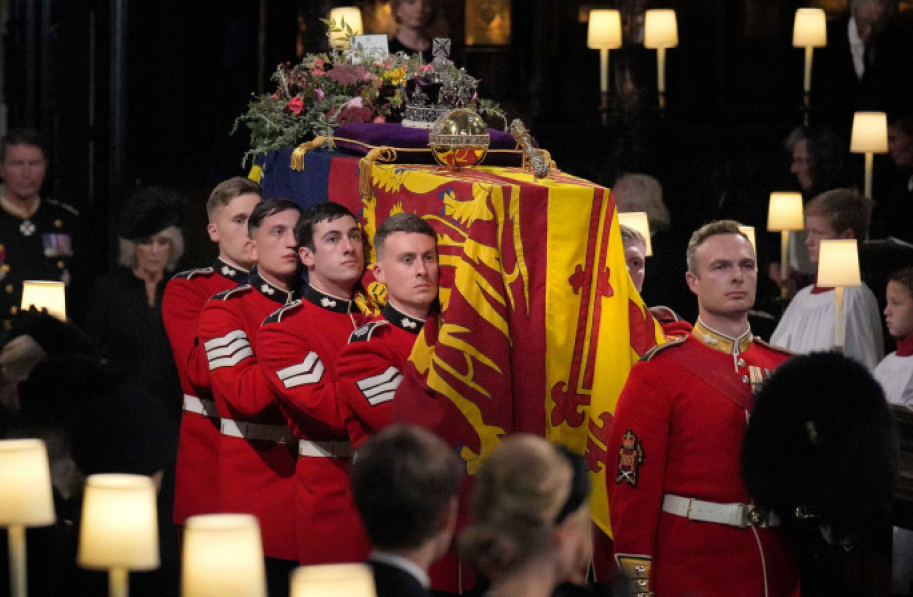 Queen Elizabeth II was laid to rest on Monday, September 19, at King George VI Memorial Chapel within the St George’s Chapel beside her later husband, Prince Phillip. As expected for the former Monarch, a great deal of attention was placed on ensuring the day’s events were impeccably executed, including the aesthetics of Her Majesty’s funeral.

The Imperial State Crown, her orb, and scepter were adorning the royal’s coffin. Embellishments also included carefully curated flowers in gold, pink and deep burgundy—geraniums, garden roses, dahlias, autumnal hydrangea, sedum, and scabious—selected to complement the greenery, all obtained from the gardens of Buckingham Palace and Clarence House in London, as well as, Highgrove House in Gloucestershire.

Florist Gemma Kavanagh says wreaths designed for royal funerals are generally subdued in tone, boasting white and green hues instead of an assortment of colors. She adds, however, that the colors chosen for Queen Elizabeth II were selected to symbolize the Royal Standard Flag.

Her Majesty had always been a lover of English flora and gardens. Hence, each plant held its own special meaning. The rosemary is traditionally seen as a representation of remembrance. The author of The Brief Life of Flowers, Professor Fiona Stafford, says the shrub “is also associated with love and loyalty, and it was used for marriage bouquets or burials, as well for strewing on the dead. So it’s an appropriate one to be part of the wreath.”

Myrtle also symbolizes love along with affection, and beauty, observed as a sign of a happy marital union. The myrtle atop the coffin was taken from a plant in the Monarch’s wedding bouquet in 1947. English oak was also present, a national symbol of strength, wisdom, and endurance, representing the Queen’s unwavering commitment to the throne. Perched on top of the vibrant foliage was a lovely card handwritten by King Charles III. It stated, “In loving and devoted memory, Charles R.”

A more traditional wreath adorned the Queen’s coffin as it journeyed from Balmoral to Westminster Hall in London. It consisted of flowers cut from royal estates, and the wreath comprised phlox, dahlias, white heather, pine fir, and sweat peas. The latter was also included in the funeral wreath for the Duke of Edinburgh, Prince Phillip.

The Queen’s passion for flora was her love for her dogs—two corgis, Muick and Sandy—and her horse, Emma. As the Queen’s hearse arrived at Windsor Castle, Emma, a 24-year-old pony, could be seen looking on, where a flower border lay. As the procession was underway, Emma lifted her leg to acknowledge the late Monarch.

Joining in bidding farewells were Muick and Sandy. The corgis, who were present with their owner the day she passed, stood alongside Prince Andrew and two royal guards outside Windsor Castle as they awaited the arrival of the Queen’s coffin.

The actions of Emma, Muick, and Sandy were one of the main highlights for many in attendance and who viewed the funeral online. Reports are that the corgis will be placed in the care of the Duke of York, Prince Andrew, and the pony is to be taken care of by Prince Andrew’s daughter, Lady Louise.