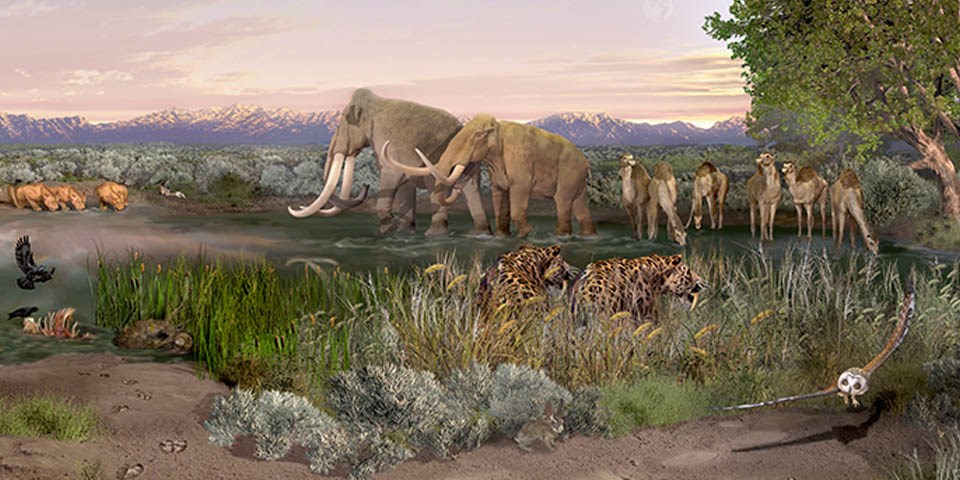 The precise moment humans first walked the lands of North America is still unknown, but archeologists in White Sands, New Mexico, have now uncovered the oldest unambiguous evidence to date. A series of unmistakably human footprints have been found at White Sands National Park, and date to around 21,000 to 23,000 years ago

Before this discovery, the Clovis culture has remained the only sparse evidence of early human civilization in North America. The Clovis culture is a prehistoric PaleoAmerican culture, named for distinct stone tools found near Clovis, New Mexico, in the 1920s and 1930s. Evidence reveals this was around the end of the last glacial period and is characterized by the construction of “Clovis points” and distinctive bone and ivory tools. Archaeologists’ closest determinations, at present, state this radiocarbon age is equal to roughly 13,200 to 12,900 years ago. Clovis people are considered to be the ancestors of most of the indigenous peoples of the Americas. Due to the uncertainty of how these tools arrived at the sites, archaeologists could not be sure that actual homo sapien habitation took place. The presence of the White Sands footprints now solidifies this hypothesis.

Homo sapiens evolved from their early hominid predecessors between 200,000 and 300,000 years ago. The first modern humans began moving outside of Africa starting about 70,000 to 100,000 years ago.
Humans are the only known species to have successfully populated, adapted to, and significantly altered a wide variety of land regions across the world, resulting in profound historical and environmental impacts.

Multiple human footprints are stratigraphically constrained and bracketed by seed layers that yield calibrated radiocarbon ages between 21,000 and 23,000 years ago. These findings confirm the presence of humans in North America during the Last Glacial Maximum, adding evidence to the age of human colonization of the Americas. The new discovery provides a more specific and certain time range concerning the existence of early inhabitants and available Pleistocene megafauna. This also confirms homo sapien presence coincided with a Northern Hemispheric abrupt warming event, Dansgaard-Oeschger event 2, which drew down lake levels and allowed humans and megafauna to walk on newly exposed surfaces. The perfect conditions allowed tracks to be preserved in the geologic record.

“Our dates on the seeds are tightly clustered and maintain stratigraphic order above and below multiple footprint horizons – this was a remarkable outcome,” says Kathleen Springer, a Research Geologist with the Geosciences and Environmental Change Science Center.

That makes the footprints the oldest and clearest evidence of human presence in North America. Some archeological sites have posited that humans were around even earlier through stone tools found in Texas, dated to around 20,000 years ago, and cave art in Mexico as long as 30,000 years ago, but tools, which are often just pointed rocks, are more difficult to prove as evidence of humans. Footprints are a much clearer indication of habitation. The new discovery could actually validate these other discoveries.

“White Sands provides the first unequivocal evidence for human presence in the Americas during the Last Glacial Maximum,” says Dan Odess, Chief of Science and Research for the National Park Service. “Not all archaeological sites contain such unequivocal evidence. One reason why this discovery is important is that it makes the idea that other purportedly ancient sites really are evidence for human presence that much more plausible, even if the evidence they contain is less unequivocal. This doesn’t mean all of those sites are legitimate, but it means they cannot be dismissed out of hand.”

The footprints also provide and interesting insight into the everyday lives of the people of that time. Smaller tracks seem to suggest the presence of many children and teenagers, with few adult traces showing the youth were not completely alone.

“The footprints left at White Sands give a picture of what was taking place, teenagers interacting with younger children and adults,” says Matthew Bennett, lead author of the study. “We can think of our ancestors as quite functional, hunting and surviving, but what we see here is also activity of play, and of different ages coming together. A true insight into these early people.”

Archaeologist Vance Holliday and Department of Geosciences student, Brendan Fenerty, documented basic geologic layering and dating in nearby trenches on the White Sands Missile Range very close to where the tracks were found.

“We were interested in reconstructing the evolution of the landscape in the context of environmental changes and some younger archaeological sites in the area,” Holliday said. “We had no idea what was buried nearby.”

They were also able to find tracks of mammoth, giant ground sloth, dire wolves, and various birds at the White Sands site. The evidence of cohabitation with these species in this location is an exceptional discovery, according to archaeologists.

“It is an important site because all of the trackways we’ve found there show an interaction of humans in the landscape alongside extinct animals, like mammoths and giant sloths,” reported mammalian paleontologist Sally Reynolds of Bournemouth University. “We can see the co-existence between humans and animals on the site as a whole, and by being able to accurately date these footprints, we’re building a greater picture of the landscape.”

The actual human tracks at White Sands were not uncovered by any of the multitude of research students or professors working in the area, but by David Bustos, resources manager at the park.

“It is incredible to have the confirmation on the age of the human prints, and exciting but also sad to know that this is only a small portion of the 80,000 acres where the prints have been revealed bare and are also being rapidly lost to ongoing soil erosion,” Bustos stated.

“Detection and imaging with nondestructive technology has greatly expanded our capacity to study these remarkable footprints in their broader context,” Urban said.

As new techniques and technology continue to appear, so will our understanding of the history of mankind. Being able to look back on the past and explore through time helps to connect us with who we were, who we are, and who we will be.

University Communications and Bournemouth University. “Earliest Evidence of Human Activity Found in the Americas.” A News, The University of Arizona, Sept. 23, 2021, https://news.arizona.edu/story/earliest-evidence-human-activity-found-americas