Home News Inflation the Precursor To The Great Reset? 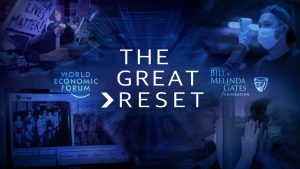 The Great Reset is the name of the 50th annual meeting of the World Economic Forum that was held in June 2020. It brought together high-profile business and political leaders with the theme of rebuilding society and the economy following the COVID-19 pandemic. (WEF)
By Tim Gebhart May 19, 2021 4:40 pm PST
Facebook
Twitter
SHARE
Facebook
Twitter

With the pandemic as the backdrop, World Economic Forum founder Klaus Schwab addressed the international community, stating the impact of COVID was “similar to a world war.” Schwab outlined the recovery effort in his book “COVID-19: The Great Reset.” Of the recovery effort, he stated, “When we look at COVID, we should look at it in three phases. We have three “R’s,” restrain … recover, to go back to a new normal, and finally reset, which means to design and define strategies which should lead us after the Corona phase.”

The reset phase Schwab detailed, seeks to address the climate crisis, engender a more inclusive economy, and push for global governance, as well as vaccine passports as mentioned in their website www.weforum.org.

The reset plan has been raising concerns the World Economic Forum and its members seek to push the Globalist/Marxist agenda in the wake of the COVID pandemic. The Globalists and their figurehead nation, China, occupied by the Chinese Communist Party, have been advocating for, and pushing an international currency akin to the FIAT system operated by the Federal Reserve and Central Bank in the United States.

The Central Bank has printed over 10 trillion dollars since the start of the pandemic, significantly adding to the debt load amongst economies around the world. With higher minimum wages, trillions in infrastructure and stimulus spending enacted and underway, as well as a universal basic income, many are predicting rampant inflation and a freefalling economy. Inflation itself being created to usher in economic disaster which would justify a reset aligning with the Globalist’s aims to consolidate nations and their economies to their aims.

Alternative forms of currency outside of the FIAT and Central Bank system and immune from direct manipulation such as cryptocurrency (Bitcoin, Etherium) are being seen more and more as an asset like gold and silver to hedge against inflation have been targeted and suppressed by the Globalists.

Rising in popularity and value, Bitcoin jumped from $10,000 in May of 2020 to $58,000 in May 2021, surpassing the value of gold, which is currently at $34,000. China recently outright banned investment in cryptocurrency, warning financial and payment institutions from crypto currency business. For many decades, the Chinese Communist Party has also suppressed and artificially kept low the value of gold and silver, deterring investors.

The Great Reset plan pushed by Klaus Schwab, who in 2018 received the China Reform Friendship Medal for “promoting China’s international economic exchanges and cooperation” and the Central Bank system have been exposed to a greater extent by their rapid and damaging manipulation of the international economies. Their attacks on precious metals and crypto currencies, as well as their policies of sabotaging the U.S. economy by hyper spending, tax hikes, and printing mass quantities of currency have raised the alarm for many. Zimbabwe, Venezuela and Argentina, all failed states with collapsed economies run Globalist leaders are predictors of what they have planned for the U.S. They are putting those plans into place by the innocuous Great Reset.