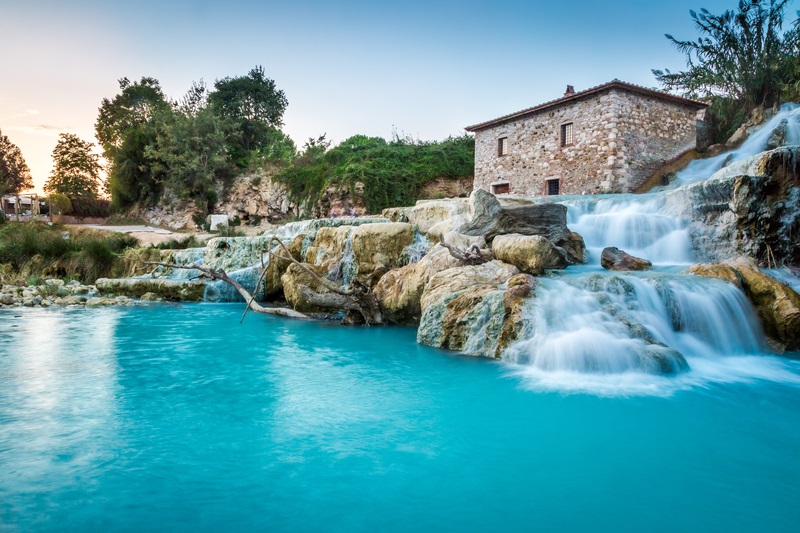 Italy is a country full of charm, architectural and natural beauty. What better way to spend beautiful moments of relaxation than in the best Italian natural hot springs? And we are not talking about expensive spa or thermal centers. Relaxing is a natural right that should not have costs, Italians know. That’s why there are some stunning hot springs, placed from north to south of Italy (Italian islands included) that won’t require any fee, or payment to access. They are pools of thermal water that flows naturally from the earth, real spas accessible to all. The water of these hot springs, in addition to giving you a moment of relaxation, have properties that are good for the skin and help the body.

Where you can find these free corners of well-being? It’s quite simple because there are many spots all along Italy, and included below are the most recommended places.

From north to south Italy you should visit:

The thermal water is the same as the more famous “Borneo Thermal Center” as it flows from the same spring. We are no longer in a wellness center, but immersed in the nature of a forest reachable alongside a walking path, so nature is its main word. All your friends will want to know where you were from the inevitable and inflated photo in costume in the hot tub to a shot with a breathtaking mountain panorama behind you

The city of Saturnia, in Tuscany, is known to be home to one of the best spas in Italy. A story tells that the hot springs in Saturnia, were born from the launch of a lightning strike by Jupiter. Thanks to a missed shot, the Cascate del Mulino (or Cascate del Gorello) were born. Nature, the benefits of thermal water and gratuity have made these waterfalls a popular summer destination for locals and tourists. The area is only home to parking and a makeshift bar; the scene is completely stolen from the thermal baths with an average temperature of 37.5 °. Not even within the time it takes to park that you have already made the first dive!

The name comes from the verb “bollire” which means “to boil”. But the Terme del Bullicame offer much more: a hot water tank and a cold water tank, to satisfy even the Nordic spirits! What do they both have in common? The therapeutic properties of thermal water! The benefits have been known since ancient times, so much that “Dante Alighieri” mentioned the very hot spring of the Bullicame  in the cantica of  “Hell” in the Divine Comedy.

Could not miss the island of Ischia, a popular tourist destination famous for its thermal springs.

Escape from mass tourism and experience the island following the advice of our local guides: they will lead you to the beach of Borgo Ponza, a natural paradise that houses the Terme di Sorgeto. Reaching them won’t be quite easy but we assure you that the prize repays all the effort: to deserve a moment of relaxation you must first walk the 200 steps that separate you from the finish line. Once you arrive at your destination, you can finally let yourself be lulled by the waves of the sea. The thermal water that rises from the seabed can reach a temperature of 90 °; the boil is mitigated by the fresh sea water that gives a pleasant sensation on the skin.

In Sicily, the sea is wonderful, but there are also real open-air spas, those of Vulcano. Sulphurous water baths and mud pools. The benefits for the respiratory system and joints are innumerable. The smell is not the most pleasant because of the beneficial properties of these waters derive from the presence of sulfur. But the results will be so amazing that the fact of the smell won’t bother you.

Attention: the “Terme di Vulcano” are not open during the winter season; they are usually accessible from April until late autumn.

A dip in the thermal water also seems like a journey through time with destination Ancient Rome. We are in Sardinia, in the province of Oristano. In this place, rich in history, flows the Terme di Fordongianus, thermal baths from the warm waters at a temperature of 54 °, coming from the Roman cistern inside the archaeological site. In addition to the benefits of thermal water, you can follow a tourist route made within the complex. You can say that you have been on a cultural trip to Sardinia, in the name of well-being and relaxation!

Take your moment of relax in these mesmerizing hot springs in Italy and you won’t have any regrets.