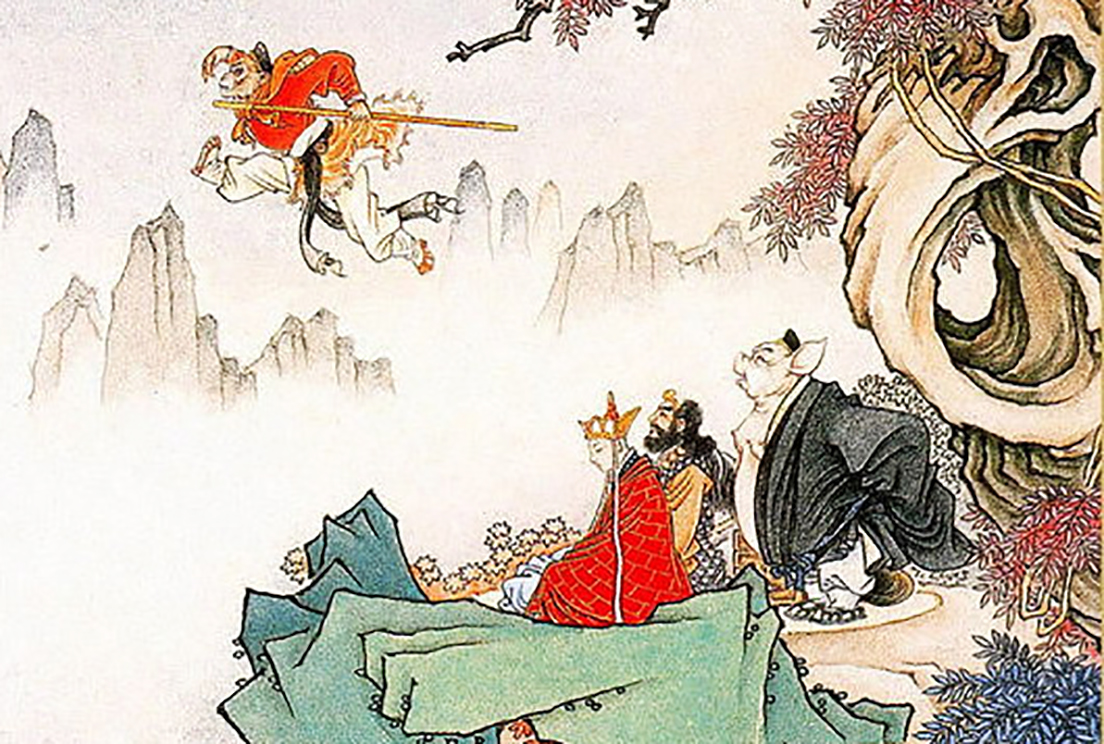 A Monkey with a magical cudgel, a Pigsy with a rake, a friar with the luggage, and a monk riding a white horse; not a team you’d usually expect to see embarking on a holy mission. Yet this exact team and their journey, depicted in the novel Journey to the West, has become the most iconic of ancient Chinese literature.
By Zhihui Zou, Lillian Zheng, Josephine Kingswell July 24, 2021 4:53 am PST
Facebook
Twitter
SHARE
Facebook
Twitter

A Monkey with a magical cudgel, a Pigsy with a rake, a friar with the luggage, and a monk riding a white horse; not a team you’d usually expect to see embarking on a holy mission. Yet this exact team and their journey, depicted in the novel Journey to the West, has become the most iconic of ancient Chinese literature.

The book was first published in 1592 during the Ming Dynasty (1368 to 1644 A.D) by Wu Cheng’en (1500–1582). It tells the tale of a monk called Sanzang, leading his three disciples—Monkey, Pigsy, and Sandy (the friar)—on a quest to the Western Regions (Xiyu), to obtain sacred Buddhist texts. The harsh landscape, and the monsters and malevolent spirits they encounter bring numerous challenges which they must overcome.

The most famous character of the tale is Monkey, or Monkey King; also known by his Chinese name, Sun Wukong. He is a monkey possessing magical powers, such as the ability to shape-shift, cloud-surf, or use superhuman strength. He can see through his Third Eye (True Sight) to distinguish humans from monsters in disguise. Monkey’s golden cudgel, called Ruyi Jingu Bang, can extend, shrink, or be duplicated, however he wishes.

Since its publishing, Journey to the West has been reprinted throughout the centuries. It has also been brought to life through countless folk operas, radio talks, films, and on television. The Chinese pictorial books, Lian Huan Hua have depicted the journey in numerous versions; their popularity leading to billions of copies sweeping through China. Wukong flying through the air on a cloud, holding a yellow and red cudgel is an image reminiscent of childhood for many Chinese, even today.

Journey to the West is much more than a tale of mountainous adventure and the slaying of monsters. It encompasses the virtues of companionship and fundamental human nature; expressed through Wu’s brush, 500 years ago.

One most famous episode is called Sun Wukong Subdues the White Skeleton Demon Three Times. In it, Monk Sanzang and his three disciples encounter an evil spirit, the White Skeleton Demon. She can separate her spirit from her physical body, therefore appearing disguised in another form; much like Wukong’s shape-shifting. The demon’s goal is to consume the flesh of Monk Sanzang in order to gain immortality. 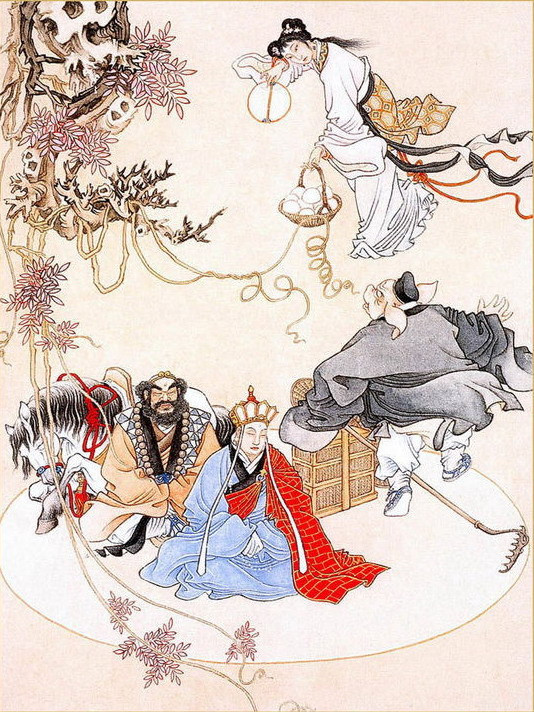 White Skeleton Demon makes her first attempt at capturing Monk Sanzang by appearing in the form of a young woman, trying to lure him away from the protection of his disciples. Yet Wukong sees through her disguise with his True Sight and slays her with his cudgel. The other two disciples, who did not have their Third Eye open, could not see what had truly transpired. Believing that Wukong had killed an innocent beautiful woman, they convinced Monk Sanzang to punish him. The monk puts a spell on Wukong that gives him a serious headache whenever he’s seen to be misbehaving. Thus, the once untamed and impetuous monkey is controlled by the spell. 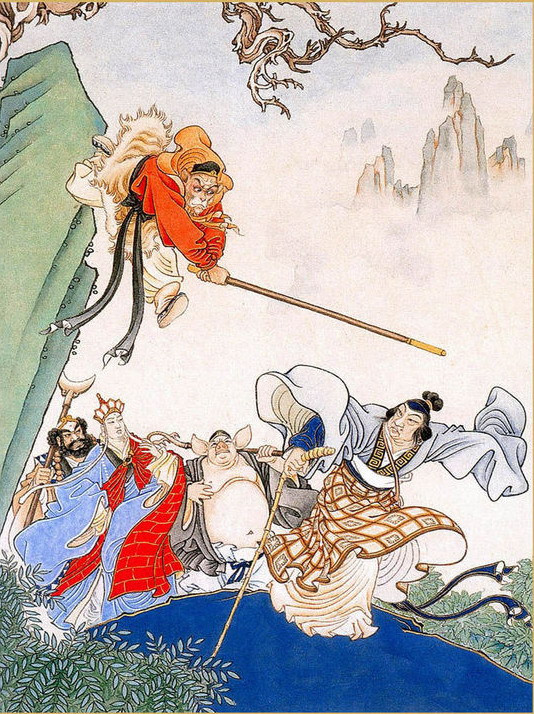 Despite her physical defeat, the spirit of White Skeleton Demon remains alive. On her second attempt, she approaches as an old woman, claiming to be the mother of the young woman seen to be slayed by Wukong. Of course, Wukong sees through her disguise yet again, and slays her on the physical plane once more.

Seeing the old woman’s dead body (abandoned by the demon), Monk Sanzang condemns Wukong a second time. However Wukong manages to explain the true situation to Pigsy and Sandy, who, after all, are not commoners either. They were also heavenly gods prior to being sent down to repay their mistakes by accompanying the monk. Their true sights are lower than Wukong’s. Knowing that Wukong had the ability of high level True Sight, they believed, trusted and helped calm him. 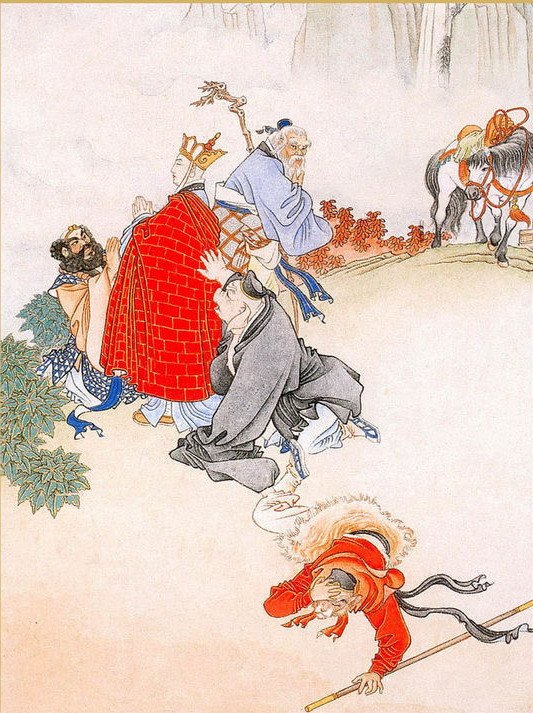 Just as the group manages to pull together and are about to recommence their journey, they encounter the White Skeleton Demon for the third time. This time, the demon, appearing as an old man, claims that Wukong’s group murdered his wife and daughter. Once more, Wukong slays the demon with his cudgel. This time, Monk Sanzang, who remains unconvinced of the presence of an evil spirit, has had enough of the killing. He orders Wukong to leave.

This short yet impactful tale shows the difficulties encountered during teamwork, as it’s unavoidable that each person has their own understanding and knowledge. Despite Wukong being the most knowledgeable due to his ability and high level of True Sight. Although known for his courage and carefreeness throughout the book, it’s easy to picture Wukong’s anxiousness when communication with his companions breaks down.

His task is to protect his master, Monk Sanzang, yet in facing White Skeleton Demon, Wukong has to become the leader, the master, or even the father figure. In facing the dilemma of saving Monk Sanzang or obeying his order, he is deemed helpless and can do nothing to avoid his companions walking into a trap. 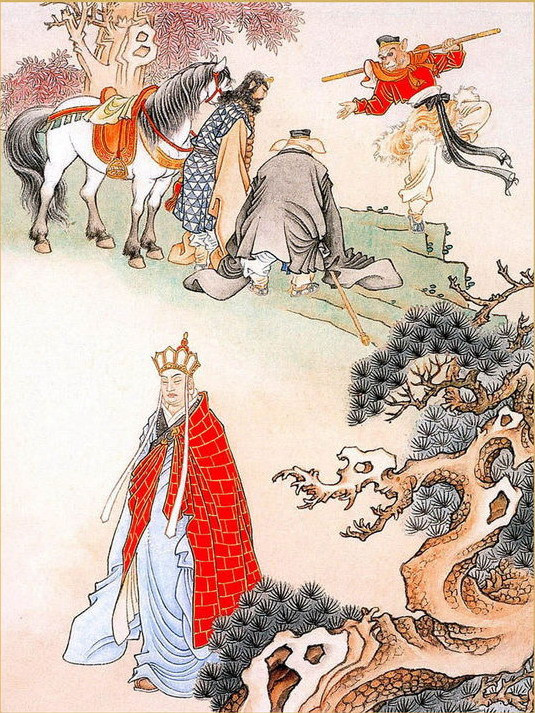 In the end, in tears, Wukong obeys Sanzang’s order and leaves the team; wishing the group well, without anguish or complaint. Seeing the bigger mission of the journey, he puts aside his personal feelings and the urge to argue or prove himself. At the end of episode, Wukong returns to rescue the group from White Skeleton Demon.

Perhaps, it’s this emotional regulation that this episode is trying to show. Although Wu Cheng’en describes Wukong’s inner turmoil, greater attention is paid to the aspect of sacrifice for a greater good. Wukong, in facing the desire to illuminate his teammates with his unique knowledge, had to ground himself in humility, and remember the bigger picture, fuelling no further argument or adding to the downward spiral of the situation. 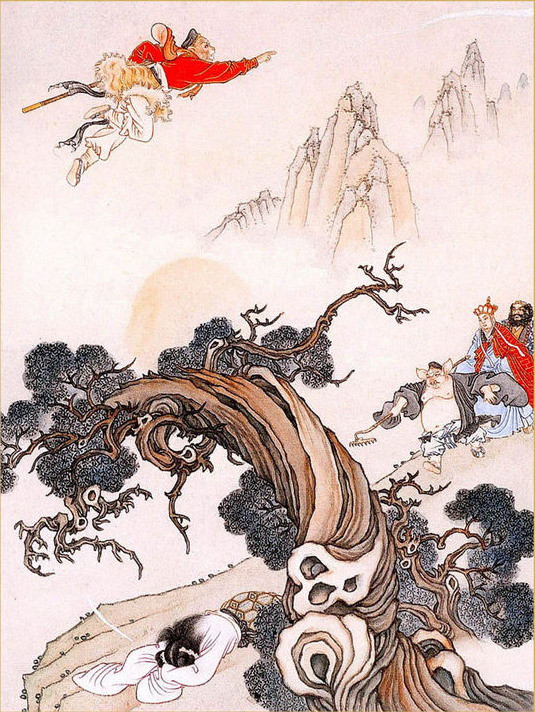 With stories like Journey to the West, it’s often easy to get immersed in the joys of the energetic adventure, and not see beyond, into the deeper lessons. Perhaps each one of us, like Wukong, have experienced challenges when working with others in a group–be it with friends, colleagues, or family. There may be a lot we can learn from his inner struggles, dilemmas, and the thoughts that could not be spoken out loud.

As Wu wrote in another book of his, A Record of the Tripods of Emperor Yu (禹鼎志), “My book does not just deal with the supernatural; it deals with the foibles of men too.”