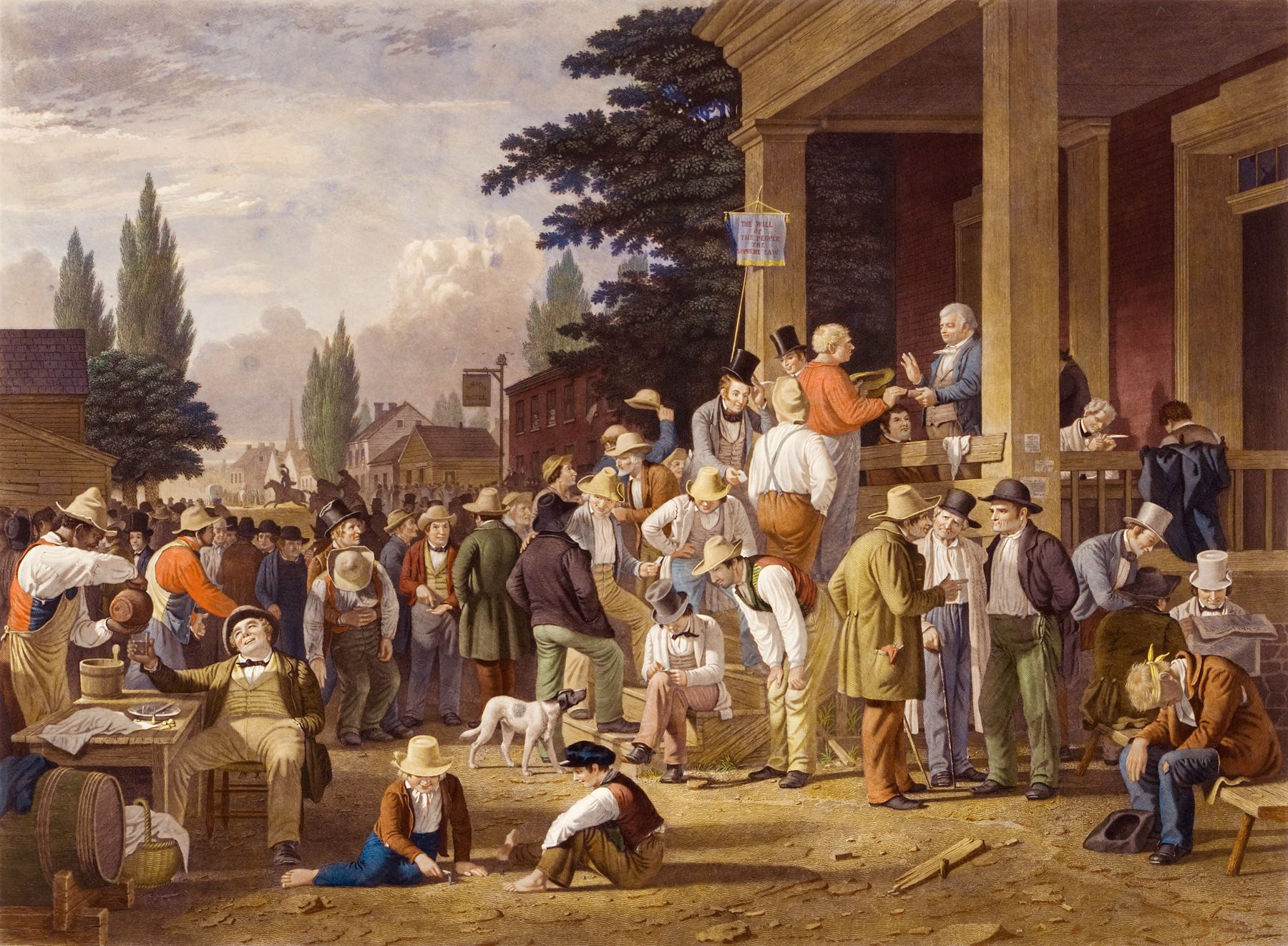 The County Election 1846 by George Caleb Bingham. It depicts the American democratic system in progress. The painting shows a polling judge administering an oath to a voter, surrounded by various worrisome behavior throughout the scene. Bingham has left nothing out, the courtier, the politician, the labourer, the sturdy farmer, the ‘bully’ at the poles [polls], the beerseller, the bruised pugilist, and even the boys playing ‘mumble the peg’ are all distinctly recognized in the group. © Reynolda House Museum of American Art
By Lillian Zheng November 14, 2020 5:09 pm PST
Facebook
Twitter
SHARE
Facebook
Twitter

When we met with Lily’s mother many years ago, she was 92 years old, but still a very talkative, smart and dynamic lady. She was an army secretary who fought for the Nationalist Republic of China during World War II under Chiang Kai-Shek.  Lily’s mother retreated to Taiwan just before Mao Zedong and his communist army took over China in 1949. After Lily’s father passed away, she and her mother moved to the United States several decades ago.

Lily’s mother told my parents that she was applying for U.S. citizenship. In her 90s, what good would being a U.S. citizen do for her? She said “with this citizenship, I can vote for the U.S. President.”

Voting for the U.S. President is a gifted chance for someone like Lily’s mother, as well as many of us and our great ancestors. Unlike other nations that started with Kings or Emperors, America was established through consensus, or votes, the ultimate foundation where people of all backgrounds and views agreed to live alongside with each other.

I am not sure whether Lily’s mother has voted in this 2020 election which had the largest voter turnout in U.S. history with over 148 million people casting their ballot. The sacred right of voting is certainly being practiced across the country by tens of millions of Americans.

On November 4, 2020, while Americans were working hard to determine their next president, the media announced Biden’s win. President Trump, seeking a second term, rocked the world by refusing defeat, appealing instead for voting transparency. Trump’s administration filed scores of lawsuits in the multiple battle ground states claiming voter fraud. The world erupted with both celebration and curses.

American citizens are seemingly headed towards a great conflict – one over election fidelity and the future course of the United States.

While Americans are struggling, one of its neighbors extended its hand.

Canadian Justin Trudeau could not hide his excitement any longer, hours after the media declared Biden’s win. Trudeau was the first Head of State to acknowledge Joe Biden’s win on Twitter. “I look forward to working with President-elect Biden, Vice President-elect Harris, their administration, and the United States Congress as we tackle the world’s greatest challenges together.”

Trudeau made his feelings known as he saw his escape from the stark ideological and economic conflicts from Trump’s Administration. Trump sought energy independence and a return of domestic manufacturing and farming which pulled much investment out of Canada and back into the United States.

Following his boss, Canadian’s Foreign Minister François-Philippe Champagne said Canada would reach out to the Biden administration to try to save TC Energy Corp’s Keystone XL oil pipeline, which would carry oil to the United States from Canada. Biden’s campaign has said he would rescind the project’s presidential permit. “This is the top of the agenda. We’re going to be making our case” Champagne told Canadian Broadcasting Corp.

In the speed of few hours, France, Germany, Ireland, UK, Italy, along with a few dozen other nation’s leaders took to Twitter to confirm Biden’s victory.

After his phone call with Biden, French president Emanuel Macron said: “We’ll have a lot to do together to promote our shared priorities – climate, global health, international security – and effective multilateral action.” Macron has long been annoyed by the U.S. quitting the Paris Climate Accord.

On June 1, 2017, Trump made a lengthy statement about the Paris Climate Accord: “Not only does the deal subject the U.S. citizens to harsh economic restrictions, it fails to live up to our environmental ideals. It could cost America as much as 2.7 million lost jobs by 2025 according to the National Economic Research Associates. The cost to the economy at this time would be close to $3 trillion in lost GDP and 6.5 million industrial jobs, while households would have $7,000 less income and, in many cases, much worse than that.”

British Prime Minister Boris Johnson, who has been scolded by Trump for allowing the Chinese telecom Huawei into Briton’s tele-network, also found a sense relief in dealing with the upcoming new pair in the White House. Following a phone call between the two, Boris spoke of “shared priorities” as did other European leaders, from “tackling climate change, to promoting democracy and rebuilding from the pandemic.”

Their long-waited wish-lists laid before Mr. Biden, but their rush run over reminds us of a similar event in Chinese history, the Opium War.

In 1839, a British-led force, along with France, Germany, Italy, Spain, and other European nations, invaded the Imperial Qing dynasty and its kingdom in China by warships and an occupying army. The western alliance seized Chinese cities and treasures and burned down the Royal Palace in an attempt to control China and profit from a forced one-sided trade. This eventually forced the Qing court to relinquish some of its territory and sovereignty to make peace with the European allies whom each took a slice of the Middle Kingdom.

There were no bullets or warships in this election, but those allies’ arms have similarly manifested through twitter and the world media before most Americans have even woken up from the stunning turn of events. Those foreign leaders have taken a quick and conclusive action to crown the next American president.

While world leaders were showering blessings to Biden’s new government, however, Mexican President Andrés Manuel López Obrador stood differently. “With regard to the U.S. election, we are going to wait until all the legal matters have been resolved.” He stated in his first tweet after media announcement of Biden’s victory.

Mexico is the largest trade partner of the U.S. with more than $600 billion annual commerce between the two countries. To many of its citizens, the U.S. economic relationship is their lifeline.

Though, not a friend of Trump, Mr. Obrador position has attracted a storm of international pressure. During his press conference on November 11, 2020, Obrador responded: “We can’t make any kind of recognition of a government that is not yet legally and legitimately constituted.” he told a news conference. “It’s not up to us, that’s interventionism.”

“Because we’re adhering to our policy of principles,” he said. “Also, we’re not a colony. We’re a free, independent, sovereign country. The Mexican government is not a puppet of any foreign government.”

The Painting ‘Allegory of Patience’ by Giorgio Vasari

In the Louvre! the Napoleon III Apartments