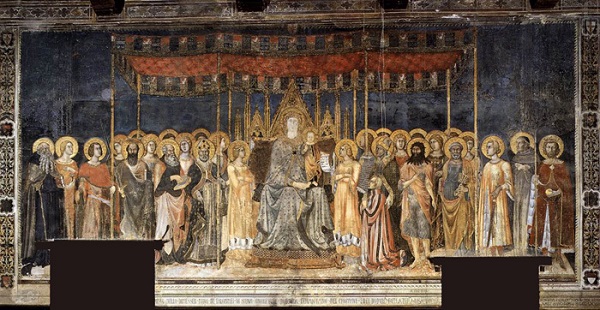 Lippo Memmi (c. 1291 – 1356) was an Italian painter from Siena. He was the foremost follower of Simone Martini, who was his brother-in-law. Simone Martini’s aristocratic language, rich in elegant Gothic forms, contributed to the development of the Gothic style. His fame brought him to work in Naples at the court of the King of France, at the Papal court in Avignon and in Assisi, where he executed the fresco cycle portraying the life of St. Martin in the lower basilica. Lippo Memmi can be considered the foremost follower of Simone Martini, together with whom he painted the magnificent Annunciation for the Cathedral of Siena (now in the Uffizi). The Annunciation, now in the Uffizi, perfectly illustrates the richness of his art which combines abstract gold grounds with colours conferring luminosity and depth to the composition.

Another important work showing how he was influenced by Martini’s style is the Maestà, a very large fresco which Memmi signed in 1317, produced for the Council Chamber of the Palazzo Pubblico of San Gimignano.

Lippo Memmi was one of the artists who worked at the Orvieto Cathedral, for which he finished the Madonna dei Raccomandati. Later he followed Martini at the Papal court in Avignon, where he worked until the mid-14th century.

After his return to Siena Memmi executed several works until his death in 1356.

The paired figures to the left and right were added by Bartolo di Fredi when the fresco was enlarged in 1367. The fresco was repaired along the lower edge in the 1460s by Benozzo Gozzoli, who may have repainted the heads of the two figures to the far right.

The Annunciation was painted around 1333 by Simone Martini and his brother-in-law Lippo Menni for the altar of Sant’Ansano in the Cathedral of Siena. The autograph of the two painters is immortalized in the Latin inscription below “SYMON MARTINI ET LIPPVS MEMMI DE SENIS ME PINXERVNT ANNO DOMINI MCCCXXXIII”. The inscription on the panel records that Lippo Memmi. In its elegance of line and rhythm, the exquisitely rendered details of costume, setting, and flower symbols, and the fragile sentiment of the participants in the sacred event, the Annunciationis a supreme masterpiece in the history of lyrical art.

The work is considered an absolute masterpiece and one of the greatest examples of Sienese Gothic painting, characterized by the wonderful elegance of both line and color.

The altarpiece was executed between 1329 and 1333 for the chapel of Sant’Ansano of the Cathedral in Siena by Simone Martini and his brother-in-law Lippo Memmi, to whom are attributed the two lateral figures: Saint Ansano – patron of Siena – and Saint Giulitta.

On the gold background the figures of Angel Gabriel and the Virgin enhances Gothic line, without narrative details: just the central pot with lilies, symbolizing Mary’s purity, and the olive branch. The golden relief inscription starting from the Angel’s mouth contains beginning words of the Annunciation.

The Archangel has just touched ground in front of the Virgin as shown by his unfold wings and his swirling mantle. The scene seems a theatrical performance, as stressed by the comic strip like sentence in the middle of the composition with the greeting of the angel. The Virgin is portrayed almost surprised and frightened by the sudden appearance. Her movement, so prim and elegant, adds a certain effect of sophistication to the work.

The altarpiece has a gold background, so bound to tradition, and still very much in demand for the depictions of sacred stories. The artists adhered therefore to what customers required, but they used to insert some details that could make the composition more realistic.
For this purpose Simone Martini included some delightful details in the main scene as the marble floor, the mantle of the archangel, the pot of lilies, the half-closed book of Mary and her throne, all of which suggest a real space, otherwise penalized by the gold background.

The garments of the four characters take shape thanks to the snaky and decorative line typical of Sienese school.