We know that traditions are sacred, that year after year we repeat customs when celebrating a party such as Christmas. It is very common that each year our table has the same meals, with almost the same flavors.

But in this atypical year, where everything has been turned upside down, it may be a good time to turn our Christmas table upside down and surprise everyone with different dishes.

We can imagine being dining in France, Finland or Argentina.

We are going to see what is served at Christmas in some countries of the world and, if we are tempted, we will have the opportunity to put the turkey aside and encourage ourselves to prepare a different table.

If we talk about culinary issues, France is one of the emblems in flavors and styles. It is a large country with several regions that maintain their traditions and are greatly influenced by neighboring countries, such as Germany and Italy. However, when Christmas night comes, French families prepare very similar dishes. Typical Christmas dishes of today are those that we could all associate with a high-quality menu, such as foie gras, cheeses, oysters, smoked salmon, caviar, scallops and other seafood; In some areas, however, meat plays a more prominent role, especially Duck and Goose. 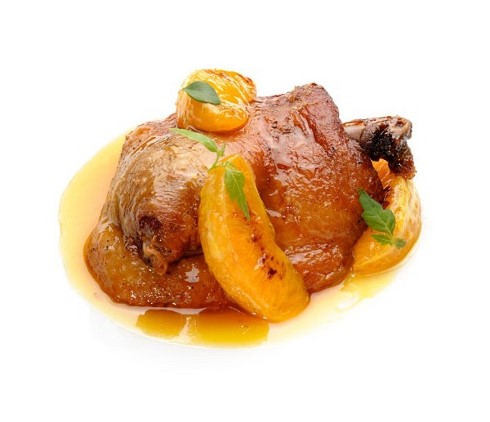 One of the emblematic dishes of French cuisine is “Duck with Orange”. Let’s see how it is prepared.

Your orange duck doesn’t start with the duck, but with the orange. Peel it well and remove all the white part of the orange flesh to be able to marinate it for 1 hour. While the orange is absorbing part of the alcohol, clean the duck well. Also make some cuts on the breast and thighs. You want to know why? Be patient, but we will use them in the final part of this step). Heat the margarine for 30 seconds in the microwave so that it remains a little more liquid and mix it with one of the crumbled tablets. Now, with this resulting liquid, paint the inside of these cuts and put the macerated orange on the inside of the duck. Leftover Cointreau save for later. Go preheating the oven to 180º. Now it’s time to get the rest of the oranges. Take one and do not peel it, but cut it into unpeeled slices and, in turn, cut these slices in half. Put them in each of the cuts we have made.

Now this duck with orange slices goes into the oven. To do this, place it on an oven-safe tray and sprinkle it with the juice of a third orange. Hence, in the oven that we have previously heated and see watering the duck from time to time. Also, to give it flavor, you can use the juices that the duck releases during cooking. Put the grill option while the oven is on and keep the duck inside for 15 more minutes. Be careful if it toasts a lot, we recommend that you lower the tray or cover the duck with aluminum foil to protect the meat from the heat.

While the duck finishes cooking, make a syrup. Put sugar in a saucepan with three tablespoons of water and heat without caramelizing but obtaining a more or less translucent and thick liquid. Then, after an hour of the duck cooking, take the tray with the meat out of the oven and cut the orange into thin slices. Distribute them on the tray and paint the whole duck with the syrup. Pour the rest of the Cointreau onto the tray and put the tray in the oven for 20 more minutes. Click with a skewer to see if the duck is done and as soon as it comes out dry, ready to serve! Put it whole on the table and… Voila!

Roast poultry is a tradition also in Switzerland, Germany and Great Britain.

The Scandinavian countries turn more to the preparation of cold cuts, fish and seafood.

In Finland they also celebrate Christmas Eve as the beginning of Christmas dedicating a special family dinner. It is customary to meet at home after bringing candles to the cemetery.

Lunch is light, sometimes based on the typical pudding or rice pudding and fruit compote, halfway between food and dessert.

In the afternoon -or late at night- families have a full dinner and gifts are exchanged. Fish dishes are not lacking, with salmon, herring and gravlax as preferred options, accompanied by casseroles and winter vegetable gratins. The Christmas ham also has many followers, and each family prepares their favorite salads.

But what is gravlax? Let’s see what we need to feel in Finland on Christmas eve.

In a bowl mix the sugar, salt and crushed pepper. Place half of this mixture on a plate, on top of it arrange the salmon, cover it with dill leaves, cover with the other half of the mixture and then with plastic wrap and place a soft weight on it. Leave in the refrigerator for 24 hours. Remove, rinse the filet well, dry it and cut very fine. Mix the cream cheese with a little dill, arrange it on the bread or blinis, over this the gravlax and serve. And now … Nauttia!

Finally, if we talk about Christmas desserts, one of the most famous ones is the typical English pudding. Fluffy and full of dried fruit, excellent to enjoy for a toast.

Let’s see what we need.

First, we put the butter and sugar in a bowl and beat with a spatula until forming a cream (we cream the butter)

Then, we add an egg and beat, and then the other egg and the yolk and continue to beat. Finally, we add the milk and integrate.

Mix the flour, the baking powder, the raisins and the polished fruits in a separate bowl, and incorporate into the first preparation, adding the vanilla essence as well. Tip: mix with enveloping movements, the air in the preparation will make the pudding more airy / fluffy.

We butter and flour a mold (of pudding or cake, if you do it in a cake mold it will look like sweet bread) and pour the preparation in it. Cook in a moderate-low oven (150 – 190 degrees) for one hour.

And then, uncork the champagne and enjoy!

These are just some ideas to make a different dinner in a year that has undoubtedly been very different for everyone.

So, take courage and have an incredible night.