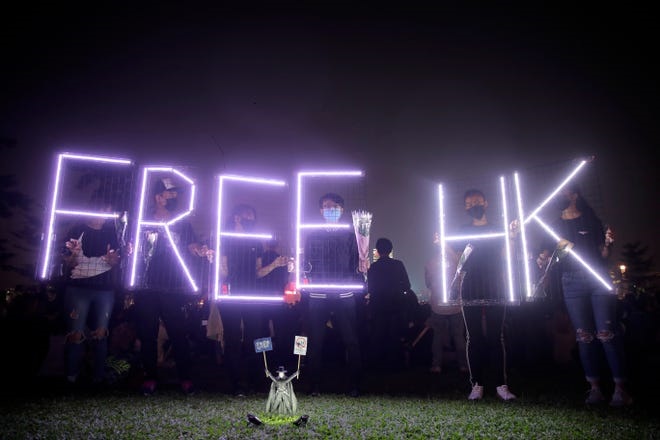 Chinese international students are studying for years in the United States without adopting democratic values. That’s our failure, not theirs.

Over the past few weeks, I’ve written several columns supporting protesters in Hong Kong. And each time, my in-box fills up with angry messages from Chinese students in the United States. Hong Kong is threatening the unity and security of China, they write. And so are liberal Westerners, with their arid ideas about democracy and human rights.

But these people are themselves studying in the liberal West. Clearly, we’re not doing a very good job teaching them.

Consider the vitriol that Chinese students have recently heaped upon pro-Hong Kong voices on our campuses. At the University of California, Davis, students collecting signatures in support of the Hong Kong protests were accosted by classmates who grabbed their flag, broke the pole and threw it into the trash. Chinese students also urged university officials to cancel a campus rally on behalf of Hong Kong.

A Hong Kong activist attending Yale reports that students have harassed him online, and the university has provided him security. And at Columbia, students attending a talk by another Hong Kong protest leader stood up and sang China’s national anthem, to show their support for Beijing.

That’s their right, of course, while they’re in the United States. But it’s not a right recognized by their government in China, where political speech is closely monitored and restricted. Put simply, the Chinese students are exercising freedom to back a regime that is hostile to it.

And that, in turn, reflects a failure of the schooling they are receiving here. Our entire system of liberal education is premised on the skills and habits of democratic life: reason, civility and the free exchange of ideas. If Chinese students spend several years in the United States and decide they don’t like democracy, we must not be making a strong enough case for it.

In part, this is because many Chinese students are isolated and lonely. Democracy starts at home, we like to say, but we have not really welcomed the more than 360,000 Chinese people who are studying here.

In a 2013 study by Yale researchers, 45% of Chinese students on American campuses reported symptoms of depression, and 29% experienced symptoms of anxiety. Those were astonishing figures, when you consider that just 13% of the overall student population reported depression and anxiety.

English language is a perennial problem for Chinese students. Coming from an education system that demands rote memorization, they also struggle with assignments requiring analysis and argument.

Most of all, though, Chinese students feel detached from their American peers. In a 2017 study, researcher Kun Yan found that “making good friends with Americans” and “successful communicating with Americans” were Chinese students’ biggest challenges. They usually can’t pick up on the nuance and humor in social situations with Americans, who seem to make little effort to include them. So they often converse only with other Chinese people here in America or with family back home, on their phones and computers.

And a majority also consume mainly Chinese media, which feed them a steady diet of state propaganda.

Making a better pitch for democracy

Should we be surprised, then, that the students frequently echo what their government says? We’ve done little to integrate them. We’re only too happy to take the tuition dollars of Chinese students, who contribute more than $30 billion to the American economy each year. But we’re not willing to do the hard work of making them feel at home.

That would require us to provide bridge programs in language and culture when the students arrive, along with ongoing English instruction during their stay here. We should also create more mental health services for them, including therapists who are conversant in Chinese.

Most of all, we should establish structured conversations in which Chinese students are paired with American ones to discuss culture, education and, yes, politics. Some Chinese students would surely continue to repeat the slogans of their leader, Xi Jinping, whose government and state-controlled media have contrasted China’s authoritarian “stability” to the “chaos” of the West. But others would come to appreciate the virtues of democracy, which is precisely what Xi doesn’t want.

We love to tout the “diversity” of our universities, including our growing international student population. But if newcomers from abroad simply recreate their social patterns from home, they won’t learn anything new. Neither will the rest of us, who are missing a big opportunity as well. If we really believe in democracy, we should practice it with our visitors. And may the best system win.

Jonathan Zimmerman teaches education and history at the University of Pennsylvania. He is the author of “The Amateur Hour: A History of College Teaching in America,” which will be published next year by Johns Hopkins University Press.