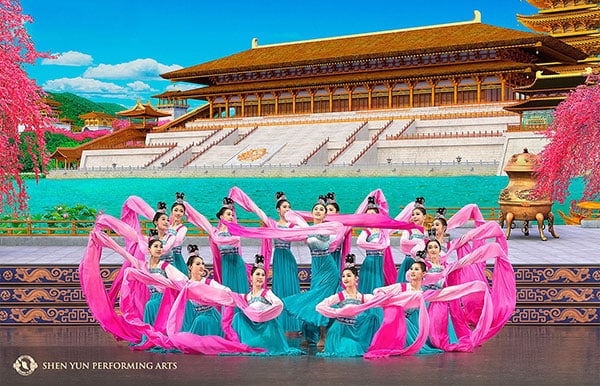 Costa Mesa, CA – With over a decade of success, Shen Yun returned to Coast Mesa for its 2022 world tour, making its two-week fresh debut after the pandemic. Locals have been awaiting its return for over two years, hoping once again to immerse themselves into its colorful performance to sweep away dullness and anxiety that squirrelled through the pandemic ordeals.

While audiences obviously enjoyed Shen Yun’s magical feast, this time they experienced something new that Shen Yun has quietly brought in. The show takes audiences into a deeper storytelling space through its brand-new production.

In connecting East and West, past and present, Shen Yun flawlessly united every corner of the stage and every musical note to present its lavish customs and thrilling dances. But this year, apart from its visual enrichment, Shen Yun’s programs decipher a deeper storyline through simple yet profound dance movements and postures.

Classical Chinese dance is highly sophisticated in Shen Yun’s performances, and Shen Yun’s decades of performing have gradually opened western audience’s eyes to this ancient art form. But stories depicted in the programs, on some occasions, may get a little lost in translation should a person have no relation with Asian culture. It is no surprise that the Monkey King program has been featured in every show to meet audiences’ enthusiastic demand. It is so funny and exotic for both young and old demonstrated through long-lasting laughs and raucous applause. But several programs designed this year might have overtaken Monkey King in the laughs, while additionally providing audiences with thoughtful revelations. These stories might not be unfamiliar, but Shen Yun shines new insights by reflecting our social lives from the past to present.

Chinese Restaurants are everywhere, we all enjoy their dumplings and noodles, but that is not limited to Chinese cuisine. The Restaurant Story tells us some things that even most Chinese have no idea about. The story set in a backdrop of the Ming Dynasty, in an affluent neighborhood where two famous family-owned restaurants are next to each other. they all have authentic family secret recipes and skills passed down through the generations, and they are both successful. Ironically, as they are next to each other, the competition could get intense and confrontation.

So how can these two-family restaurants find peace? As they are so close in high food quality, market, and even in their business model, Shen Yun arranged a common accident in restaurants, fire. While they are fighting over their pride, one restaurant catches fire, suffering large losses. The owner of the restaurant cries out in desperation. At this sad moment, instead of laughing at their enemy, the other restaurant extended helping hands and financial support, offering unconditional support for the damaged restaurant. In the end, the two owners become friends, and establish a business harmony between them.

The story can also be seen in today’s shopping mall businesses, to avoid fights among similar vendors, shopping malls create many different rules and designs to avoid conflicts of interest among themselves. But Ancient China was a loosely governed society, there is a saying: “Heaven is above, Emperor is far way, no one in charge.” But Chinese people have lived together for such a long time – 5,000 years. We all know there were countless philosophers and saints born in the Middle Kingdom to educate people of all backgrounds. But one thing that integrated the whole traditional Chinese system, before Communists took power in 1949, is common people’s self-consciousness in finding a pathway to achieve social harmony, from Emperors to militants, from high officials to common folks. The Ancient Chinese passed traditions down through generations on how to achieve social harmony amidst conflicts, rather than going to court.

Without words, all characters’ emotions are interpreted through dancers’ movements and postures, led by Shen Yun’s enchanting Eastern and Western musical and life-size 3D backdrops. The dancers create several high points arouse hard laughs from audiences, but the fire pauses everyone’s minds of entertainment in an instant. The choreography purposely expands the space of reflections during this fast-paced performance.

The Restaurant story retells a very common tradition that has been long lost in China and elsewhere – that we are all facing every day in dealing with loss and gain, pride and humility, selfishness and compassion. These human struggles big and small are fully manifested through this program. It encourages people to find an alternative path to solve conflicts, and manifests the power of compassion.

After the deadliest pandemic of our century, Shen Yun is just in time for society to recover and renew through these deeper traditions and beauty, which always surprise us and enrich us.