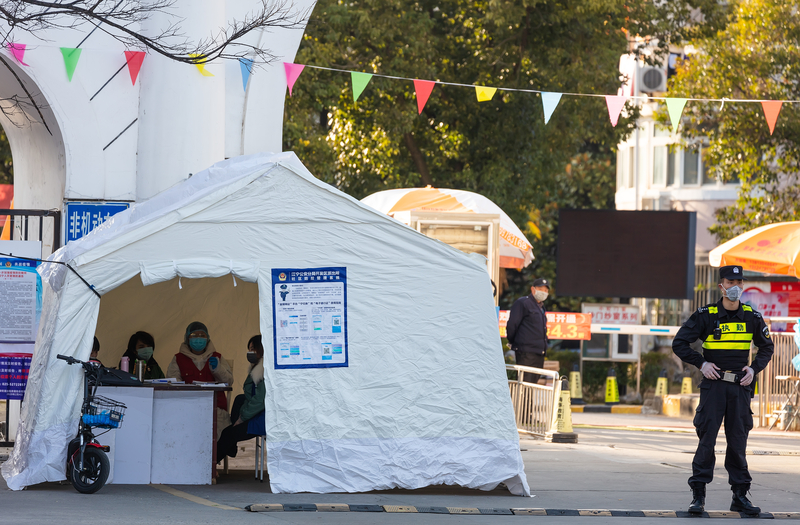 Since the outbreak of Covid-19 in 2019, the world has yet to be given access to the original source of the virus and how the virus spread in China. The Chinese communist government’s routine cover-up not only delayed the world response, but caused a global economy and social calamity. Photo shows a residential district in Jiangning District, Nanjing City, Jiangsu Province where a security guard and staff are on duty in a temporary tent by the gate.The staff take temperatures and register for those entering.
By Joe Knox February 21, 2021 6:30 pm PST
Facebook
Twitter
SHARE
Facebook
Twitter

On Feb 17, 2021, Biden Administration announced that the United States will pay the World Health Organization $200 million to rebuff Trump’s attempts to withdraw from the international body. During his presidency, Trump accused WHO “under China’s total control” of delaying the world response to Covid-19 and obstructing the international investigation to the sources of the virus.

Since the Biden Administration took power, they have reversed the U.S. government’s course with regards to the World Health Organization. Former President Trump believed that the WHO was beholden to the influence and coercion of China; Trump broke US ties with the organization in 2020. The Biden Administration has since reversed this course in one of dozens of immediate executive orders, within days of taking power. The US is now a part of the WHO again.

Recently the WHO has been granted access to China to seek the origin of the Corona Virus. Interestingly, however, there have been reports that the Chinese government has refused to supply early data about the outbreak, nor access to key sites. They also vehemently deny the theory that the virus leaked from nearby virology lab; and that the virus is a bioweapon. Instead, the new current line is that the outbreak was started by frozen food. That perhaps it was a frozen food import, and therefore the virus is not of Chinese origin.

In a recent story about Super Micro Computing Inc., in 2010, the U.S. Department of Defense found thousands of its computer servers secretly sending military network data to China. The department discovered clandestine codes hidden in chips that handled the computer startup process.

In 2014, Intel Corp. discovered that an elite Chinese hacking group had breached its network. Which in 2015, led to the Federal Bureau of Investigation warning multiple companies that Chinese operatives had concealed an extra chip loaded with a coded backdoor. Furthermore, it’s been reported that China’s exploitation of products made by Super Micro, has been under federal scrutiny for much of the past decade.

Are the American people supposed to believe a government that is constantly engaging in cyber espionage against them? What other examples of lies and untrustworthiness of the CCP could be found from other countries on the international stage?

Truthfulness. It’s a founding principle to basic morality. Yet, when presented with such juxtaposing stories, it seems clear that we all live in a time when truth is elusive, and someone is lying. There are many reasons to be doubtful of the claims of the Chinese government that it is completely unrelated to the pandemic.

As the virus is mutating across the world, it’s doesn’t seem too far-fetched to theorize that Covid-19 leaked from a bioweapon lab. International experts being denied vital early data and immediate access could only raise the profile of suspicion.