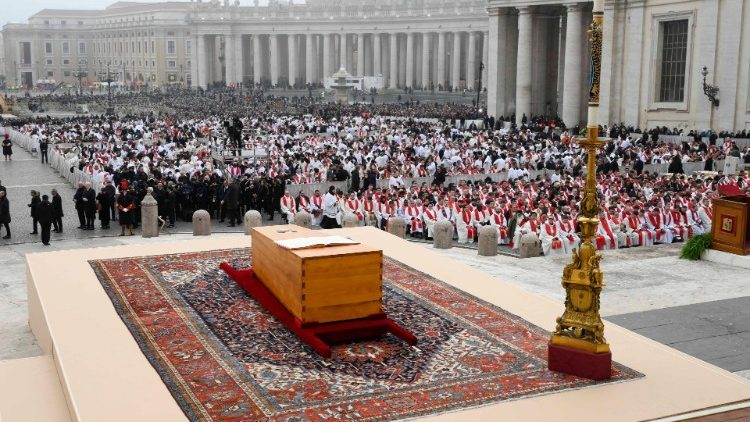 Only Italian and German delegations are invited to the former Pontiff’s burial, heads of state excluded.

“With sorrow, I inform you that the Pope Emeritus, Benedict XVI, passed away today at 9:34 in the Mater Ecclesiae Monastery in the Vatican,”  This announced the passing away of Pope Emeritus Benedict with the Director of the Press Office of the Holy See, Matteo Bruni, acting as the carrier of sad news.

This came days after his successor, Pope Francis, asked the Catholic faithful to pray for the retired Pontiff, claiming he was “very sick”. It was also because of failing health that the now-deceased Pope resigned from the papacy on February 11, 2013. This made him the first pope in 600 years and the second in the history of the Catholic church to resign from the papacy instead of holding on till his death. His death, at the age of 95, represented another eminent personality who bade the world farewell in 2022.

Pope Francis visited the Vatican to pay his respects to his predecessor shortly after his demise on Saturday morning. In his words, according to CNN;

“We are moved as we recall him as such a noble person, so kind, and we feel such gratitude in our hearts, gratitude to god for giving him to the church and to the world,” Francis said in Saint Peter’s Basilica while leading traditional vespers ceremony ahead of New Year’s Day.

“Gratitude to him for all the good he accomplished and, above all, for his witness of faith and prayer, especially in these last years of his life. Only God knows the value of his sacrifices for the good of the church,” Francis added.

Pope Francis will lead a funeral service for the departed St. Benedict, as he is now known after beatification, on Thursday, 09:30a.m in local time, at St. Peter’s square, according to an announcement made by Bruni.

In line with the wishes of Pope Benedict XVI, the funeral will take place in a ‘simple’ fashion, with only delegates from Italy and Germany invited. This was because Pope Benedict XVI, born Joseph Ratzinger, originated in Marktl, Germany and lived in Italy for a considerable 40 years of his life.

However, any head of state who wished to pay his final respects to the late Pope may do so in a personal capacity, as reported by the CNA. Italy President Sergio Mattarella and Prime Minister Giorgia Meloni were reported to have paid their respects to Benedict on Monday morning at St. Peter’s Basilica, where his body will lie in state through Wednesday.

Vatican news declared that the former Pope’s body will lie in state in St. Peter’s Basilica in the Vatican from Monday so the faithful could bid farewell. An estimated audience of 30,000 will attend his funeral, a far cry from the 5 million faithful that thronged Italy at Pope John Paul’s departure in 2005 and an even farther cry from the number of representatives around the world who flew in to pay their last respects to Queen Elizabeth II, who passed on three months earlier.

The Queen’s funeral saw delegates from virtually every nation worldwide in attendance. Also, the Pope’s farewell may lack the pomp and pageantry evinced in the monarch’s, who was borne in an elaborate procession from Westminster Abbey to the Windsor Chapel, where she was finally committed to Mother Earth.

Pope Emeritus Benedict’s funeral constitutes a unique situation because while there are prescribed rites for the departure arrangements of a deceased, there is no guidebook on how to send off a retired one. The organizers may have to resort to their discretions in this respect. For example, Benedict will be buried in the papal red, but he will be wearing black shoes instead of the red shoes he wore as Pope.

CNA stated that 159 delegations attended the 2005 funeral of John Paul, the last reigning Pontiff to die. Also, 157 cardinals, 700 archbishops, and more than 6,000 journalists, photographers, and other media personnel attended. We are not likely to see a farewell party of such magnitude on Thursday when the remains of the Pope will be interred in the crypt of the central part of St. Peter’s Basilica.