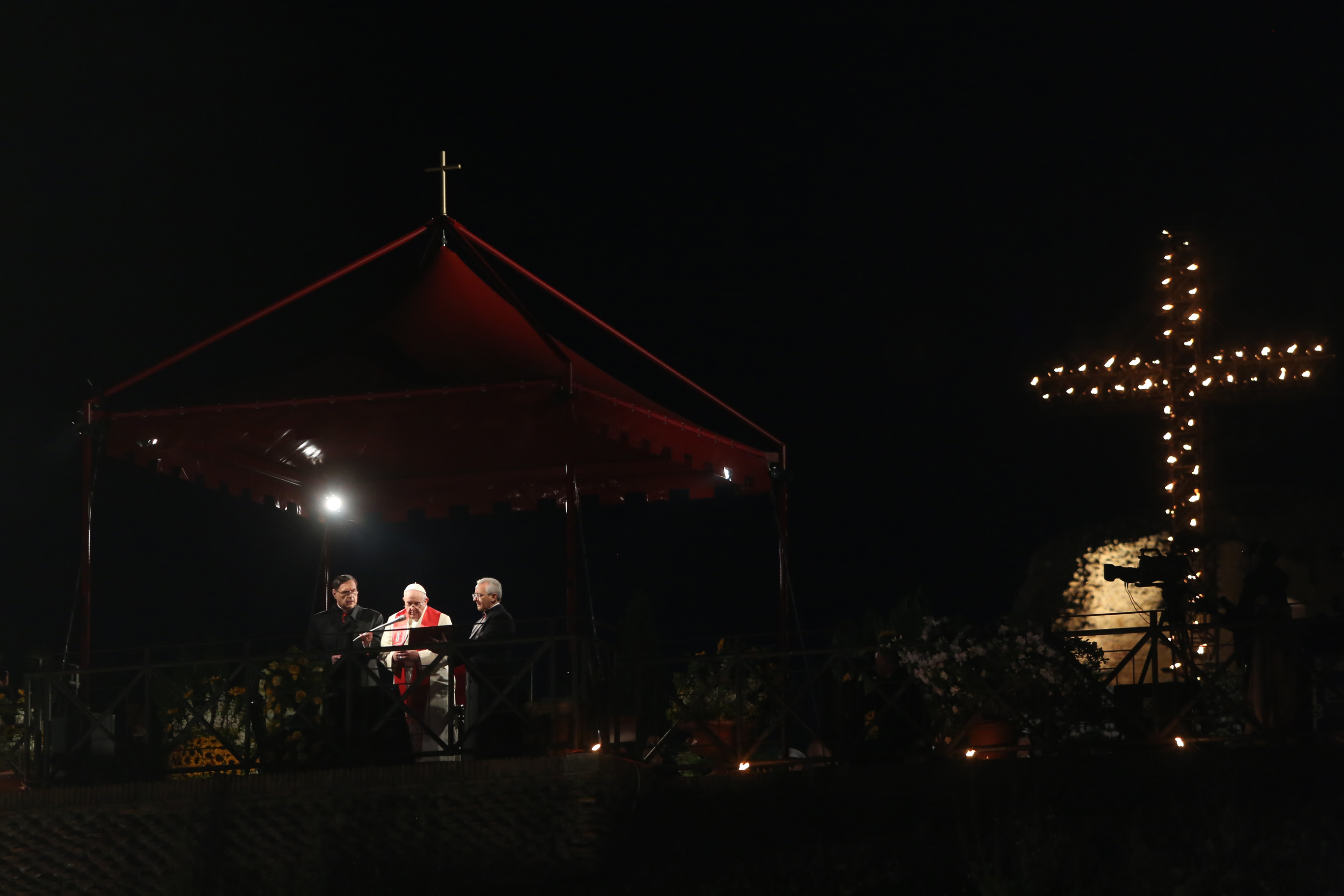 Thousands of faithful attended Pope Francis’ “Way of the Cross” prayer session in Rome’s Colosseum on Friday, a liturgy overshadowed by the Ukraine conflict.

It was the first time since 2019 that the annual Good Friday ceremony, which commemorates Jesus Christ’s death on the cross, was held at the Roman monument, owing to the COVID-19 pandemic.

Additionally, it occurred two days before to Easter, Christianity’s most significant holiday.

The pope, who has consistently denounced the Ukraine crisis and urged for an Easter truce, hoped that “adversaries” might “shake hands” and “taste mutual forgiveness.”

“Disarm the raised hand of brother against brother,” he remarked.

“I have lived in Rome for more than 30 years, but today it seemed very important to me,” Stefania Cutolo, 52, an Italian teacher remarked, as a choir practiced for the evening ceremony.

“The message tonight, after two years of closure due to the pandemic, is doubly important. In this context where nationalism is returning to Europe, we must act “she said.

Since 1964, the Way of the Cross has been staged in the sumptuously lighted Roman amphitheater. For the previous two years, the event has been hosted in the Vatican’s Saint Peter’s Square, with extremely low attendance due to the health crisis.

“We meet the whole world here. We hear all languages. It’s marvelous,” Marie-Agnes Bethouart, 71, who attended Friday’s event with her husband and two grandchildren commented with enthusiasm.

A yellow and blue flag shone out amid the candles among the throng, Ukraine’s national colors.

Ukraine’s conflict loomed large over the annual Good Friday Colosseum procession in Rome, after Ukrainian outrage at the Vatican’s choice of a Russian woman to share carrying the cross with a Ukrainian woman.

In an apparent attempt to defuse the objections, when the two women, who work together at a Rome hospital, were invited to pause in “prayerful silence” and pray in their hearts for world peace, the ceremony’s participants were invited to as well.

The original script, created with cooperation from the women, included the possibility of “reconciliation.” Both the Ukrainian envoy to the Holy See and a Kyiv archbishop objected to such language.

They objected to displaying what they saw to be a message of healing when Ukraine is wracked by a Russia-instigated conflict.

For the first time since before the pandemic, Friday night’s somber torchlit procession returned to Rome’s old arena. Thousands of pilgrims and tourists held tiny, lighted candles as Pope Francis sat behind a canopy built on a high observation point, appearing melancholy and wearing a white cloak against the rainy night weather.

At each Station of the Cross, which reflected facts of Jesus’ suffering and crucifixion, a new family carried the cross and read aloud reflections written by them.

In interviews, the women were identified only by their first names: Irina, a Ukrainian nurse, and Albina, a Russian nursing student.

Albina explained before of the procession that it was important to “pray for the children who are no more, for the soldiers who lost their lives and can’t even be buried.” Irina referred to the burden of sharing the cross-carrying as a “great responsibility.”

The Vatican remained silent in the face of the demonstrations. However, as a result of the flap, the planned meditation, which was to be recited as they shared carrying the cross, was significantly abbreviated for the procession.

“In the face of death,” the meditation said, “silence is the most eloquent of words.” After that, participants were urged to stop and “pray for peace in the world.” For a long while, the two ladies peered somberly into one other’s eyes as they carried the cross.

Matteo Bruni, the Vatican’s spokesperson, said the statement was abbreviated to let people remain in “silence and in prayer.”

Francis omitted any mention of the flap. Rather than that, he prayed at the procession’s end that God “bring adversaries to shake hands, so that they taste reciprocal forgiveness.” Additionally, he asked for God to “disarm the hand raised by brother against brother, so that where there is hatred, harmony will bloom.”

While Francis has condemned the February 24 invasion and assaults on Ukraine as a “sacrilege,′′ he has abstained from labeling Russia as the aggressor, despite his many allusions to Russian President Vladimir Putin.

According to SIR, the Italian bishops’ conference’s official office, numerous Ukrainian religious media outlets declined to broadcast or report on the Colosseum procession this year in protest.

However, the rest of the world’s faithful hailed the choice to put the two women together. Hundreds of Catholics gathered on the courtyard of Notre Dame church in Paris for Good Friday prayers.

Jennifer Kilgore-Caradec, a native of the United States, told The Associated Press at Notre Dame that the two women holding the cross was a “really emotional and profound gesture. I think that real people in the real world are concerned about peace,” she said. “We want peace, we don’t want war.”