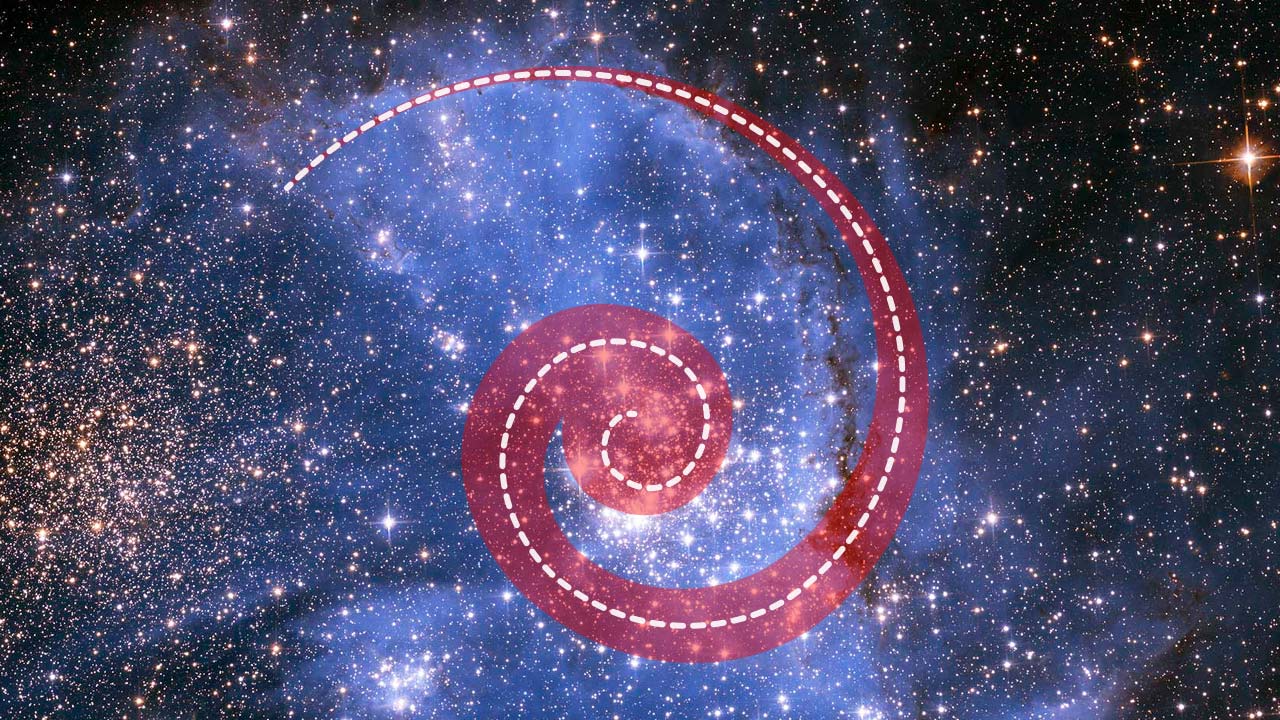 The massive star cluster NGC 346, located in the Small Magellanic Cloud, has long intrigued astronomers with its unusual shape. Now researchers using two separate methods have determined that this shape is partly due to stars and gas spiraling into the center of this cluster in a river-like motion. The red spiral superimposed on NGC 346 traces the movement of stars and gas toward the center. Scientists say this spiraling motion is the most efficient way to feed star formation from the outside toward the center of the cluster. (Image: NASA, ESA, Andi James)
By Staff October 21, 2022 12:57 am PST
Facebook
Twitter
SHARE
Facebook
Twitter

Nature likes spirals — from the whirlpool of a hurricane, to pinwheel-shaped protoplanetary disks around newborn stars, to the vast realms of spiral galaxies across our universe.

Now astronomers are bemused to find young stars that are spiraling into the center of a massive cluster of stars in the Small Magellanic Cloud, a satellite galaxy of the Milky Way.

The outer arm of the spiral in this huge, oddly shaped stellar nursery called NGC 346 may be feeding star formation in a river-like motion of gas and stars. This is an efficient way to fuel star birth, researchers say.

Though a proxy for the early universe, at 200,000 light-years away the Small Magellanic Cloud is also one of our closest galactic neighbors.

Learning how stars form in the Small Magellanic Cloud offers a new twist on how a firestorm of star birth may have occurred early in the universe’s history, when it was undergoing a “baby boom” about 2 to 3 billion years after the big bang (the universe is now 13.8 billion years old).

The new results find that the process of star formation there is similar to that in our own Milky Way.

Only 150 light-years in diameter, NGC 346 boasts the mass of 50,000 Suns. Its intriguing shape and rapid star-formation rate has puzzled astronomers. It took the combined power of NASA’s Hubble Space Telescope and the European Southern Observatory’s Very Large Telescope (VLT) to unravel the behavior of this mysterious-looking stellar nesting ground.

“Stars are the machines that sculpt the universe. We would not have life without stars, and yet we don’t fully understand how they form,” explained study leader Elena Sabbi of the Space Telescope Science Institute in Baltimore. “We have several models that make predictions, and some of these predictions are contradictory. We want to determine what is regulating the process of star formation, because these are the laws that we need to also understand what we see in the early universe.”

Researchers determined the motion of the stars in NGC 346 in two different ways. Using Hubble, Sabbi and her team measured the changes of the stars’ positions over 11 years. The stars in this region are moving at an average velocity of 2,000 miles per hour, which means that in 11 years they move 200 million miles. This is about 2 times the distance between the Sun and the Earth.

But this cluster is relatively far away, inside a neighboring galaxy. This means the amount of observed motion is very small and therefore difficult to measure. These extraordinarily precise observations were possible only because of Hubble’s exquisite resolution and high sensitivity. Also, Hubble’s three-decade-long history of observations provides a baseline for astronomers to follow minute celestial motions over time.

The second team, led by Peter Zeidler of AURA/STScI for the European Space Agency, used the ground-based VLT’s Multi Unit Spectroscopic Explorer (MUSE) instrument to measure radial velocity, which determines whether an object is approaching or receding from an observer.

“What was really amazing is that we used two completely different methods with different facilities and basically came to the same conclusion, independent of each

other,” said Zeidler. “With Hubble, you can see the stars, but with MUSE we can also see the gas motion in the third dimension, and it confirms the theory that everything is spiraling inwards.”

But why a spiral?

“A spiral is really the good, natural way to feed star formation from the outside toward the center of the cluster,” explained Zeidler. “It’s the most

efficient way that stars and gas fueling more star formation can move towards the center.”

Half of the Hubble data for this study of NGC 346 is archival. The first observations were taken 11 years ago. They were recently repeated to trace the motion of the stars over time. Given the telescope’s longevity, the Hubble data archive now contains more than 32 years of astronomical data powering unprecedented, long-term studies.

“The Hubble archive is really a gold mine,” said Sabbi. “There are so many interesting star-forming regions that Hubble has observed over the years. Given that Hubble is performing so well, we can actually repeat these observations. This can really advance our understanding of star formation.” (Source:hubblesite.org)