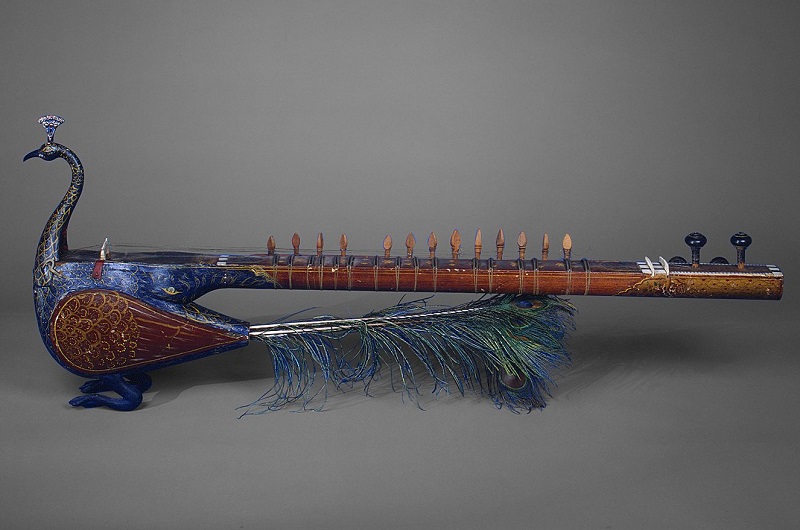 The familiarity of traditional musical instruments has slowly faded away amongst the younger generation only to be replaced by the Tabla and Harmonium. Traditional and devotional musical instruments in the medieval age were an integral part of Sikhism in India. Music lies at the heart of Sikh tradition as devotees sing and listen to hymns in their holy shrines. One such instrument which garners more limelight than others is the ‘Taus’. Taus means peacock in Persian and is indeed shaped like one. The appearance of the instrument is enough to capture everyone’s attention. Mostly consisting of a 28-string body, the instrument is played with a bow made of horse hair. Carved from a single piece of wood, the instrument requires great craftsmanship. It resembles a modern-day Sitar as the frets and necks are played according to the raag (musical note). The instrument is known for its deep mellow sound.

Sikh Gurus gave immense significance to devotional music, so much so that they themselves invented several musical instruments. While Jodi (an instrument which looks like the modern-day Tabla) was invented by the fifth Sikh master Guru Arjan Dev, he is also known for designing the Saranda, also played with a bow, and it is still used to play regional folk music in South Asian countries. Similarly, the Taus was created by the sixth Guru, Guru Hargobind. Indian music is known for legendary stories and quirky trivia.

According to well-known Taus player Bhai Avtar Singh, ‘Guru Hargobind’s Sikhs were singing and playing instruments outdoors under a tree enjoying nature. After a while, the musicians took a break and rested their instruments up against a tree. A peacock waddled into the group and cried with its wailing sound. All of the stringed instruments resonated with the sound of the peacock cry, and the strings started humming.’ He added that the sound was so ethereal that the Guru said, ‘Let us design an instrument that sounds like this.’

Guru Gobind Singh, the 10th Sikh Guru modified this heavy instrument 300 years ago. Referred to now as ‘Dilruba’, it was easier to carry for the Sikh army on horseback so that they did not miss out on music while on their extensive travels. The Dilruba is a cross between two other stringed instruments, the Sitar and Sarangi. The instrument was transformed further to create a more modern variant, the Esraj.

Recently, a debate regarding the revival of traditional musical instruments and letting go of modern ones has reignited in many parts of the Indian subcontinent. The Harmonium, which is used for singing hymns in Sikh holy shrines, was brought in by the French in the 1800s. Devotees are now wishing to revive the usage of instruments native to the subcontinent that have been long forgotten. However, a replacement is considered an unpragmatic idea by some as it takes a lifetime to master a strong instrument. Difficult to learn and master, the real question is, have these instruments lost the battle to modern instruments?