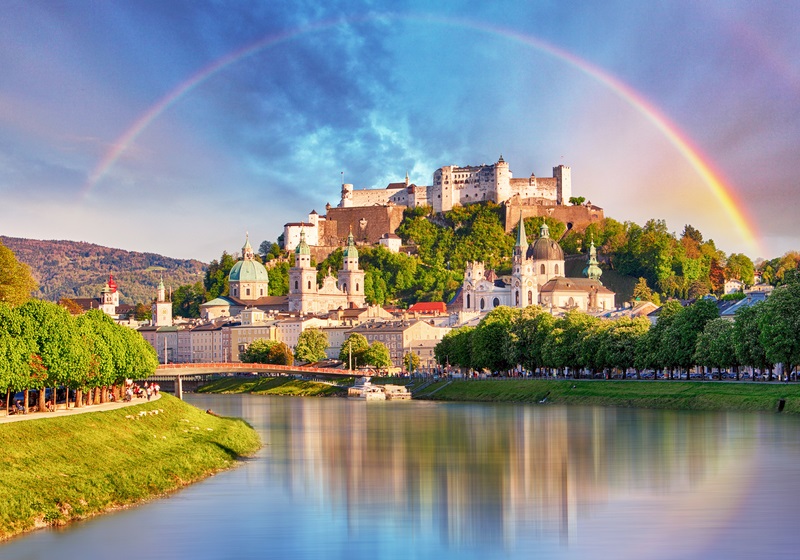 In 1965, the American musical drama The Sound of Music premiered with Hollywood icons Julie Andrews and Christopher Plummer as the leads. To this day, it is one of the most commercially successful films of all time. An adaptation of the 1959 theater musical with the same name (The Sound of Music) is based on Maria von Trapp’s real-life story, detailed in her memoir titled The Story of the Trapp Family Singers.

The story is one of love, bravery, loyalty, and melodies, as Maria, a young Austrian at the time, was sent as a governess to care for the children of a retired naval captain, George von Trapp. Trapp, a widower, fell in love with Maria as she won his heart and those of the children while helping them embrace music within the household.

This connection between love and music came at a time when the Trapp family sought a way to survive during what is known as Anschluss, Austria’s annexation into the German Reich in 1938, prior to the Second World War.

Singing as a family helped them cope and bear the pressure felt when Trapp was being called upon to join the Nazi’s navy. This struggle inspired the composition of the song “Edelweiss.” Written in 1959 by Richard Rodgers and Oscar Hammerstein II for the Broadway rendition of the film, “Edelweiss” became one of the most impactful songs performed in the film.

The word originates from the Leontopodium alpinum, a mountain flower resembling a daisy and sunflower. Often termed called edelweiss, the plant is one of Austria’s national symbols and carries the traditional meaning, “dedication to a loved one.” The flower is worn as an emblem by specific personnel of the Austrian Army, and the state prohibits any picking of the flower by the public. Overall, the significance of the plant is linked to a deep expression of patriotism for Austria.

The song can be heard twice in the film adaptation. As the influence of Maria’s kind spirit begins to unite the family, Captain Trapp finds himself opening up and becoming more willing to display his love for his children. In one of the most compelling moments of the film, he sits with the family in the drawing room, serenading them and saying goodbye to what his homeland once was. He sings, “Edelweiss, Edelweiss, every morning you greet me. Small and white, clean and bright, you look happy to meet me.” The song is completed by a declaration of his loyalty to his homeland: “Edelweiss, Edelweiss. Bless my homeland forever.”

As Trapp enters the second verse, he is joined by his eldest child, Liesl, played by Charmian Carr. She completes the ballad with a beautiful harmony while her brothers and sisters, Friedrich, Louisa, Kurt, Brigitta, Marta, and Gretl, all fondly gaze at their father. In the film, Plummer’s vocals are dubbed by renowned playback singer Bill Lee; however, the original version of him singing the tune has since been discovered and shared online.

“Edelweiss” was also performed in the scene at the Salzburg Festival concert toward the latter part of the film. The performance was delivered as a means of denouncing the presence of the Nazi soldiers in Austria, further solidifying the songwriters’ intentions for the tune to be represent true patriotic sentiment, passion, and courage.