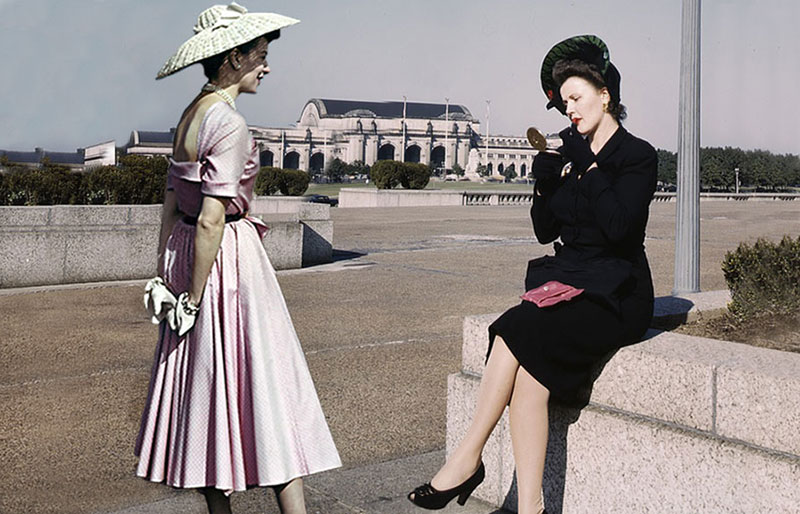 Women’s fashion has evolved throughout the years. Influenced by each decade’s political and economic state along with the creativity and adaptability of some of the world’s best designers, subtle and drastic changes were made in the fashion industry from the 1920s to the 1950s. The dominance of the industry shifted from the hands of the French and British to the North Americans, returning to the French by the mid to late 1940s with designers such as Christian Dior reclaiming the throne. Nonetheless, each played a major role in how fashion was viewed and presented to the masses.

Major alterations were observed, primarily in women’s style, as the luxurious dressing brought on by the Edwardian era include brief definition here of the fashion style was halted by the impact of World War I. A shift took place from the floor-sweeping gowns with bishop sleeves of the 1920s to the cocktail dresses with cinched waists 30 years later.

Modesty in all areas of life—fashion in particular—was held in high regard during the First World War. The intense global conflict lasted from 1914 to 1918, and as a result, formal apparel was replaced with comfortable pieces and cost-effective materials. Minimal-layered clothing was preferred and dresses became looser, hemlines resting above or just below the knee. Dubbed the La Garçonne era, outfits were influenced by androgyny to promote simplicity and confidence, a concept made famous by Coco Chanel.

High-waisted trousers and suit-inspired dresses were the way to go; pearl earrings and necklaces were the leading jewelry of choice. Makeup was also kept on the simpler side—a bold red lip would often suffice, adding feminine flair to ramp up one’s outfit.

Sportswear made its way into daily fashion as well. Derived from styles worn during activities such as golf and tennis, women flaunted shorter sleeves, pleated dresses, knickers, and outfits with patterns, including stripes and polka dots. Fancier modes of dressing were still enjoyed but reserved for evening wear with long gowns adorned by fine embroidery and sequins.

The 1920s is credited for democratizing fashion. However, the laid-back, loose-fitting tom-boy designs would soon be abandoned for the bias cut and glamorous Hollywood-inspired garments of the 1930s.

Androgynous styles had taken a step back in the 1930s. Rising to the occasion were ankle-length hemlines and silhouettes which included cinched waists, and more form-fitting pieces. It was the return of the widely accepted expression of femininity in fashion and the decade saw the celebration of new techniques and style choices that mirrored that. One such technique is the bias cut, spearheaded and made popular by renowned designer Madeleine Vionnet.

The bias cut refers to cutting on the fabric’s diagonal grain at 45 degrees as opposed to along straight lines and cross grains. The technique is beloved for its sleek, sheath-like, and alluring appearance, and was often used for evening dresses made from satin.

Prints such as florals, polka dots, stripes, and other patterns were generally donned during the daytime. Despite the playful print, the waistline was outlined to maintain an effeminate and mature appeal. The decade also saw the introduction of the women’s smart suit. One such design was described in the March 11, 1935 publication of the Evening Star as a three-piece costume suit with great distinction. These suits often featured padded shoulders and defined details.

The 1930s were also influenced by the styles of Hollywood’s finest and most fabulous actresses. Icons such as Joan Crawford and Greta Garbo are noted for inspiring women’s fashion through the big screen, helping many to cope during the effects of The Great Depression.

The world of fashion was disrupted during the 1940s and the dominance of the industry in the early years of the decade was no longer linked to the French. World War II had limited the output of designs by some of France’s best. A number of designers migrated from Paris as Germany had invaded the capital.

French fashion was now associated with utility clothing. Minimalism was the foundation on which clothing was now created. Contemporary blouses were swapped with button-up collared tops, neutral tones were prevalent, and suits became chunkier and squared, caused by a decline in the availability of cloth, leather, wool, and other raw materials.

This utilitarian style of dressing was not adopted by much of the American society, however. In the United States, sporty and stylish dresses were taking over with designers such as Claire McCardell who was carving a new path in fashion through a heavier reliance on denim, jersey, and seersucker. She introduced the trendy popover dress: a chic and versatile wrap dress made of denim.

The impact of World War II on France had allowed the United States to rise as the leader of fashion globally. Nevertheless, utilitarian apparel had lost its spark by 1947 when Christian Dior premiered his “Corolle” line; a post-war style featuring rounded shoulders, defined waistlines, and full A-line skirts. Known as the “New Look”, this design transformed women’s fashion from the simple elegant styles worn in the decades prior to more extravagant pieces, doused in femininity.

Dior’s new look would prevail well into the 1950s, crowning France as the world’s fashion hub once again.

The elegant flair of women’s fashion continued well into the 1950s with Dior’s “New Look” still leading the way. However, with new designers came variety and freedom in style. The likes of Hubert de Givenchy and Cristóbal Balenciaga placed a playful spin on the formalwear donned by the women of the decade. Conservational prints, loud fashion, and bubble skirts were revolutionizing the era.

In the meantime, Claire McCardell’s wrap dresses continued to be a hit. The American designer became the go-to for trendy sportswear designs and sundresses. She also introduced the cuffed calf-length trousers known as pedal pushers which are still in style today.

The love for lavish fashion had returned following the Second World War. Luxurious outfits with matching accessories, and perfectly applied makeup were the standard. This style of dressing would further evolve in the 1960s, leading lead to the bright and bold get-ups that characterized the decade.