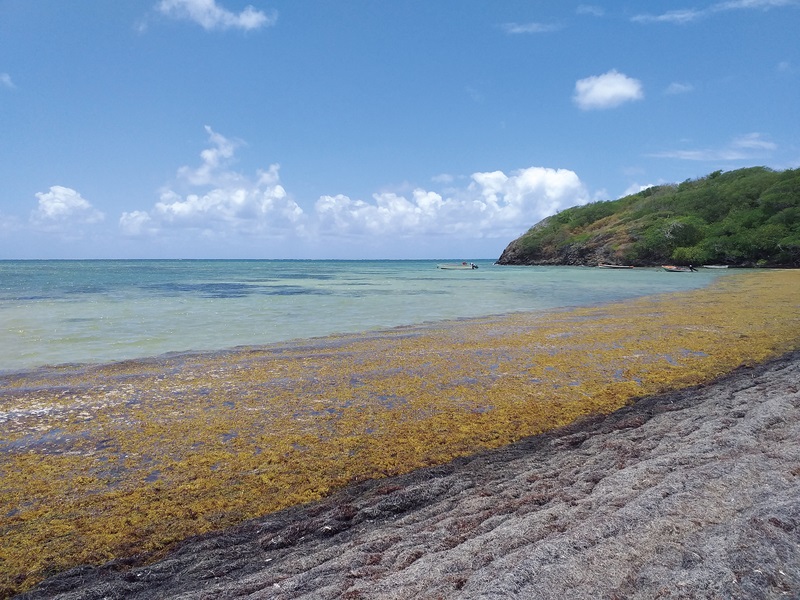 Caribbean coasts have been buried under a “golden tide” of sargassum seaweed. The tourism industry has been choked with the release of dangerous gases and the death of different animals.

In June of 2022, over 24 million loads of this seaweed smothered the Atlantic, based on a report published by the Optical Oceanography Lab at the University of South Florida. This is the highest amount recorded in history.

According to Chuanmin Hu, a professor of optical oceanography, the number of brown algae did not decrease in July.

More research is to be conducted to determine why the high levels of sargassum seaweeds are high. The likely causes are sewage waste, nitrogen-rich fertilizers, and increased water temperatures brought on by climate change. Seaweed in tons has a devastating impact on the environment. When algae decay, the temperature of the water changes, and the pH balance is altered, resulting in a reduced number of coral reefs, seagrass, and sponges.

Not just plant life but humans too. The rotten clumps of seaweed can cause increased levels of hydrogen sulfide in the atmosphere worsening respiratory problems like asthma. The high concentration of seaweed is raising health concerns in the eastern Caribbean.

The U.S. Virgin Islands raised concerns over the high levels of algae last month that has affected the production of water at a desalination plant; hence, it has been declared a federal emergency by the Biden administration.

The station that generates electricity in the U.S. Virgin Islands depends on the water produced from the desalination plant cutting down emissions. The water lost would cause the government to use expensive and scarce diesel.

Scientists believe that significant levels of sargassum were initially detected in the Caribbean Sea in 2011, caused by stronger currents and winds. The issue has worsened because clumps have grown more numerous, fed by nutrients and bright sunlight.

In moderate amounts, seaweed aids in water purification, absorb carbon dioxide, and serves as a vital environment for fish, shrimps, turtles, and other animals. However, a large amount that builds up on the beaches harms the environment and the economy.

The mysterious deaths of large numbers of fish in the French Caribbean island of Martinique were attributed to the overpopulation of seaweed. Activists are especially worried about the fate of rare species of turtles, some of which drown at sea after becoming trapped in seaweed or are prevented from laying eggs because of the blanket of seaweed coating the sands.

Authorities in the Cayman Islands started a program in which employees pulled over 268 square meters of algae from the ocean because of a heavy seaweed blanket. However, the authorities declared that cleanup activities had been put on hold due to the extent of decomposition.

Some island nations have chosen to utilize large machines for clearing the beaches of sargassum. Still, experts caution that this causes erosion and may wipe out rare turtles’ nests.

Sargassum is still being tried as food, fuel fertilizer, and building material. Still, much progress has not been made because the Caribbean islands have few resources.

With the federal emergency declared, the governor of UMS. Virgin Islands, Gov. Albert Bryan, seeks local finds for mass cleanup of the beaches. However, there is a huge concern that the situation may become the new normal.