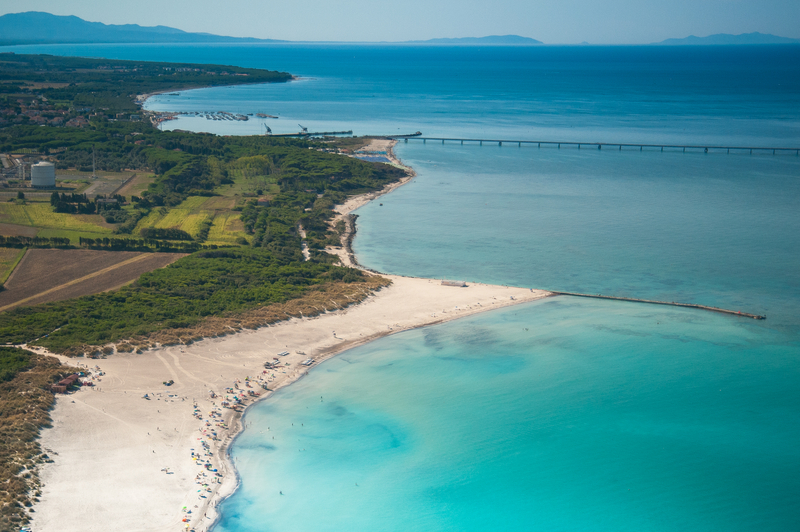 Tuscany is a splendid region, rich in history and culture, and graced with beautiful landscapes. The Tuscan coast and its immediate hinterland, consisting of the provinces of Massa-Carrara, Lucca, Pisa, Livorno and Grosseto, together with the islands of the Tuscan Archipelago, is a unique and fascinating area.

The sea and beaches, cliffs and pinewoods, parks and protected areas, and historic cities and ancient villages are the salient features of this part of Tuscany. The wine. routes crossing it, its varied and delicious cuisine, and the traditions and folklore that are also evident in the festi­ vals taking place here, make it even more attractive.

Despite the apparent homogeneity of the Tuscan coast, it is, in fact, very diversified and, thanks to its mild climate, may be visited at all times of the year, making it an outstanding area for tourism.

There are places that allow themselves to be discovered little by little, almost as if they were reluctant to reveal their hidden treasures to the hasty tourist. This is not the case with the Maremma, a well-known land that immediately dazzles the visitor with its colours, landscape, art, history and traditions.The Maremma and its inhabitants are much more demanding on their guests: they want to be accepted and liked for what they are. This area has a long history, beginning with the Etruscans and then continuing over the centuries with invasions, conquests and the building of fortifications. The variegated forms of the coastal landscape and the gently roI­ ling hills of the interior have been modelled by the ingenuity and toil of generations of peasants, labourers, cowherds, wood men, quarrymen and miners. The towns, like Marina di Grosseto, villages and isolated hamlets dotting the area have a rich heritage of works of art and handicrafts. Even the hearty local cuisine seems to be immune from fashions and easy compromise. But, above all, it’s the character of the people that marks the Maremma off from the rest of Tuscany: it’s an area that in the past had a reputation for being rough yet courteous, difficult but not hostile. Then as now, it’s a land of sharp contrasts where, for the visitor, everything is fascinating.

Few areas in Italy have such a large number of protected areas as does the province of Grosseto. They include the old-established Parco naturale della Maremma, the recent Parco naturale dell’Arcipelago Toscano, thir­ teen nature reserves and eight others concerned with, for example, repopulation and biogenesis, as well as the WWF nature sanctuaries. Altogether they cover 40,000 hectares, constituting a vast nature reserve contai­ ning all the typical habitats of the coastal strip and the interior, right up to the top of Monte Amiata.

Men, animals, plants: the balance between these elements indicates that by and large, in the wide coastal strip between the promontory of Piombino and the Colline Metallifere to the north and the promontory of the Argentario and the hills of Orbetello to the south, nature still reigns supreme.

A clear sea washes a long, varied coastline comprising sun-drenched sandy beaches, isolated coves and sand bars alternating with high, rocky stretches from which there are magnificent views of the islands of the Tuscan Archipelago. The bay of Cala Violina, rightly considered to be one of the finest and cleanest expanses of sea in Italy, the long beach of Punta Ala and Castiglione della Pescaia, Marina di Grosseto and Marina of Alberese, Talamone, the sand dunes of Orbetello and the Argentario, Ansedonia and the coast near Capalbio: these are names of places familiar to those seeking a coast that, with the variety of its landscape, is never dull or predictable,

Long stretches of this varied coast are mantled with the bright green of the dense pinewoods screening off the sun-baked countryside of the interior. The trees growing almost at the water’s edge at Punta Ala are followed by the extensive pinewoods between Castiglione della Pescaia, Marina di Grosseto and Principina a Mare. Finally, in this part of the coast, which is one of the most intact in Italy, there are still vast areas of wetlands, now protected for the numerous species of migrant birds and plant associations that still form part of a unique, unspoilt natural environment. [1]

The Maremma is bordered by a transparent sea along its long and multicolored coastline of sunny beaches and rocky cliffs. The clear water of the Maremma coast holds first place as the cleanest in Italy. The 160 km of splendid coastline offer endless possibilities for enjoyment. High cliffs alternate with small isolated coves. Long stretches of sandy beaches providing all comforts are protected by lush pine forests.

The Maremma seashore, overlooking the Tirrenian Sea, features some of the most beautiful sand beaches of Tuscany. The Maremma’s most famous bathing sites combine natural beauty and trendy centres. They stretch from Principina a Mare and Marina di Grosseto through Castiglione della Pescaia to Punta Ala and the blue sweep of the Gulf of Follonica, and afterwards along the spectacular etruscan coast, the Costa degli Etruschi up to Piombino.

In the south they spread from the Ombrone delta into the wildest tiny gulfs within the Regional Park of Maremma.

Some of these beaches are quite isolated and wonderful, from a natural viewpoint. They are very often embellished by sand dunes, behind which evergreen bushes lead the way to a flourishing and thick pine forest. This type of wood is very closely tied to the history of this land with its past of drainages.

There are a number of charming beaches along the Maremma coastline: one, a long sandy stretch from Castiglione della Pescaia to Marina di Grossetto, can be virtually deserted in the middle of August. A short way south of Marina di Grosseto, the Marina di Alberese beach, at the end of a long track which virtually drops you in the Mediterranean, is busier but good for families, and has shade in an extensive area of woodland behind the beach – also a fun place to mountain bike.

Near the northern the border of the Natural Reserve of the Maremma in the Uccellina hills, Principina a Mare is less than one hour by car away from Casa Santa Pia.
At Principina a Mare, we arrive there in less than 50 minutes, going on the Trappola road, which takes the name from a thirteenth century tower, from which top we can enjoy wonderful views of the sea and Uccellina Mountains. The road, on one side runs along three loops of the river Ombrone and on the other one runs along fertile fields hardly pulled up from the marsh some time ago. So soon we come to a thick wood: it’s the pine-wood of Principina, a wonderful forest of wild and domesticated pine-trees, now centenarian, with a thick underwood. After having reached the holding La Trappola, if we turn left through a cart-road, we can reach the mounth of the Ombrone river, where the lack of vegetation, the action of the sea and that of the river, suitably joint, build a land in continuous evolution.

Farther on, northwards, spreads out the built-up area of Principina.

Marina di Grosseto is a frazione of Grosseto, and is renowned for the Mediterranean maquis shrubland of the Maremma and for its wide beaches on the Tyrrhenian Sea.
It houses a fort, known as Forte di San Rocco, built by the Grand Dukes of Tuscany in the 18th century.

The San Felice Oasis consists essentially of four different habitats (five, if you include the public beach), in part completely natural, in part shaped by centuries of labour, especially with the reclamation works initiated in the 19th century by the Lorraine grand dukes of Tuscany.

To begin with, the pinewood, dating back almost two centuries when the trees were planted, now the impressive green enclosure of the Oasis; the luxuriant underbrush of Mediterranean shrubs that proliferate thanks to the protection afforded by the dense pinewood; then the dunes, whose characteristic expanses of grasses and bushes create an intriguingly wild atmosphere; finally, the Fiumara canal, another manmade environment, whose lake habitat is much favoured by the aquatic bird species.

Diaccia Botrona Marshland is the last relic of a once large Etruscan and Roman lake – lago Prile – that lay between Grosseto and Castiglione della Pescaia. Long coastal dunes, the tombolo separate the marshland from the Tyrrhenian Sea.

Diaccia Botrona is of great environmental importance, both for the variety of plant species, both for the role it plays in supporting the migration and wintering birds. Represent what remains of a wider area marshy, affected by an artificial water system, carried out at different times, for the remediation of a good part of the plain between Castiglione and Grosseto. Of interest is the geological formation of Macigno in outcropping along the road is the second Panoramica. The Emblem of padule and its bonifica is the Casa rossa, was built in the eighteenth century by Leonardo Ximenes, head of the works for the remediation from Grand Leopoldo, to flow water through a complex system of cataracts, and marginally was also used for catching eels.

The marshland is a site of great environmental importance. Inside the Park one can admire admire white herons, red herons, ducks, the falcon of the marshes and the Cavaliere d’Italia.

There is a visitors centre within the Riserva Naturale Provinciale Diaccia Botrona and guided boat tours are available through the marshes. Entrance is free.

Castiglione della Pescaia is a famous and popular seaside resort town known for its sandy beaches and Tombolo pine forest.
Castiglione della Pescaia, a delightful village of Roman origin, has developed on the summit of Mount Petriccio within mighty walls with 11 towers and 3 portals and the Castle XV, that keep intact their charm, such as small streets of stone, the ancient portals and arches that susseguono. The country is an ancient fishing village (hence the name) and the port-channel every night pull up boats fishing with their cargo.

On Saturday morning there is a market in Castiglione della Pescaia.

The large and accessible sandy shore of the Gulf of Follonica includes coves such as Cala Martina and Cala Violina as well as the furnished beaches of Castiglione della Pescaia and Marina di Grosseto.