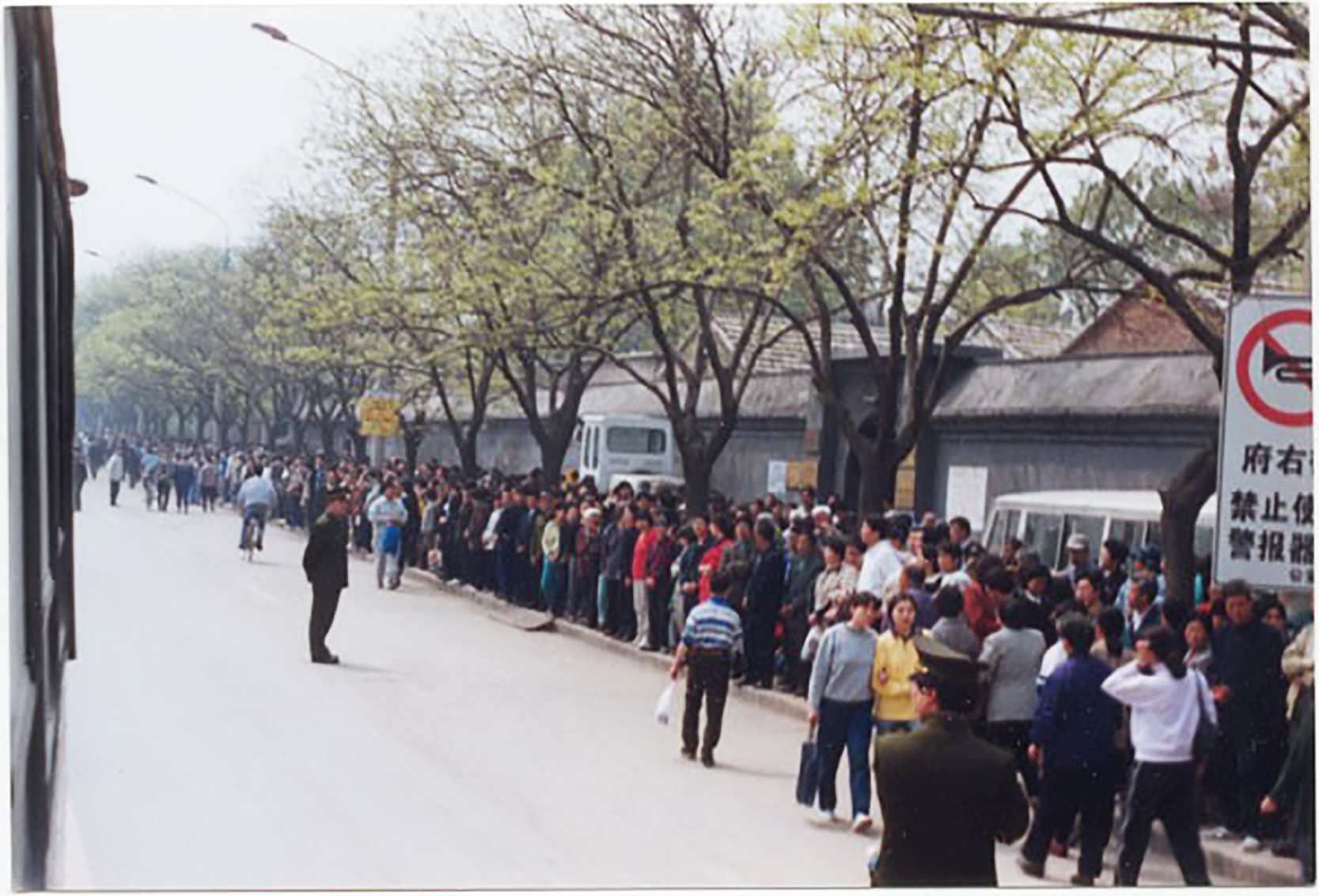 Beijing, China - April 25, 1999: Without any political guidance, practitioners started to travel to Beijing and tried to engage with the central government to solve the issue. When they arrived, they stood along the street. Some were meditating, some were reading, and some were trying to exchange ideas between each other.
By Lillian Zheng, Bethany Shepard April 25, 2022 3:30 am PST
Facebook
Twitter
SHARE
Facebook
Twitter

There have been many special dates and holidays celebrated over thousands of years. In our modern times, people are commemorating more and more dates to mark new holidays and significant events. Yet, one day is still lesser-known but is being gradually recognized, is April 25th.

On April 25, 1999, a remarkable event unfolded in the East, called the “Zhongnanhai Appeal. ” On this day, a group of 10,000 Chinese Qi Gong meditators, Falun Gong practitioners, traveled from different parts of China, and peacefully gathered at the Zhongnanhai in Beijing, the heart of the Chinese Communist party’s complex, to express their opposition to the Party’s suppression of Falun Gong. It marked the first time that ordinary, non-political Chinese citizens traveled to Zhongnanhai to express their personal point of view to the Chinese Communist Central government.

April 25th, 1999, was a watershed moment in contemporary Chinese history. This was China’s largest spontaneous gathering since the 1989 Tiananmen Square student uprising, but those Falun Gong practitioners had no political agenda, slogans or support from other organizations. That made this event even more significant, as it came from ordinary Chinese citizens with a simple request.

As a well-recognized Qi Gong practice at the time, Falun Gong’s health benefits had drawn over 100 million Chinese citizens to practice the exercise across China. It was once a common scene in various local parks where people practice Falun Gong or other types of Qi Gong exercises to keep fit. Its founder, Li Hongzhi, refined the ancient meditation practice system to improve people’s health amidst the busy modern life style. The exercises combine simple meditation movements with a calling to higher moral discipline.

The effective Falun Gong system soon spread quickly through word of mouth among friends and families, and Li Hongzhi became a popular Qi Gong Master in China. However, its popularity sparked the government’s hostile attention, due to China’s zero-tolerance attitude on different voices, the former Chinese Communist Party’s party leader, Jiang Zeming was enraged by the growing popularity of Falun Gong’s founder. Jiang’s infamous jealousy was oddly triggered by a number of Falun Gong practitioners.

Jiang planned a crackdown on Falun Gong, the first media campaign launched in Tianjin, a satellite city of Beijing, where the local media fabricated the stories and labeled the group as an evil cult. Upon learning of the crackdown, some practitioners went to the media office and tried to explain the true benefits of Falun Gong, but they ended up getting beaten and abused. As practitioners were trying to resolve the tension, the Chinese Communist Party began to launch a nationwide persecution against them.

Without any political guidance, practitioners began to travel to Beijing and tried to engage with the central government to resolve the issue. When they arrived, they stood along the streets. Some were meditating, some were reading, and some were trying to exchange ideas between each another. After a few representatives were sent inside the government compound to negotiate, the rest of them were quietly waiting outside. Although, they came from different social backgrounds and places, their orderly manner has even impressed capital police.

The demonstration had a huge effect though, with shockwaves felt across the nation. The demonstrations scared the Chinese Communist Party’s superman, Jiang Zemin, who had been seen in his black vehicle, hidden behind tinted windows passing the group outside of his headquarters. The next night, he sent a letter to the Politburo in which he said that Marxists must combat over Falun Gong.

April 25th marked the beginning of the Communist’s war on the ground of its own land and people in the 21st century. The brutalization of the Chinese Communist Party’s most scoundrel authoritarian political system has throughout modern history killed more than 80 million Chinese people to suppress Chinese people’s free will and individual voices since its establishment in 1949.

However, this time, the Chinese Communist Party’s killing machine encountered the most powerful and enduring resistance since its debut, when, on April 25th, 1999, Falun Gong practitioners of all walks of life stood in front of their central governmental compound and calmly declared their rights to practice.

Again, this new round of brutalization led to millions of tortures, deaths, and social destruction in China. Despite the risk of persecution, Falun Gong continues to retain a global presence and refuses to relinquish their identity. The practice has been translated into 60 languages, and is freely exercised by different ethnic groups. Every year, on the 25th of April, Falun Gong practitioners would hold peaceful demonstrations worldwide to commomerate this special day.

April 25th’s Zhongnanhai peaceful appeal was the catalyst for the beginning of one of the most powerful movements against a repressive regime in our modern history, the start of fundamental awakening among Chinese people.