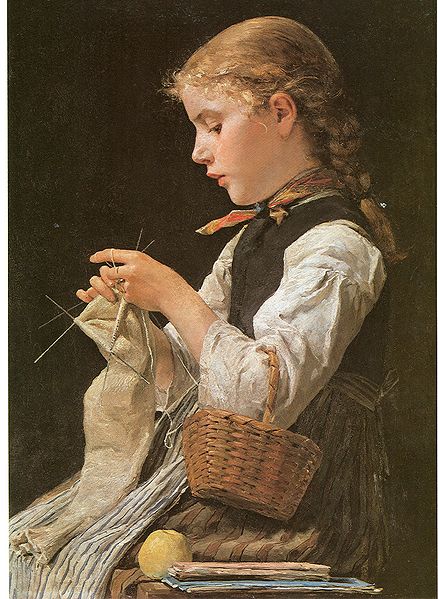 Albert Anker is as Swiss as Norman Rockwell is American. His reproductions works are  everywhere—in schoolbooks, on candy boxes, calenders, postage stamps. Hotel walls often have or used to have an Anker reproduction in the rooms or around the reception desk.

But most of the rest of the world have never heard of him or seen even one of his paintings. The Swiss have done little to change this. They fondle him like a mother and don’t mind if he stays at home with her. But they smile and begin to purr if you show an interest in him. They think the things he paints are their own family affairs; the paintings themselves, old family snapshots.

Anker lived in the nineteenth-century (1831–1910).  Switzerland wasn’t the rich country we know now. It was poor. The mountain people had very hard lives. The cantons fought over religion.  Anker’s father wanted his son to study theology but the boy had a painter’s vocation. “Art seemed to me a forbidden paradise,” he said, looking back. While attending a German university he couldn’t keep his eyes off the great paintings he saw in collections and he finally persuaded his dad to let him off the theology hook and become an artist.

He went straight to Paris and found a painting teacher (Charles Gleyre).  There he saw what was brewing in the painting world: Monet, Cezanne, Toulouse-Lautrec were changing the focus of art and even the representation of everything; but he went on doing his own thing. He painted the people back home.

He sent his works to shows in Paris and Switzerland and was immediately successful. Galleries that refused to show the new geniuses gladly invited Anker to exhibit his work.

From then on, he painted and painted and lived happily ever after. In winter he lived in Paris and in summer, in Switzerland, in his grandfather’s big house in Ins, near Bern.  He was loved and respected. There were all kinds of prizes: gold medals, Legion of Honor, even a doctorate from the University of Bern. He married and had six kids.

This painting won him a gold medal at the Paris Salon in 1865. He loved to watch and to paint children.

Here is a sick girl playing with her dolls. Notice the great details such as that knitted sweater, the looks of attention of the two children, the turn of the girl’s hand as she sits the doll in its little sofa.

Here are children having breakfast:

Anker had liberal views on education and painted many pictures showing the packed old schoolrooms and orphanages of his time.

He loads his paintings with fine details of objects and dress.  But it is his depiction of behavior which everywhere makes you smile or nod. The children in a picture like this are each a study of some familiar human trait or conduct. No wonder the Swiss love him.

But his deepest paintings are about the aged. This one of the sick old man in thought while his grandson reads the Bible is as good as painting gets. It goes far beyond mere decoration or easy sentimentality.

See also  The Notary and The Fortune-Teller.