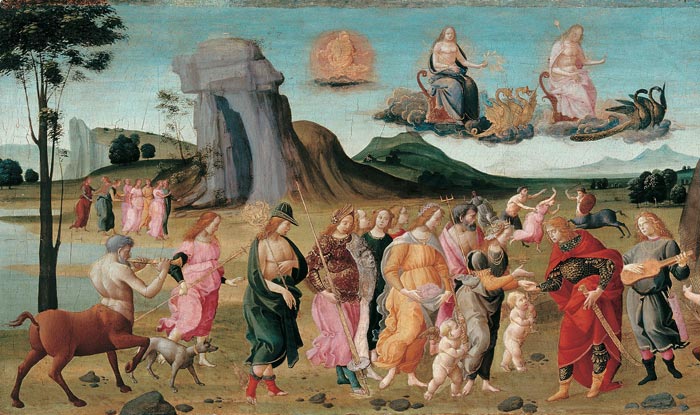 Bartolomeo di Giovanni, also known as Alunno di Domenico, was an early renaissance Italian painter of the Florentine School who was active from about 1480 until his death in 1501. He studied with and assisted Domenico Ghirlandaio, painting the predella of Ghirlandaio’s Adoration of the Magi in the Ospedale degli Innocenti (Foundling Hospital) in Florence, in 1488. Bartolomeo di Giovanni also worked under the guidance of Sandro Botticelli.

This name Alunno di Domenico (‘pupil of Domenico’) was invented by Bernard Berenson for the Florentine painter to whom he ascribed most of the designs for Florentine woodcut book-illustrations of the late 15th century. This wholesale attribution has not won general acceptance, but the actual pupil and assistant of Domenico Ghirlandaio postulated by Berenson has been identified as Bartolomeo di Giovanni, who was commissioned to paint the predella of Ghirlandaio’s Adoration of the Magi in the Spedale degli Innocenti (Foundling Hospital) in Florence, in 1488. He was most important and talented artist in Ghirlandaio’s workshop, who had made an individual and pleasing impression in the fresco of the Sistine Chapel. He has an intense, almost biting Nordic style, and he anticipates the rapid and nervous manner of Piero di Cosimo. He also worked under Botticelli’s guidance.

The two panels The wedding of Thetis and Peleus and The Procession of Thetis, illustrating colourful festivities at the wedding of Peleus and Thetis, a popular mythological subject of love triumphing in the face of difficult circumstances, are displayed at the Musée du Louvre in Paris. [1]

The Wedding of Thetis and Peleus

The wedding of Thetis and Peleus shows gods, goddesses, nymphs and others processing to the house of the hero Peleus to celebrate his wedding to the beautiful sea-nymph Thetis. Thetis had many suitors, including several of the gods themselves, but when they learned of a prophecy that the son of Thetis would be greater than his father, the gods arranged that she should marry Peleus. Their son was to be Achilles, the greatest of the Greeks to fight at Troy. The wedding of Thetis and Peleus probably adorned the front of a bridal chest, one of a pair. Its pendant was decorated with the Procession of Thetis.

The Procession of Thetis

[1] Cassoni (singular cassone) is the name given to Italian Renaissance painted chests on panels. In fifteenth-century Italy pairs of cassoni were often commissioned at the time of marriage. Cassoni were made throughout Italy. However, they were particularly associated with Tuscany and Florence. Painted chests were sometimes part of the procession which a bride made from her father’s house to her new home with her husband and his family. They would contain her trousseau (dowry).