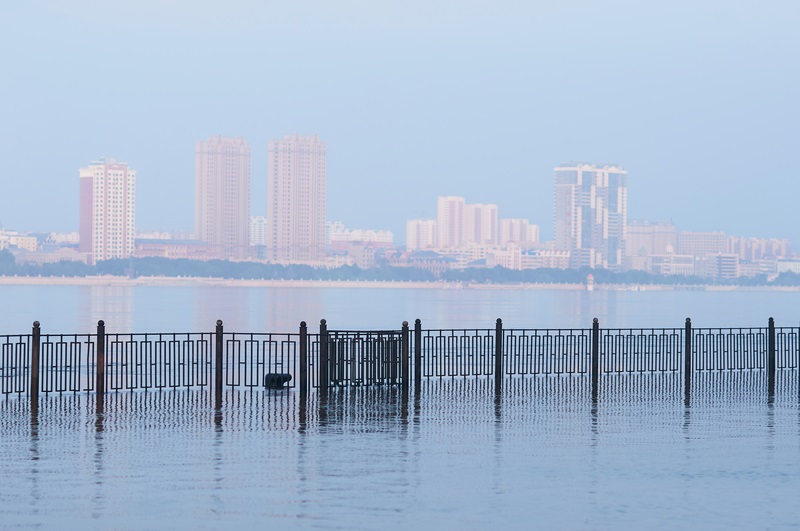 Flooding on the Amur river on a foggy morning. Boardwalk fencing. In the haze, the neighboring city of Heihe, China. View from the city of Blagoveshchensk, Russia. Summer 2021 (Photo © Aleksei Ignatov | Dreamstime.com )
By Andrea Murray August 21, 2022 10:42 am PST
Facebook
Twitter
SHARE
Facebook
Twitter

Due to torrential rains and flash flooding in North China in the past week (Aug. 7 to Aug. 13), many citizens are negatively impacted as they navigate the harsh conditions.

Areas within North China were flooded as a result of the excessive rain. The intense downpour unsettled the residents of Zhongyang County as entire buildings, roads, and crops were destroyed. The rising tide also carried away cars. Many stores were flooded and essential items were destroyed. Five construction workers were also reported missing during the flooding. As of now, it has been reported that 4 people have died in the flooding and 9 have been injured.

According to a report from Chinese state broadcaster CCTV, the storm began last Wednesday (Aug. 11) at 10 am and lasted until 11 am the next morning. This is considered the heaviest rainfall the region has seen so far for the year, as waters continue to rise above 3 feet.

Residents in the area say it will take them days to clean up all the mud and sand that came into their homes due to the heavy flooding.

It was also reported that restoration efforts are moving quickly after the flooding, according to, the director of Zhongyang County Emergency Management Bureau. However, Zhongyang County may only continue to have severe rainfall this week, according to weather department authorities. Citizens of the area have been urged to exercise caution. Landslides could still occur in various locations, according to the meteorological department.

The South China Morning Post reported that in June 2022 severe floods in southern China forced more than 500,000 people to flee their homes and resulted in projected economic losses of USD 250 million. While some parts of China are facing flooding problems, other areas are facing heat problems. During a heatwave in July, many cities, including Shanghai, recorded their hottest days ever.

According to scientists, climate change has increased the frequency and intensity of extreme weather events around the world, and as global temperatures rise, this trend is likely to continue.

Climate change has made the situation in China more extreme. There has been a noticeable increase in natural disasters in 2022. The Washington Post reported that according to Li Shuo, a policy adviser at Greenpeace East Asia, public concern about climate change will eventually become a significant motivator of Chinese climate action, much like it was with air pollution ten years ago.

Rainfall in southern China between March and June of this year surpassed the greatest amounts ever recorded to date. At the same time, Henan province had a record-high demand for electricity to operate air conditioning due to a heat wave in northern China that raised temperatures above 40 degrees Celsius.

While floods, heat waves and dust storms have always been a part of China’s springs and summers, the higher frequency and severity of these natural phenomena are more and more linked to changing global weather.

The Washington Post also noted that The Ministry of Ecology and Environment initiated a multi-departmental effort to create a national climate change adaptation strategy last month in response to the growing threat of climate-related extreme weather events. The strategy is expected to be completed by 2035.