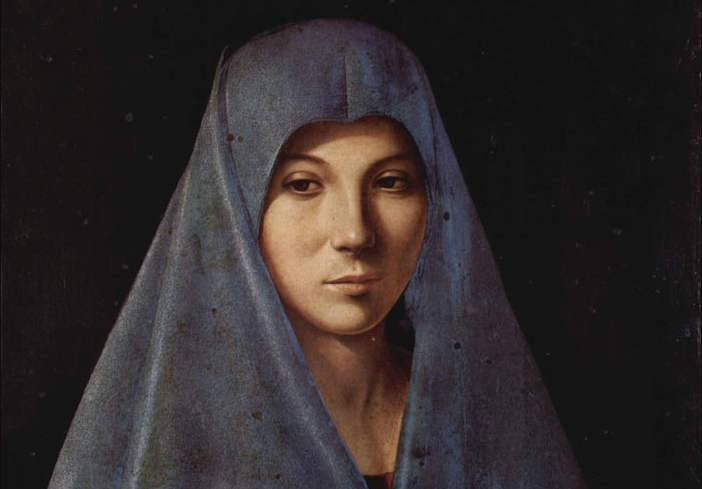 "The Annunciation" is probably the most famous work of the Sicilian painter, fascinating and surprising with its clever light source arrangement, which produces the interaction of backlight. But what is truly innovative is the interpretation of the Annunciation of the Virgin of Palermo, breaking the traditional composition of the Annunciation scene. Antonello condenses the sacred event into a single image of the Virgin, emphasizing the psychological impact of the event on the contemplative and realistic image of the Virgin.
By Staff Reporter June 25, 2021 12:11 am PST
Facebook
Twitter
SHARE
Facebook
Twitter

The Virgin Annunciate is perhaps the most famous of the Sicilian painter’s works and is one of the art icons of all time, dating back to Antonello’s stay in Venice. The former enchants and surprises in its masterly orchestration of light sources, generating an interplay of backlight and, at the same time, wholly unifying the composition. But what is truly innovative is the interpretation of the Virgin Annunciate from Palermo, in which the painter achieves absolutely modern results, breaking up the traditional composition of the Annunciation scene. Here, indeed, Antonello condenses the sacred event into the single figure of the Virgin and concentrates on the personal and intimist aspect of the scene, underlining the psychological effects of the event revealed to the pensive and realistic figure of the Virgin and making the viewer feel, due to the absence of the angel, that he is the sole witness to the sacred event.

The Virgin Annunciate was created for a domestic interior. It is a haunting image of the adolescent Mary when the angel Gabriel announces to her that she will bear God’s Son. The modest Sicilian female, attired in a simple blue mantle, is aloof and mysterious. She is shown bust-length and against a plain background. Mary looks up from behind a reading desk upon which her book of devotions rests. Her direct outward gaze and right hand raised in a blessing gesture engage the viewer, who replaces Gabriel as the provider of the miraculous news and becomes an active participant in the charming painting’s story. The lack of a pendant or adjoining panel suggests that the angel’s presence is implied.

Noteworthy in The Virgin Annunciate is Antonello’s use of light to build convincing forms. To paint Mary’s foreshortened right hand, he may have employed a velo, a stringed grid through which an artist observed objects and then recorded their contours onto a squared piece of paper.

The panel is a compelling depiction of Mary with an open devotional text on a simply rendered geometric lectern. She acknowledges the implied presence of the angel Gabriel, who is about to tell her that she will be the mother of the Son of God. In response to the angel’s greeting, Mary clasps her blue cloak closed and holds it modestly in front of her chest. Meanwhile she gestures outwardly with her right hand extending beyond the picture plane’s surface to Gabriel, who occupies the viewer’s space. Some art historians feel that the foreshortened quality of the Virgin’s right hand was achieved through the use of a velo (a string grid through which shapes were observed, drawn onto a squared piece of paper and then transferred to a painting). Although the subject is religious in nature, Antonello consciously chose a young and humble Sicilian girl for the model of the Blessed Virgin. In this way, he took a theme from the remote Biblical past and made it spiritually relevant, if not awe-inspiring, to anyone who saw the painting.

Antonello da Messina is one of the most pioneering and influential painters in quattrocento. Antonello di Giovanni d’Antonio was born in the seaport city of Messina, Sicily, around 1430. His formation took place in Naples during the reign of Alfonso of Aragon, in the brilliant artistic atmosphere of French and Dutch painting. Antonello absorbed these influences to the point that many of his modern people believed that he was the first to introduce oil painting in Italy-which has become popular in the north. The 16th-century writer Vasari described the life of Antonello da Messina as a story of borrowing and conversion, which is the origin myth of oil painting. The legendary inventor of oil paint is Jan van Eyck. According to Vasari, he is an alchemist and artist who discovered it after years of mysterious experiments. Despite the unique smell of his paintings, he managed to preserve his findings. Then Antonello, “a smart, lively, and extremely clever man”, happened to go to Naples and saw a painting by Van Eyck owned by King Alfonso. Antonello was so shocked that he gave up everything to go to Bruges, where he fascinated the elderly Van Eyck with gifts until he shared the secret.

Antonello established his studio in Venice, a city suitable for his enjoyment. His trip to Venice in 1475 was a landmark moment, where he redesigned the art of Giovanni Bellini and other Venetian painters for the church of San Cassiano there (now a fragmentary form of the Kunsthistorisches Museum in Vienna). His portrait marks a new stage in the evolution of the genre in Italy. Antonello’s portraits, including his portrait of a mysterious figure in the Cefalu Mandela Liska Museum in Sicily (1465), transformed his image from Flemish art to Italian art. There were no greater artists in southern Italy in the 15th century.

“The Annunciation” is probably the most famous work of the Sicilian painter and one of the artistic icons of all time. Its history can be traced back to Antonello’s stay in Venice. The former is fascinating and surprising with its clever light source arrangement, which produces the interaction of the backlight, while completely unifying the composition. But what is truly innovative is the interpretation of the Annunciation of the Virgin of Palermo, in which the painter achieves an absolutely modern effect, breaking the traditional composition of the Annunciation scene. Indeed, here, Antonello condenses the sacred event into a single image of the Virgin, focusing on the personal and private aspects of the scene, emphasizing the psychological impact of the event on the contemplative and realistic image of the Virgin, and letting the audience feel, Because of the angel’s absence, he is the only witness of the sacred event.

The Christ at the Column from the Louvre constitutes the pinnacle of Antonello’s explorations of this theme. The bold and highly original iconographic scheme conveys the sufferings of the martyred Christ in extreme close-up. Christ at the Column was intended for private devotion. The picture was painted late in Antonello’s career-but whether in Venice or Sicily is not known.