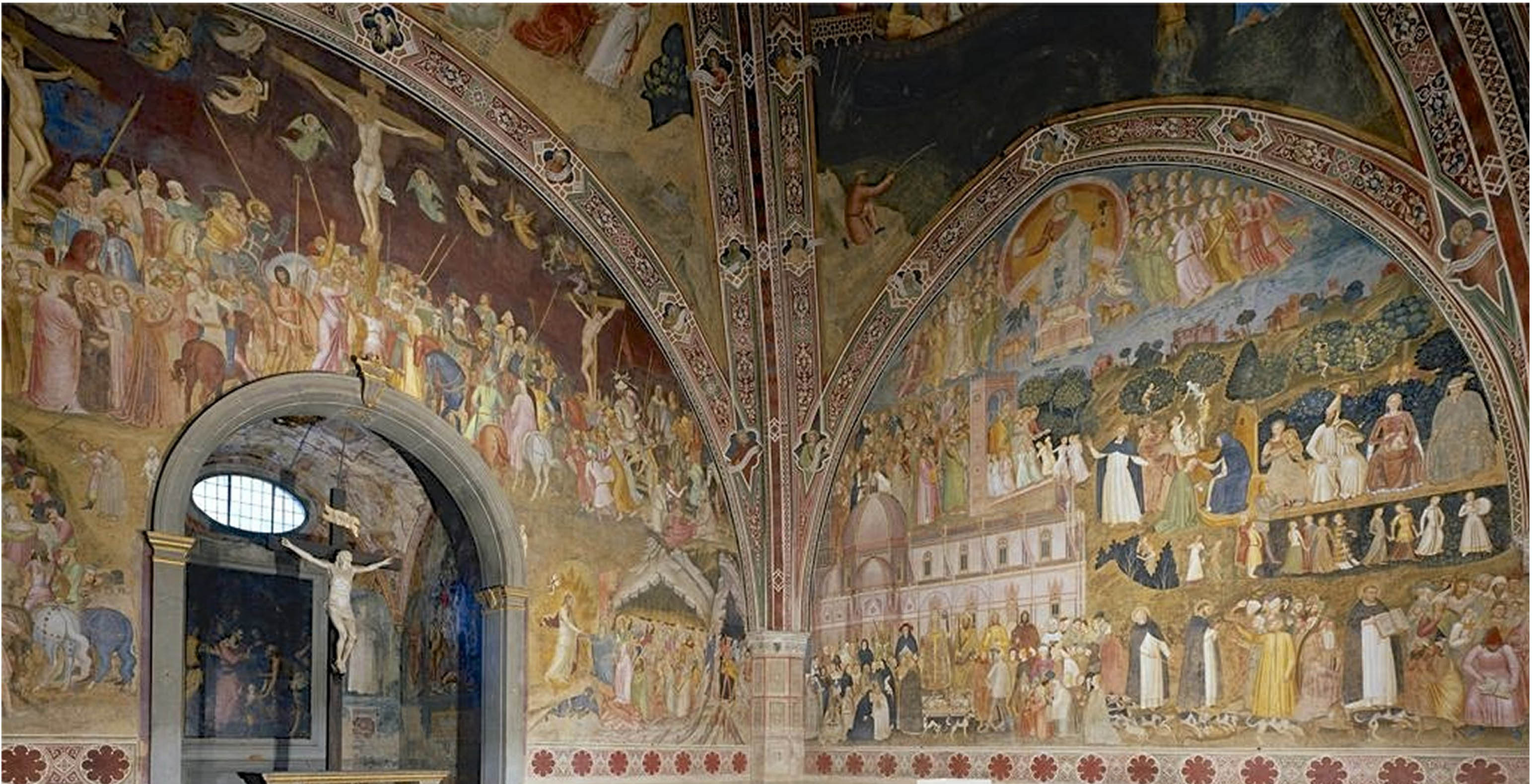 Way of Salvation, 1365-68, fresco by Andrea di Bonaiuto. This fresco covers the Southern wall of the Spaniards' Chapel of the Dominican Cloister connected to the beautiful Gothic church. This rather rigid composition depicts a carefully constructed theological program where the ratio of the figures is determined by their theological significance.
By Staff Reporter June 2, 2021 12:41 am PST
Facebook
Twitter
SHARE
Facebook
Twitter

Andrea da Firenze, also known as Andrea Bonaiuti, was a Florentine fresco painter whose considerable ability is demonstrated by his works in the church of Santa Maria Novella in Florence.

Also attributed to him are the decorations in the Spanish chapel and the cartoon (full-scale drawing) for the stained-glass window of the facade. Although he was acquainted with Giotto’s innovations in modelling and spatial depth, he was strongly influenced by the linear, hieratic art of his Florentine contemporary Andrea Orcagna, and most of his works display the rigid compositions and immobile faces associated with the Byzantine tradition.

From January 1346 he was registered in the Arte dei Medici e Speziali in Florence. The earliest paintings that can be attributed to him suggest that he must have formed a close association with the workshop of Andrea di Cione. The small portable triptych of the Virgin and Child with Saints and Angels (centre panel, Copenhagen, Statens Museum for Kunst; side panels of the Nativity and the Crucifixion, Houston, Museum of Fine Arts) shows the influence of Maso di Banco and of the painter of the Strozzi Chapel frescoes in the Chiostrino dei Morti, Santa Maria Novella, Florence.

At the end of 1365 Andrea Bonaiuti was commissioned to decorate the chapter house of the church of Santa Maria Novella. This is a church of the Dominican Order, and the frescoes, illustrating the Triumph of the Faith and the Dominican doctrine, in both their severity and their meticulous detail, accorded with the expository style of the Dominican preaching friars.

Andrea is last recorded in 1377 working on frescoes of the Life of St Raynerius in the Campo Santo at Pisa. Because almost none of his other works survive, Andrea’s murals in the chapter house of Santa Maria Novella, commonly referred to as the Spanish Chapel, stand as his greatest paintings. This cycle — probably based on ideas expressed by Fra Jacopo Passavanti of Santa Maria Novella — celebrates the spiritual and intellectual achievements of the founder of the Dominican Order and his disciples.

The central image, on the north wall facing the entrance, depicts scenes from the passion of Christ. The Way to Calvary, Crucifixion, and Harrowing of Hell are placed in a continuous frieze running from one end of the lunette wall to the other. Flanking this space on the west wall is an image of Thomas Aquinas, enthroned, presiding over allegorical representations of the cardinal virtues and the liberal arts. The Via Veritatis decorates the east wall, with Dominic, Thomas, and Peter Martyr converting heretics, providing spiritual guidance to the devout, and leading the faithful into heaven. An architectural portrait of the cathedral of Florence, complete with an envisioned octagonal dome (the actual dome had yet to be constructed), serves as a backdrop to this scene; it may have been a result of Andrea’s membership on the committee planning the dome. Scenes of the Navicella, Resurrection, Ascension, and Pentecost occupy the vaults above, providing theological analogies to the images below.

The Spanish Chapel (or Cappellone degli Spagnoli) | Way of Salvation

This fresco covers the Southern wall of the Spaniards’ Chapel of the Dominican Cloister connected to the beautiful Gothic church. The other walls were also painted by Andrea with frescoes devoted to the glory of the Dominicans.

In the foreground, in front of the side wall of the Cathedral of Florence, we can see the hierarchic order of the medieval society: the Pope, at his left the Emperor and King, a prince, at his right the Dominican general and a bishop. Before them are the friars at the left and laymen at the right; then noblemen and knights, merchant, scholar, finally women and the lower ranks of the society. The basilica in the background is the symbol of the Church. On the right side of the picture St Dominic is preaching, St Thomas Aquino debating the heretics, Martyr St. Peter signalling the dogs (symbolizing the Dominican friars, “Domini canes”) to tear the heretics to pieces. Above these scenes there is the happy world of music and dance.

This rather rigid composition depicts a carefully constructed theological program where the ratio of the figures is determined by their theological significance.

Christ Bearing the Cross to Calvary, Crucifixion and Descent of Christ to Limbo

This is the wall opposite to the entrance of the chapel. This wall is covered with scenes of the Passion and Resurrection of Christ. Instead of painting the scenes in many panels, as the Giottesque artists did, Andrea carried out the narration of the Passion in a continuous fashion, with the scenes following as in a film. The Descent is on the lower right side of the wall.

This is one of the scenes on the wall opposite to the entrance of the chapel. The Christ Bearing the Cross is on the lower left side of the wall.