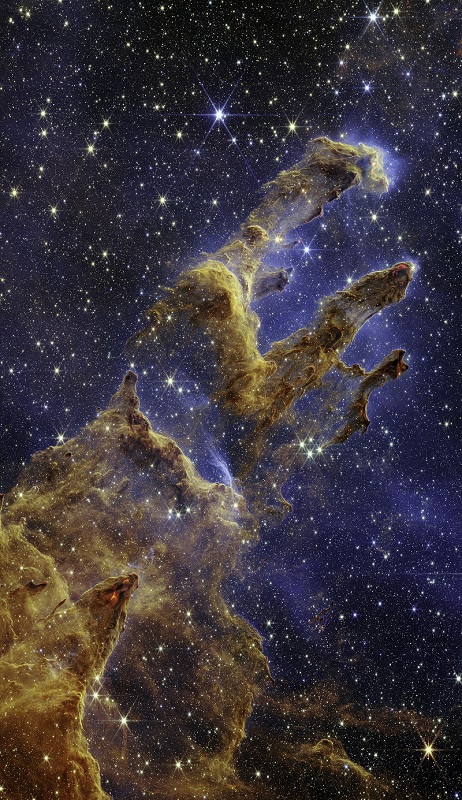 NASA unveiled the new view of the Pillars of Creation by James Webb Space Telescope on Wednesday, October 19.

The Eagle Nebula in the Serpens constellation, around 6,500–7,000 light-years from Earth, is where the Hubble Space Telescope captured the image known as Pillars of Creation.

They get their name because the adjacent newly formed stars’ light erodes the gas and dust, simultaneously forming new stars.

The picture of the Pillars of Creation had a significant impact on the world. It was printed everywhere possible such as clothes and everyday items. The pillars were rendered by Webb brought more stars into view and revealed new contours of the gas and dust clouds. Hubble’s visible-light optics revisited the scene in 2014 to create a sharper look.

NASA says by identifying much more accurate counts of newly formed stars as well as the quantities of gas and dust in the region, Webb’s new view of the Pillars of Creation, first made famous by NASA’s Hubble Space Telescope in 1995, will aid researchers in revising their models of star formation.

They will gradually grasp how stars grow in these dusty clouds over millions of years and then explode out of them.

The $9 billion Webb infrared telescope, which had been in development for over 20 years under a contract with NASA from aerospace behemoth Northrop Grumman Corp., was sent into orbit on December 25, 2021, in cooperation with the European Space Agency and the Canadian Space Agency.

A month later, it arrived at its destination in solar orbit, nearly 1 million miles from Earth.

It is anticipated to revolutionize astronomy by enabling researchers to look farther and more precisely into the cosmos, to the beginning of the known universe.

Space Telescope Science Institute Team Member of the Webb Space Telescope, Dr. Nicolas Flagey, determined a cloud of heated material near the Pillars of Creation to be a shock wave brought on by a supernova in images collected with the Spitzer Space Telescope.

The cloud’s appearance indicates that the Pillars of Creation would have been obliterated by the supernova blast 6,000 years ago.

This would suggest that the Pillars of Creation have already been destroyed, given their distance of about 7,000 light-years. Still, as light moves at a finite speed, this destruction should be seen from Earth in nearly 1,000 years.