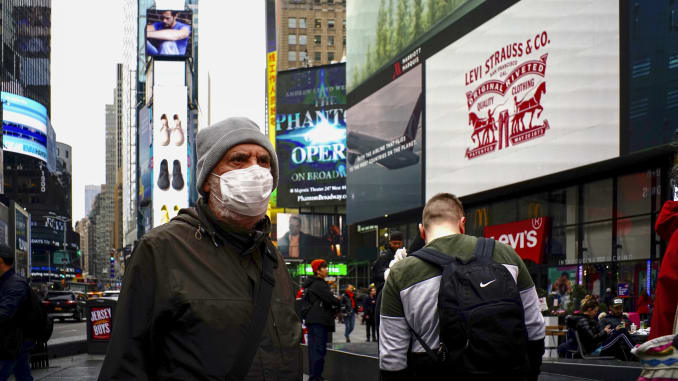 Globally, more than 90,000 cases of the novel coronavirus have been confirmed, with the death toll reaching 3,110, according to the WHO on March 3.

In the United States, six people have now died from the virus, all in Washington State.

The latest U.S. case is a 50-year-old man living in a New York suburb and working in Manhattan, who tested positive and has been hospitalized–the second confirmed case in New York, according to Governor Andrew Cuomo. The patient had visited Miami recently, but had not travelled to countries considered the epicentre of the outbreak, he said.

McKinsey Paz, her husband and her boss at a Vacaville private security company were among those stocking up on water, tinned food, rice, beans and toilet paper.

“We’re not sure what’s going to happen. Panic seems to do that to you,” she says. “In case things get a little crazy, we didn’t want to be the last ones. We’re preparing for the worst.”

The director of California’s Public Health Department has called the case of a Solano County woman who was moved to UC Davis Medical Center in Sacramento on February 19, a “turning point” that signalled increasing difficulty in stopping widespread infection. It was the first U.S. case with completely unknown origins.

So far, 22 patients in the U.S. have been diagnosed with the virus–4 of them, seriously ill, says President Trump.

Health officials in California, Oregon and Washington have reported 4 new cases, with origins being unknown for 3 of the patients, who hadn’t travelled abroad or had known contact with any infected persons. There is increasing concern that the virus is now hitting West Coast communities.

Meanwhile, Trump continues to warn against panic. In a rare televised news conference from the White House on Saturday (Feb. 29) he assured that the risk to Americans from coronavirus remains low.

“Since the start of the outbreak, my administration has taken the most aggressive action in history to protect our citizens, including closing our borders very early–a lot earlier than people wanted us to do–and it turned out to be a good decision. I ordered sweeping travel restrictions, increased travel advisory levels, established screening measures and imposed historic quarantines,” said Trump.

“We’re working very hard to expedite the longer process of developing a vaccine. We’re also moving with maximum speed to develop therapies so that we can help people recover as quickly as possible,” he continued.

“We have a lot of recovery going on. We want to see if we can advance that.”

Clinical trials of the investigational antiviral remdesivir in hospitalized adults diagnosed with the virus has begun at the University of Nebraska Medical Center (UNMC) in Omaha, sponsored by the National Institute of Allergy and Infectious Diseases (NIAID)–part of the National Institutes of Health. The first volunteer participant is an American who was repatriated after being quarantined on the cruise ship, Diamond Princess, that docked in Japan.

There are no specific Food and Drug Administration (FDA) approved therapeutics to treat coronavirus patients. Infection can cause mild to severe respiratory illness, and symptoms can include fever, cough and shortness of breath.

The White House coronavirus task force has been meeting daily, said Vice President Mike Pence, who reported that meetings were also scheduled with leaders of the airline and cruise line industries to “work on the partnership with industry in this country.”

“As the president said many times, we’re all in this together,” he said, noting that Trump understood that industry was a part of the one team in America, in terms of addressing the outbreak.

“A lot of the coronavirus shows the importance of bringing manufacturing back to America so that we are producing at home the medicines and equipment and everything else that we need to protect the public’s health,” said Trump.

“It’s already started, frankly. It started about a year ago,” the president continued, adding that a lot of very exciting things were “happening very rapidly”.

Zar expressed the team’s deep condolences to the families of the deceased victims of the coronavirus.