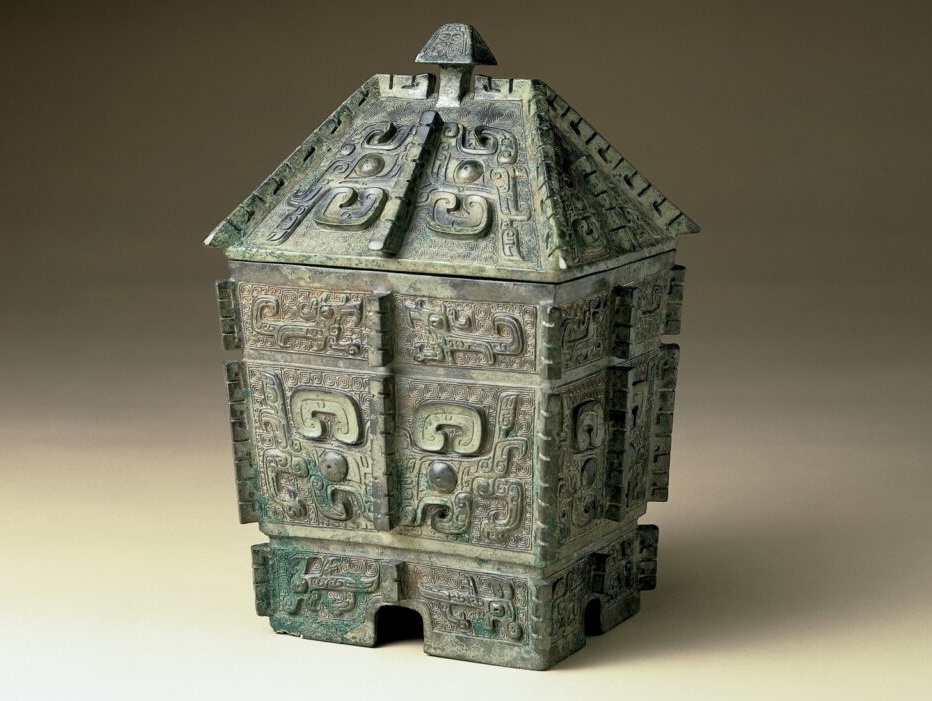 Wine Vessel, Fangyi, 12th Century BC, Shang Dynasty¸ at nearly a foot tall with about half a foot in width and diameter. It’s once shiny, copper colored coat, has been stained with age as it is now oxidized with a rustic patina finish. The vessel itself is carved with beautiful, symmetric, and meticulous detail. Further, the mid section of the vessel looks to have etched and elaborated eyes, as though they are sitting behind a mask. (Image credit: Cincinnati Art Museum)
By Bethany Shepard November 14, 2022 3:13 pm PST
Facebook
Twitter
SHARE
Facebook
Twitter

The nobility of the Shang Dynasty from the 16th to 11th centuries B.C. practiced ancestor worship by presenting their ancestors with ceremonial offerings of wine and food in bronze cups. In ancient China, these vessels were known as fangyi.

The fundamental objective of these ritual sacrifices was to please the ancestral spirits. By performing these ceremonies, the nobility of the Shang Dynasty hoped to ensure the continuation of their predecessors’ dynastic authority.

In accordance with these rites, numerous expensive wine vessels were presented to the tombs of the ancestors. The significance and symbolism of these intriguing and hypnotic Shang bronzes bear deep meaning for those who continue to study them today. .

This form of Chinese vessel, known as fangyi, dates back to the classical and most advanced period of the Shang Dynasty. These vessels demonstrate the technical expertise of the bronze foundries that once operated in and served Angtang, the Shang Dynasty’s capital.Like other Chinese bronzes of the time, the fangyi in the Cincinnati Art Museum was cast in numerous clay molds.

The Chinese metalworkers adorned the wine jars with intricate and precise surface ornamentation. Fangyi’s traditional ornamentation consists of taotie and paired dragons with protruding eyes and horns. This level of expertise gives these constructions a special place in the realm of art history.

Copper is the primary component of bronze, which also contains other metals such as aluminum, tin, zinc, etc. When viewing these pieces today, the  surface of the metal is no longer silvery and reflective as it was three thousand years ago. This discoloration is attributable to corrosion and the metal mixing with air, which has altered the appearance of the wine vessels over the hundreds of years that they have remained.

As a result of corrosion, the wine vessel’s outside is covered in reds, greens, and blues. This can be understood using a penny as an illustration. It is lustrous when it is new, but its color fades over time, looking tarnished.

The lengthy inscription of 187 Chinese characters is an important component of the fangyi’s form, along with its very refined design. To engrave the characters, the ornamental style of calligraphy is utilized. The text displays recurrence within the lid and on the vessel itself.

The inscription reveals that the writing was originally written with a brush and subsequently transferred to the clay model as bronze. During the reign of the fourth monarch of the Zhou Dynasty, the inscriptions suggest that the owner of these vessels was deeply involved in the administrative meetings and religious rites held in the capital.

One of the earliest Chinese writing systems was preserved by the very pictographic and simple inscriptions on Shang bronzes. The Zhou Dynasty, which succeeded the Shang Dynasty, saw a rise in the length of metal inscriptions and a standardization of written characters.

As we can see in fangyi, the individual who commissioned bronze during that era was active in commemorating the event.Therefore, one can look at these wine cups now and be offered an understanding and history of the rituals and ceremonies associated with them, as well as gaining crucial information on  reconstructing ancient Chinese history.