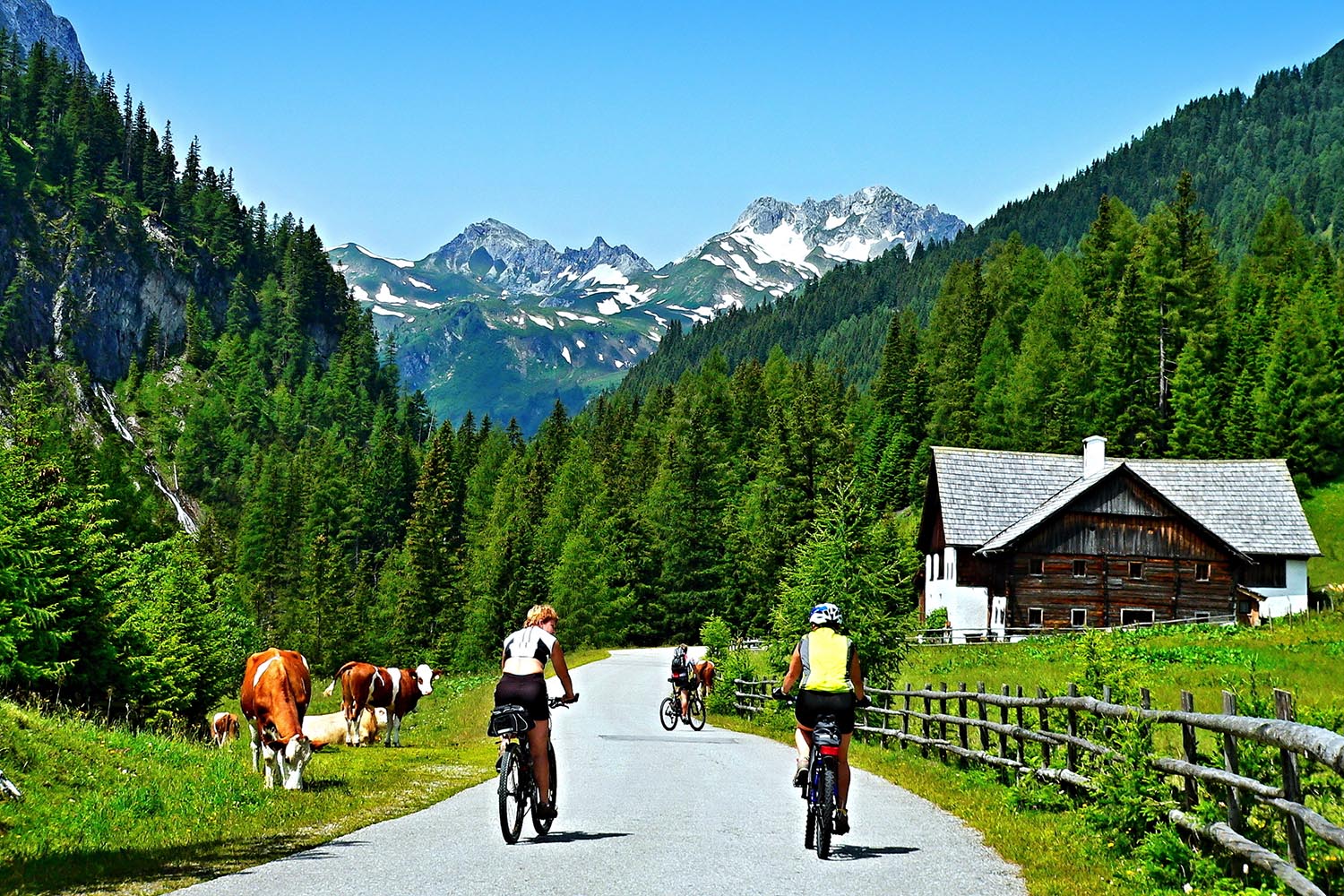 Austria’s deep appreciation for nature, you could say, is grounded in at least 150 years of history. From the Kitzbühel Alps to the dense “green heart” forests of Styria, Austrians’ proximity to nature and long-standing traditions have created a strong national consensus around preservation and sustainability. Ever since the 19th century, Austrians pioneered in protecting the environment by, for example, establishing the first University of Natural Resources and Life Sciences in Vienna, in 1872.

Besides winter sports, hiking, and climbing, Austria has a lot to offer in the arena of cycling and mountain biking. There is no shortage of breath-taking alpine trails—reaching as high as 1,500km—and tranquil riverside routes, and cities across the country are increasingly embracing cycling. The country’s biking tourism is on the rise, with more and more Europeans visiting for biking holidays.

The cycling culture among locals is also flourishing. We’re seeing the romance around the modest bicycle being nourished, as cyclists become ever more a part of the beauty of Austria.

The Central European Alpine country, Austria, can be a nature lover’s paradise. It houses Europe’s largest national park, Hohe Tauern, and some of the most incredible mountain biking trails.

Being landlocked, the country shares its borders with eight European nations, and enjoys it’s fair share of natural blessings. The Danube River—the second longest in Europe—which originates in Germany, nourishes the Austrian landscape. Flowing in from the state of Upper Austria, Danube connects the west with the capital Vienna and Lower Austria—the heartland of the royal Habsburg Empire in the 2nd millennium.

Mirroring the winding river on the vertical plane, are the snow-capped Alps, attracting hikers and skiers alike. Covering 62% of the country’s total area, the majestic Austrian Alps, with three Alpine ranges—the Northern, Central, and Southern Alps—run west to east, bordering Germany and Italy.

From wild mountain ranges to valleys, to spectacular lakes, to alpine and glacier gardens, to the rolling hills and historic fortresses set around the Danube in Wachau, Austria embraces some of Europe’s most wonderfully enchanting natural landscapes. Awe-striking areas of Ice Age valleys, lush heaths and alluvial cones give shelter to a staggering range of ecosystems and biodiversity.

Everything Biking—26,400km of Cycling Trails

Situated amidst the Alps, Saalfelden Leogang, with more than 720 km of biking trails is considered by many to be the ultimate region for mountain biking. Its neighbouring Saalbach Hinterglemm is another great spot, with the legendary Hacklberg-Trail and the World Championship trail. In July 2022, the sixth GlemmRide Bike Festival is set to take place in the Bike Eldorado Saalbach Hinterglemm.

For leisure cyclists, the Danube Cycling Path, stretching over 370km along the riverside from Passau to Vienna, is perhaps the most popular and beautiful route.

Of course, not only tourists but locals also like to make the most of the extensive biking opportunities available in their country. 401,300 bicycles were sold in Austria in 2014 alone, with the sale of mountain bikes, in particular, flourishing (VSSÖ 2015). Almost one-third of all Austrians own a mountain bike, according to a survey in 2015 (Gesellschaft für Konsumforschung).

Austrian cities have been increasingly embracing cycling since the early 2000’s; introducing public rental bikes and cycling counters that display the number of bikes that have passed.

“This is great, great!” says Wolfgang Dvorak, director of 2013 Velo-City, about the counters in Vienna. “Measuring cyclists is making cycling visible, making people notice. It’s very important. This is showing people that Vienna is cycling.”

Faced with rising congestion and pollution levels, Vienna began learning from progressive cycling capitals such as Munich, Malmo, Copenhagen and Amsterdam, by embracing biking culture. As a result, bicycles are becoming more trendy among younger Austrians, with a burgeoning market for old and especially notable bikes.

“They all have a story to tell,” says curator Thomas Geisler of the Museum of Applied Arts (MAK), showing a collection of more than 210 bicycles, owned by Vienna’s famous architect Michael Embacher.

“The bicycle is a machine for perception; slowing you down through a city,” says Geisler.

“For some, it’s maybe a nostalgia for the bike they wanted as a kid, like the old racing bikes or the Chopper. For the cycling community in Vienna, it’s wonderful to see trends in urban cycling being reflected more widely, so that the bike is becoming a mainstream method of transport,” he says.

“We can’t solve our problems with cars,” adds Felcak, highlighting the importance of environmental preservation for future generations.

Cycling in cities is a great way to contribute to saving the environment. Environmentalists say switching from car to bicycle saves on average 150g of carbon dioxide (CO2) emissions per km. The Dutch, for example, avoid roughly 1.41 million tons of CO2 each year through cycling, according to the UN Environment Program (UNEP); an equivalent savings of 54.4 million trees being planted each year.

But cycling’s not just about the environment. As a form of aerobic exercise, it can benefit overall physical, mental, brain and sleep health, while strengthening spatial awareness and navigational skills.

Cycling on mild terrain is low impact and is generally gentle on the back, hips, knees and ankles—as they are not bearing much weight—while still strengthening your legs, hips and glutes. Mountain biking, on the other hand, provides a more intense workout, kicking your upper body and core muscles into gear, as you navigate a multitude of surfaces.

“A little is good, and more is better,” says leading health expert John Ratey, author of his book, Spark: The Revolutionary New Science of Exercise.

“The best, however, based on everything I’ve read and seen, would be to do some form of aerobic activity 6 days a week, for 45 minutes to an hour,” he says. “Four of those days should be on the longer side, at moderate intensity, and two on the shorter side, at high intensity.”

Academics in the Netherlands have calculated that cycling prevents about 6,500 deaths each year and adds half a year to life expectancy.

Researchers from the United Kingdom, likewise, found that cycling to work is linked with a 45% and 46% lower risk of developing cancer and cardiovascular disease, respectively, compared to commuting by vehicle.

However, what may put many people off from city cycling is concern over the risk of inhaling air pollutants.

Although seemingly contradictory, a 2014 study suggests that city cyclists are actually exposed to fewer dangerous fumes than those who travel by car or bus. The research by King’s College London (Healthy Air Campaign) and Camden Council, monitored air pollution detectors fitted to a driver, a bus user, a pedestrian and a cyclist on a busy route through central London.

Another obvious benefit to cycling is the financial savings. According to UNEP, the annual costs of cycling, in Europe, range from US$200 to $340. By comparison, the costs involved in driving a car range from $2,800 to $9,600, based on average annual mileage.

Whether Capital Vienna Or Small Town Weiz—Austrians Are Pedaling

“I am riding my bike to work!” (Ich Radel Zur Arbeit!) has now become a key phrase for many Austrians.

Cars on the Austrian capital Vienna’s roads have fallen, while cycling is flourishing, according to 2017 figures from the public transport operator Wiener Linien.

“The people of Vienna are increasingly using their bikes for everyday journeys,” says Deputy Mayor of Vienna Maria Vassilakou, especially as subways and city trains allow the boarding of bicycles.

In small Austrian towns like Weiz, 40% to 70% of employees live no further than 5km from their workplace. The town’s Austria bikes to work! campaign (Österreich radelt zur Arbeit!) was a huge success in getting locals cycling.

Salzburg, Once Mozart’s Home, Reflects the Romance of Cycling

The western Austrian city of Salzburg—neighbouring Germany’s Munich—is the musician Mozart’s birthplace (1756) and where his childhood and spirit are kept alive, through its museums and festivities.

Salzburg is also one of the country’s most cyclist-friendly cities, with over 180 km of bike paths; the majority on the banks of River Salzach, as well as through lush parks and along idyllic tree-lined lanes.

It’s not uncommon to see local musicians cycling to their orchestral meetings, accompanied by their instruments. Or morning gatherings of cyclists commuting together along the riverbanks. Of course, on weekends, there are the family outings and mountain bikers, heading for the trails and longer nature excursions.

During festivals, a wide range of bicycles, from electric city bikes to mountain bikes, to kids bikes, neatly fill bike lots and nearby streets. Some international visitors, especially from China, often express their surprise towards the European romance for the humble bicycle.

“It’s Your Stage; Your Catwalk”

As well as during the hustle and bustle of bright summer days, cyclists are spotted in Austria even awashed by cold rain or snow, as people from all walks of life opt for the outdoor experience of the down-to-earth bicycle.

But the bicycle can represent more than love for nature or exercise. For some, it’s an extension of their inner personality.

“Your bicycle would fit not only your physical needs but your personality,” says Felcak. “It’s your stage, your catwalk.”

Many Austrians decorate their bikes with flowers, ornaments, or a custom seat or bell. It’s both a way of self-expression and a way of showing appreciation for the benefits that their bike has brought.

Reinvesting some of the financial savings that cycling has offered by maintaining their bikes well and maximizing fun and enjoyment, ensures that the wheels keep turning in Austria for many years to come.